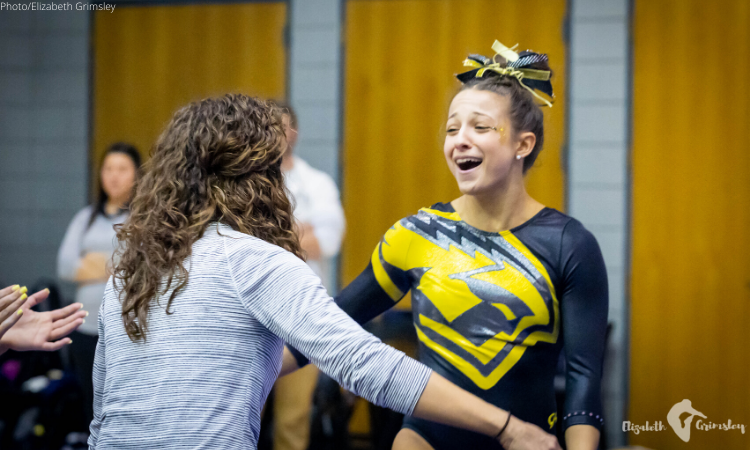 If there’s one thing we would say about this weekend it’s, “You were so close.” Many of the NCGA teams competed against DI/II schools and things looked really well for most of them…until it didn’t. Brockport and Springfield looked strong and were heading into rotation three in first and second, while UW-La Crosse was right up in the mix with BGSU and SEMO. However, things just didn’t quite come together in the third and fourth rotation and although all three teams finished with solid scores and proved they could hang with the “big kids,” it would have been even more exciting to see an upset.

On the flip side, UW-Oshkosh had a big meet down in Texas and became the first team in the division to score in the 190s this season. The Titans were on their game this Sunday and looked much cleaner than we’ve seen in previous meets.

The dynamics, the height, the power—you don’t get much better than this Yurchenko half from Gilot. With a little more control on the landing and the Titan could rival some of the best in the country on the event.

You don’t see too many full-twisting Yurchenkos in DIII, but this one is one of the best. Marshall not only performed the vault well but made sure the judges, even Judy, couldn’t take anything from her landing with a stone cold stick. Check it out at 39:47.

“OMG” of the Week

When we heard there had been an equipment malfunction at this meet, we assumed that meant a screw came loose or peg got jammed—not that the entire set of bars collapsed in the middle of a gymnasts’ turn on the apparatus. Thankfully no one was hurt in the process.

That cake looks so good, we’d feel bad about eating it! But kudos to Ursinus for doing a little something extra besides the typical flowers or framed pics. Now for the important question: What flavor is under all that icing?

The Big Storyline: Rhode Island College saw major improvement this weekend. The Anchorwomen are still struggling to put up scores over 9.000 on bars, but their strong vaults and floor routines make up for it.

Implications: Though RIC is still ranked sixth in the NCGA-East by a few points, it overtook UW-Eau Claire in the overall DIII rankings and is only a tenth behind Winona. If the Anchorwomen keep up their steady improvement, it’s very possible we could see their highest ranking in years.

Records: Rhode Island College scored a 181.650 which was its highest of the season and a five and a half point improvement from its last meet.

The Big Storyline: Both teams had their best meets yet with Hamline improving three points over last week thanks to strong performances from Madeline Sowinski on beam and floor and Tisana Lowe on vault and bars. Lowe competed a huge Yurchenko layout full that will put her right up in the mix for a national title once she learns to control the landing a bit more.

Implications: Though Hamline moved ahead of Ithaca in the overall rankings, the Pipers still need to prove they can keep up with the current top four teams in the WIAC to really be considered a national contender.

Records: On its Instagram story, Gustavus noted that it competed the most major bar releases in program history. It was also the first time the Gusties broke 180.000 this season.