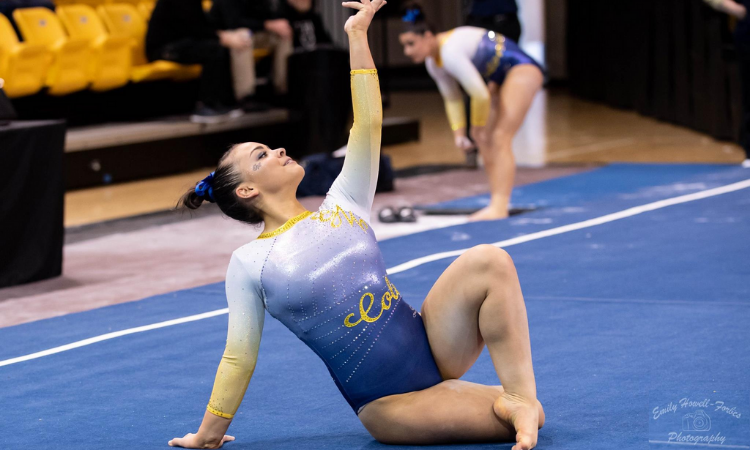 The Colonials are also off to a respectable start but will need to go 194 or better if they want to keep pace with last season’s results (and move up in the oh-so-tight EAGL rankings).

This quad meet will be lived-streamed January 24 at 10:00 PM on UC Davis Gymnastics’ Facebook page with live scores available here.

All right, y’all! I’ve got my MPSF Mule (i.e., Diet Canadian Dry and Kirkland vodka) and a bag of Lindt truffles, so I’m good to go!

This is a single camera stream with no commentary, so I’ll provide as much info as I can as accurately as I can. Apologies for any mistakes or identification.

Belkoff (Sac State): Nice first handstand. Short on the bail. Like that she doesn’t kip up to handstands. A little piked on her DLO, but basically stuck!

Green (UAA): Tight, high double tuck to open. Front tuck to Rudi, well-done. Popa, wolf full, Popa, good amplitude. One and a half and sits the punch front. Too bad, solid routine up til that point.

Matthias (Sac State): Short handstands throughout, but a good DLO with a hop.

(Sac State): Outch, misses the regrasp on her Geinger. Bail is good. Really low DLO to her knees. Too bad.

Okay, ignore all of the above. Wrong meet was playing (damn you, Facebook streams!). I saw the correct march-in and intro and then it switched to a meet from last season without me realizing. Sigh, it’s going to be one of THOSE live blogs, apparently!

Hyderally (UAA): Fhs double full with a crossover step. Front lay to Rudi, gorgeous. Love the loso thrown in there. Fhs full to a front lay landed deep, but she muscles it out. Much improved from last week. 9.525

Okay, well, having only seen two routines, I don’t really have commentary to add beyond all the teams are between three and five tenths back on their respective event’s season high. No disasters, which is always a good way to kickstart a meet!

(Sac State):  Leg up break after switch half. Step after 1.5 dismount.

Ito (UCD): a hair shy on all handstands and bail. Slightly piked DLO with a step back. 9.650

Brent (Sac State): Gorgeous straddle mount, and they cut away. Boo. 9.150, probably because I wasn’t watching.

(GW): FInally, a Colonial! Front full front lay with some legs. I think she bounced out of a double pike, it panned away…

Landess ? (UCD): Another Aggie comes off on a Gienger, ouch! Is it better to land supine or on your legs? Bail. Good last handstand. Tucked Arabian dismount with a step. 8.800

Vault is not the event where Alaska will make up ground; that was a solid rotation for them with their two strongest left to go. Davis won’t be pleased about having to count a fall, but should be pleased about career highs for both Michovsky and Cunningham! Likewise, Sac State can be better on beam, though Braida earned a season high. George Washington finally found its groove on floor, besting its season high be eight tenths.

I saw Nelson (?) with a gorgeous piked Jaeger in the background.

(GW): Yurchenko half with lots of power and a bounding step forward.

Belkoff (Sac State): Nice double pike to open. Popa to wolf full, some feet but positions looked all right. One and a half to front lay with a shuffle on the landing. Good job on the double tuck to close out.

(UCD): beat to split full, back leg very low and a leg up break. Bhs bhs loso, some legs but solid. Small check out of the full turn. Round-off one and a half with a small step.

Hyderally (UAA): Way off on her Pak, has to muscle through the kip half. Good straddled Jaeger. Off center on the full pirouette and sits her double tuck, too bad.

Alonso (UAA): Overcooks a handstand, but powers through. Comes off on her Jaeger, bummer. She was fighting so hard.

(UCD): Bhs loso, leg up but saves it. Cat leap to side aerial, comes off. Split to split 3/4, shy on both. Gainer full, a little wonky on the landing.

Decious? (UAA): Just saw a lay flyaway dismount, so guessing that was an exhibition.

Brent (Sac State): HUGE double pike, great. Switch full to split, good. Front lay to front full, textbook. Double tuck with a slide back to close. She is so underrated; tonight’s beam mishap notwithstanding, she’s such a reliably solid performer for the Hornets. 9.725 (scores are back!)

(Sac State): Great double pike to open. Short on her Popa. Front lay to Barani, nice. Again, not quite hitting 180 on the leaps. Round-off half (?) to pike, good.

Still no scores. Alaska will be counting a fall on bars, which is too bad; that’s where they can really press an advantage. Tough break for Davis having to count a fall on an otherwise well-scoring rotation. Season high floor score for Sac State! What we saw looked great. The Colonials are cruising at this point, with a healthy 1.600 lead over UC Davis after a great vault rotation.

This band version of Toxic is not okay.

Schuelke ? (UCD): Great double tuck to open. One and a half to front lay landed deep. Tour jete half, a hair shy. Switch full, Popa to either a wolf full or an artsy kick jump. 9.675

Sklow (UCD): Double pike, a little sloppy on the landing, but she’s having fun and getting into the music (as is the crowd), so who cares? Really nice front full to front lay. Seriously, excellent choice in music. One and a half to front pike, great. Really fun routine, really drew the crowd in.  Crowd is calling for a 10, which is fun (genuinely).

Cunningham (UCD): Punch Rudi, one of the better ones we’ve seen from her. Round-off bhs 2.5, excellent. Front lay to full, tons of power but stays in bounds. 9.850

Landess (UCD): One and a half to full, excellent. Wolf full, just a touch shy. Round-off double tuck, landed deep but stuck.  9.825

Knapp (UAA): Bhs pike, lovely. Wolf jump to sheep, great. Beat to double stag. Tick tock and scorpion, great. Piked gainer with a small hop. Fabulous beam debut for the redshirt senior with no freaking knee ligaments. Thrilled for her (as are her teammates).

(UCD): Stream glitched, came back mid-pass to see her sit a salto. Love her dance and leap series. On the plus side, the Aggies already have already broken their season high event total.

No surprise, George Washington walked away with the team win. They’ll be thrilled to break 194 and best their season high by nearly a point. Sac State will also be pleased; only two tenths back from UC Davis? They’ll take that. Tough night for Alaska. There were plenty of individual bright spots, though, such as Hyderally and Brown winning beam and AA respectively. Davis struggled as a team, but Cunningham had a fantastic meet, winning bars and floor (as well as earning career highs on both those events).