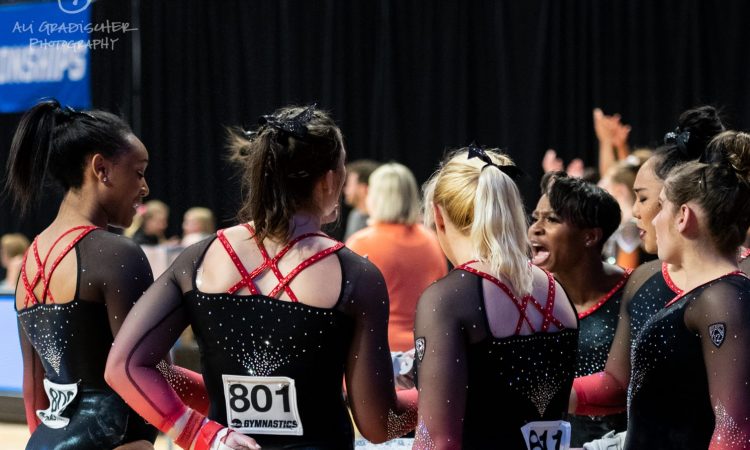 This meet is a fairly close fight this year, especially following the tense resolution of the NorCal Classic in which California scraped a win after counting a fall on floor for a total under 48. The Golden Bears are definitely favored, but it’s not a sure thing.

It’s not a Cal meet these days without some late, strange lineup changes, so I’m expecting the unexpected. That said, I’m hoping for some different faces on bars this year. Nina Schank sat out the first two meets with the flu while Maya Green has been looking beautiful in the exhibition spot. I’m also keeping an eye on Rachael Mastrangelo, who has had a tough start to the season after being scratched on vault in the first week and then becoming suddenly ill in the second. She’s looked great in training this week. Also keep in mind that we haven’t seen anything from Abi Solari yet, while freshmen Natalie Sadighi and Ashton Woodbury are far better than their respective debuts would indicate.

For Stanford on the other hand, the strategy seems to be to focus on steady and reliable. Vault depth is a bit of a sore spot for the Cardinal, but for the most part this looks like a trustworthy squad and one that could pick up wins when better opponents that take more risks falter.

Finally, I’m curious about the battle of the freshman all arounders. Chloe Widner is ranked above Nevaeh DeSouza by a fraction currently, but we still have a lot to learn about this pair.

Updates from the last few days: Nina Schank will rejoin the bar lineup, and we’ve heard that we will not see Aleeza Yu or Rachael Flam again in 2020. Tough blow for the Cardinal if true.

Lawson (Stanford): Maloney with leg sep to bail, maybe a touch short, to toe shoot. Blind full with a soft back and leg break to double back, stuckish. 9.675

George (Cal): This has been great recently. Wow factor in her hair and makeup, very similar kind of vault to the last few weeks. Great technique, small scoot back. 9.875

Waguespack (Stanford): Shy first handstand, toe to Maloney to Pak, tiny leg sep but pretty good. Half turn on the low bar, double lay a little close to the bar and chest down with a hop forward. 9.775

Brunette (Stanford): Seattle girl on deck. Half turn to Deltchev slightly off to overshoot, catches with her left wrist and one foot hits the ground. Double lay is all right with a hop. 9.525

Mastrangelo (Cal): She had flu last week like Schank. One and a half, not hot on the table but nice in the air, one step back. 9.8

Bryant (Stanford): Toe on to Tkachev, bit of knees, Pak nice. Double lay with a step.

Quinn (Cal): Way back on the table, FTY big but closed hips with a hop back. 9.8

Garcia (Stanford): Blind to Jaeger to overshoot, all right, blind to Rudi with chest down and a step back. 9.65

Definitely room to grow for Cal on vault, but Stanford’s bars nightmare is hardly a surprise any more. There are a few alternate routines I’d love to see the Cardinal try since what it’s got here isn’t really working.

DeSouza (Cal): Blind to pike Jaeger to overshoot, all right, bits of feet and shy on a HB handstand. FTDB dismount ugly with leg separation but stuck. 9.825

Navarro (Stanford): Over to one side on the table, pikey again with a hop. 9.75

Kuc (Cal): Maloney to Pak lovely, maybe a touch close but works through fine, hitting handstands. Full out a bit low with a hop to one side. 9.825

Schank (Cal): Got a lot of tape on her elbow. Blind to pike Jaeger to overshoot, beauty, double lay stuck. No rust to shake off there. 9.95

Brunette (Stanford): Elbows very bent on the table, gets her FTY around fine with a hop. 9.825

Hot damn, Cal bars. Tied the program record with a 49.575. The Bears have had some beam issues so far this season but being at home might change how it feels.

Stanford is getting by, 49 on vault isn’t bad especially without Flam.

DeSouza (Cal): Straddle to sheep, not great, front aerial BHS LOSO with a check, one and a half twist. 9.875 okayyy I guess pretending you were robbed on twitter works.

Lawson (Stanford): One and a half through double tuck, chest down, step forward. Tour jete half split full I think, double pike is great. Really good! She’s good at doing difficulty concisely. 9.85

Clausi (Cal): Kickover front, BHS LOSO good. Cat leap switch side, weight back a little and a minor check, side aerial back full and scoots one foot. 9.775

Watterson (Cal): Double wolf, bit of an arm swing, front aerial beat again with a slight adjustment. BHS LOSO with a lean, switch split, side aerial back full nicely laid out and stuck. 9.875

Brunette (Stanford): One and a half front lay I think, double back good. I missed some middle stuff, the feed is a bit jittery for me. 9.875

Stanford floor scores were all over the place. Cal is definitely going 197.

Well, there was a floor situation last week, so not definitely. But I’m pretty sure.

Hoang (Stanford): BHS LOSO, bend check but gets it back. Straddle jump, full turn, front aerial, split double stag, one and a half twist with a hop forward. 9.675

Navarro (Stanford): BHS BHS LOSO, great, full turn with a check. Switch split straddle quarter beautiful, one and a half with one foot shift.

Clausi (Cal): Looks a lot more comfortable doing this floor routine than last year’s. Messy in the air on her full in but landed it well, switch side Popa, one and a half front full. Great double back. 9.9

Bryant (Stanford): Full turn, BHS LOSO, switch switch, front tuck. BHS BHS I just choked. Missed a foot and she was too far back on the beam and landed on her back on the beam after one and a half saltos. Think she’s okay, walked off. But that’s really scary. 8.9

Mastrangelo (Cal): Full in underrotated with a step forward, two and a half back solid. One and a half front lay, punched wrong and sat it. 9

Not the end you hope for but a really, really good meet for both. With a bit more on bars Stanford could break 196, which I didn’t really anticipate being a thing this year. Cal definitely showing that it’s going to be fighting for a nationals spot.