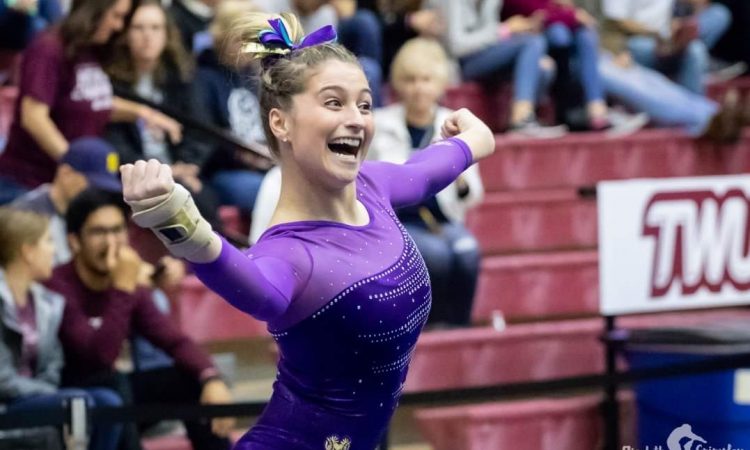 Every USAG team spare Cornell and Bridgeport competed this weekend, and while it was exciting to see everyone back, there’s work to do on most fronts to find the landings and consistency that will help really understand the rankings. Not so with West Chester. The Golden Rams stepped up and took the No. 1 spot with the highest team score of the USAG season thus far. Not content to be a background player any longer, they’ve thrown down the gauntlet for the rest of Division II, and we can’t wait to see who responds next week.

The SEMO freshman had a breakout performance on Sunday, leading her team to its first dual meet win since 2018, registering an astounding 39.175 in the all around and sealing it in with this 9.900 beam routine. Her side somi, back tuck full dismount series is so much fun.

Gasp of the Week

It’s no great surprise that the West Chester freshman is a powerhouse, and she had a spectacular first week in the vault and floor lineups. But what really made our jaws drop is this DOUBLE BACK BEAM DISMOUNT that she whipped out in the exhibition spot. She’s well-poised to crack the main lineup soon, but even if she doesn’t, who cares? It’s risks and victories like this one that make Division II gymnastics so special.

Lindenwood freshman Griswold came out firing in her first college meet, finishing third on vault and second on floor versus two Division I opponents. She showed off a perfectly landed full-in on floor and continues Lindenwood’s tradition of great performance quality, too.

*Penn chose not to contend for the USAG championship last year, despite being eligible. As of now, it has stated it will not contend this year as well. Note that Cornell has not competed yet and thus is not ranked.

The Big Storyline: Defending national champion Lindenwood got off to a tentative but respectable start at Illinois, putting up a similar opening weekend score to last year and beating Division I Temple. The Lions counted a few falls, but we expect mistakes like that to clear up over the course of the season. We’ll also be watching its leap series on floor, some of which were underrotated and at risk of being downgraded. Even with improvements to make, Lindenwood’s superior technique shone through, and it remains a strong favorite to defend its USAG national title in April. We were particularly impressed with freshman Gayla Griswold’s debut, especially her 9.850 floor routine.

Implications: Lindenwood enters the national rankings at No. 50 and the USAG standings at No. 2. It’s not alarming that this score is a little lower than its 2019 postseason marks since most USAG teams tend to start slow and build through the season.

The Big Storyline: Neither Seattle Pacific nor Centenary had catastrophic days in Corvallis, but these will definitely be scores that both teams will want to drop come NQS time. There were some exciting performances from newcomers though, and Centenary’s Cami Bea Austin looks poised for a strong year.

Implications: Seattle Pacific was one of four Division II teams to score a 189 in its opening meet, so there’s a lot of gymnastics to come before we really understand the dynamics there. Centenary is ranked No. 3 among Division III teams.

The Big Storyline: This was not Air Force’s day by a long shot. The defending MPSF champion is currently ranked at the very bottom of the conference. There were bright spots, including freshman Briona Carswell’s 9.850 for a beautiful beam routine and junior Tyler Davis’ return from offseason knee surgery.

The Big Storyline: After some misses on beam, SEMO came up short against Alaska on Friday, but the Redhawks can feel good about a great day by sophomore Anna Kaziska, who won three individual titles. It was great to see freshman Jordan Jones in the bars and beam lineups after she sat out the first meet.

Implications: This team score for SEMO was a little lower, but not enough to badly hurt its average.

The Big Storyline: SEMO roared back to a resounding win on Sunday, due in large part to a spectacular meet from freshman Dahlia Solorzano-Caruso. Solorzano-Caruso’s potential in NCAA has been evident since her Canadian level 10 days, and it was amazing to see her find her zone for the first time, peaking with a 9.900 on beam.

Implications: Kaziska and Solorzano-Caruso are tied for No. 1 in the USAG AA standings.

The Big Storyline: While it was nobody’s dream day, all three USAG teams at the Springfield quad meet showed a great deal of potential. Yale’s Raegan Walker made her long-anticipated debut and picked up a bars title, but the rest of the bars lineup suffered after only one routine from the talented sophomore class made the lineup on any event. SCSU star Hannah Stahlbrodt picked up her first all around win of the season despite a downgraded vault. Brown’s freshmen looked strong, with Jasmine Lee competing the all around immediately, but the Bears had vault and beam issues. That said, defending national bars champion Mei Li Costa added beam to her college repertoire for the first time and produced a hit.

Implications: Yale is in a strong position in the rankings thus far. As for the others, there’s a huge pile-up around the 189 mark that we’ll have to wait a few weeks to sort out.

Controversies: There were no live scores available for this meet and final results couldn’t be found until several hours after it had ended, which bothered nobody else but drove us nuts.

The Big Storyline: West Chester defined the weekend with a shocking, yet absolutely warranted, 193-plus score and topped its opening weekend score record. The Golden Rams followed up their landmark national championship-qualifying season with a beautiful meet in Boston that boasted Division I-competitive difficulty across all four events. In fact, they came within reaching distance of upsetting George Washington. With even more possible freshman routines to add and veterans doing the best gymnastics of their careers, West Chester should be able to sustain this level.

Implications: No. 1 in conference and USAG, duh. West Chester is also lying at No. 45 in the national rankings. Eyes emoji.

The Big Storyline: Texas Woman’s had what felt like a lot of falls at this meet, but it still pulled off a score that is competitive with much of the rest of Division II. It was great to see sophomore Domi Bonzagni make her college debut in the all around after disappointingly missing her freshman season.

Implications: TWU is in the huge 189 clump, and it’s hard to tell whether it will go up or down from here. This team has a lot of new routines and far more depth than last year’s squad, but we don’t know yet whether it has inherited that group’s consistency issues.

The Big Storyline: Penn, never one to make things easy for itself, had a bit of a bars/beam situation at this meet. But there’s a lot to feel good about too, like sophomore Sydney Kraez’ all around debut. Beam specialist Natalie Yang hasn’t missed a routine yet in her college career, and she delivered yet again to add to her individual title haul.

Implications: Penn is ranked third of five ECAC-I teams with Cornell yet to compete. 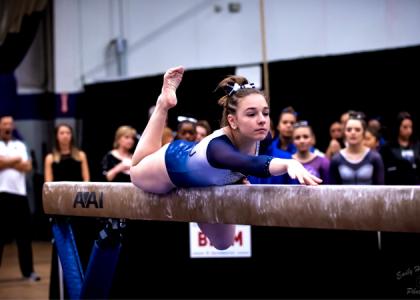