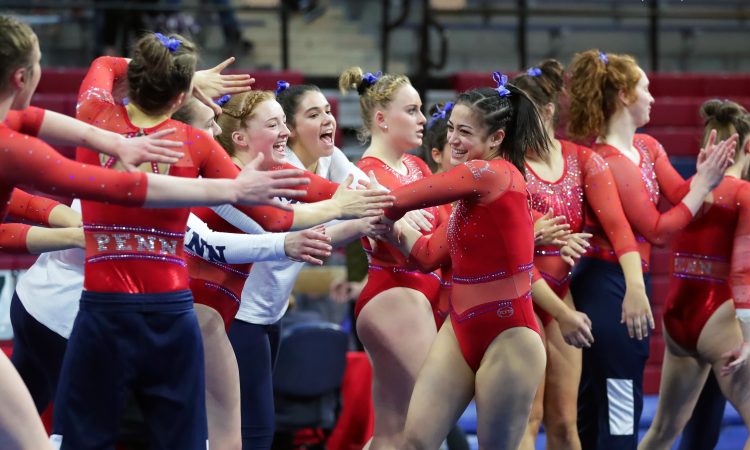 Penn’s season-opening meet left some things to be desired, but a key all around performance wasn’t one of them. Sophomore Sydney Kraez led the day with team high scores on two events and a hit all around debut.

“It was a great experience,” she said. “I’ve been putting in the work in the gym, and I wanted to show it off.”

Kraez’s four event total was the highest out of two all around competitors. She also won vault and floor, the latter routine being one of just two in the whole competition to go 9.800 or above (the other was her teammate Natalie Yang’s beam routine).

Penn didn’t have a consistent all arounder in 2019. Kraez is looking to fill that role in 2020 and beyond, having competed successfully on three events last year. She came close to team records on all of them, but her bars routine was confined to the exhibition spot. She was excited to finally put up a score “for the routines that count.”

Despite the errors from the Quakers, like a beam rotation that counted two falls, Kraez is confident in both herself and her team going forward. “We scored well even with some major and minor mishaps,” Kraez said. “If we support each other and trust each other, we can score better together.”

Head coach John Ceralde expressed similar sentiment. “I’m confident in [our ability on] all four events,” he said. “We made some mental mistakes, but that’s out of the way. It’s time to move forward from here.”