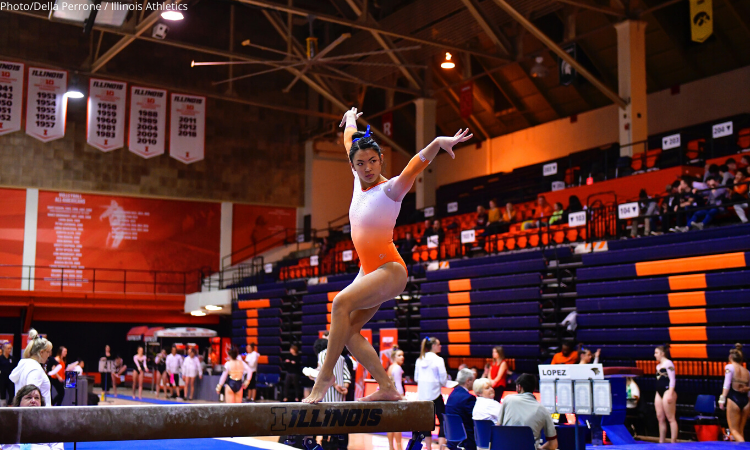 Mia Takekawa looked toward the end of the beam in Huff Hall on Friday, preparing to dismount, and got distracted. She had made it through the most nerve-wracking part of her routine cleanly, and had been enjoying performing the rest of her set.

But now, while taking a moment to breathe and absorb the crowd’s energy for her dismount, she could see yardstick-long gum that was given to kids in the stands for every Illinois stick. All she could think was, “Oh man, I hope I stick this.”

The freshman has quickly become a staple in all four Illinois lineups in her first two meets. To head coach Nadalie Walsh, trusting Takekawa as an all arounder and beam anchor is easy because of her receptiveness and intention in practice.

Walsh thinks of Takekawa not only as a freshman, but as a leader. “She’s one of those athletes that dots the ‘i’ and crosses the ‘t.’”

Illinois’ freshmen are proving instrumental to the team’s strong start in 2020, and have affected a noticeable shift in attitude. That is not an accident. Walsh specifically recruited this class to take the program to the next level. And, as she says, “They’re delivering on their promises.”

The class’ preparedness is also not an accident. Walsh spent significant time this preseason coaching the little things that separate teams at the top. She and her staff didn’t wait for the newcomers to be in a few meets to learn the ropes, they engineered those situations in practice. The freshmen learned how to land, cheer and be invested like collegiate gymnasts. They learned to chant for 10s.

Walsh’s freshmen believe in the vision she has for Illinois. And, as she teaches them, when you believe something, the whole room should know it.

In the gym, Takekawa practices how she competes. Walsh knew she came in with the raw talent to succeed in college, and she and her staff have worked to give her the tools she needs to be excellent. When she’s on the beam in practice, Walsh works hard to find the deductions judges might take. She looks for the little moments, the details that are the difference between good and great routines, from toe point to extension through the fingers.

Takekawa is willing to work those details, and it shows in her mental preparation for competition routines.

Before she mounted the beam in the anchor spot Friday, Illinois already had two falls, one routine with several errors and two 9.9-plus sets. Takekawa didn’t watch any of it. “I don’t want to psych myself out before I even get on the beam.”

She does mental routines while she waits, and she and Walsh work through her keywords. Walsh makes sure she takes a deep breath and tells her to do what she does every day. She tells her, “This is easy for you.”

On Friday, Takekawa responded, “Yep!” and got on the beam.

Gymnastics isn’t the only place where her work ethic and attitude shine. She’s majoring in engineering at Illinois, one of the top programs in the country. When asked how she’s balancing the notoriously tough first year with gymnastics, she said it hasn’t been too hard yet since she hasn’t declared a specialty.

She also called out her upperclassmen teammates who are engineering majors, noting that they’ve been a big help in navigating both worlds.

Takekawa has also participated in gun control activism. She got involved with a group at her high school that organized one of the walkouts in 2019. It’s an issue that hits home to the California native, since so many shootings have happened in that state.

“It just felt like the next one could be us,” she said. She hopes to get involved with the cause in college, too.

It’s partially those details about Takekawa as a person outside the gym that drew Walsh in during recruiting. Her positive energy and character is also part of what Walsh knew made her a special competitor.

When Takekawa dismounted on Friday, after being distracted by the gum, she did stick the landing. She knew it had been a good routine, but didn’t expect a perfect score. It was when she heard her teammates start chanting for the 10.0, and the crowd joined in, that the possibility started to sink in.

“It was just a relief, and happiness and surprise, honestly,” Takekawa said of the moment she saw the score. She cried as her team hugged her, and she felt proud. It was the first perfect score on beam in Illinois history.

One of the team’s goals this year is to break records. Takekawa has already accomplished that in two meets. She doesn’t feel pressure to repeat the score in the future, but she is looking forward to her team continuing to rewrite the record books.

Before meets, she likes to listen to a pump-up song. On current rotation is “Start a Riot” from “Into the Spiderverse.” The lyrics are fitting for the 2020 Illinois team: “Who in here tryna start a riot? / Woo, let’s start a riot, yeah.” They certainly are starting something. 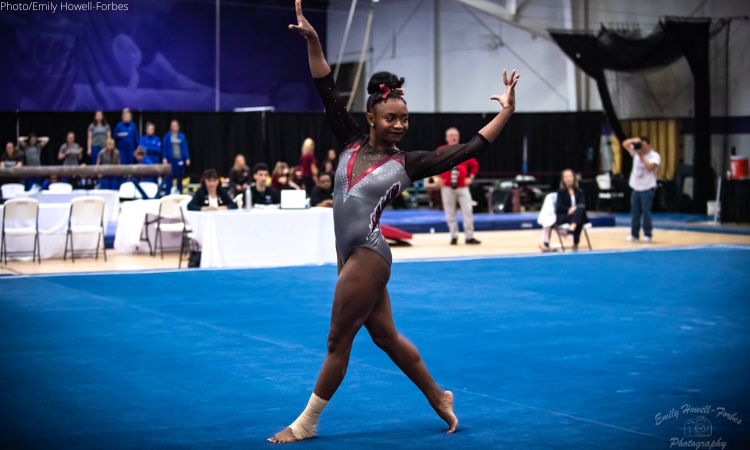 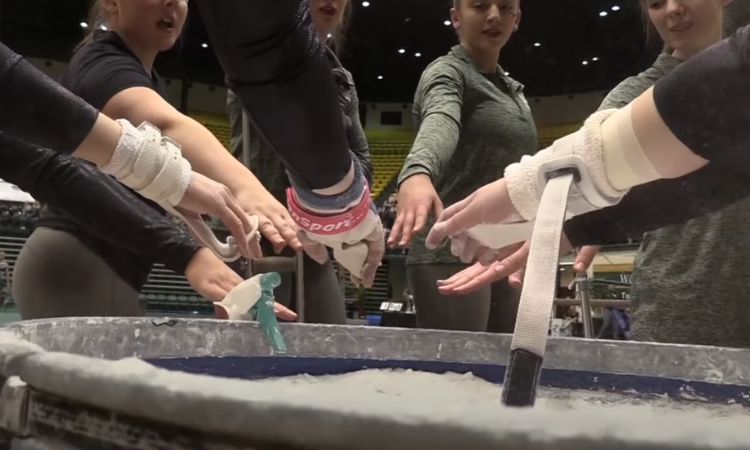