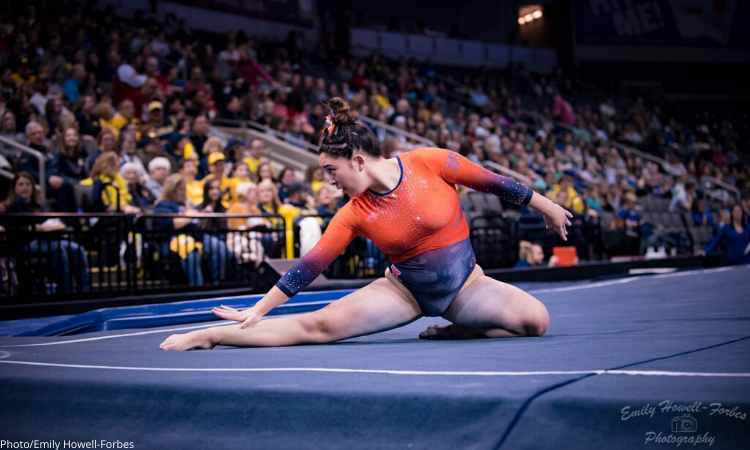 The third Saturday of the season is here, and I’m ready to bring you a live blog of what should be a good Big Ten matchup between Michigan and Illinois!

After the Illini’s super low score in their intrasquad about a month ago, I would’ve never guessed that they would come into this matchup as the higher ranked team. Illinois put that practice meet in the rearview mirror quickly, posting two good team scores in the opening two weeks, one including a perfect 10 from freshman Mia Takekawa on beam. Michigan got its season underway last week, performing well on three events but suffering a missed beam rotation that brought the team score and ranking down. The Wolverines will hope to rectify those beam mistakes this afternoon and put up a higher team score while Illinois will be looking to improve on its consistent first two meets.

Individually, watch for Takekawa from Illinois in the all around but especially on beam. As stated before, she’s notched a perfect 10 on the event already. Also keep an eye on senior Karen Howell and freshmen Arayah Simons for the Illini. Howell is an all arounder who has had some mishaps in her first two meets that she’ll be hoping to rebound from, and Simons has already established herself as one of Illinois’ best floor workers.

For Michigan, Natalie Wojcik will be one of the Wolverines hoping to bounce back from her own beam mishap last week, but she’s also one of the nation’s top all arounders and has a stellar vault. The freshmen duo of Sierra Brooks and Gabby Wilson are also ones to watch. Both are great vaulters, and Brooks notched Michigan’s top beam score in the last meet, and Wilson the top bars score.

Injury wise, Illinois hasn’t had any recent injuries to note. At last Friday’s meet, Anne Maxim was spotted in an elbow brace and Maddy Osman in a neck brace for Michigan.

You can follow along with scores for today’s matchup and find video on both FloGymnastics and BTN+.

No stream yet, but here’s out first look at Michigan’s leotards for the afternoon. I like it!

The stream is up! The commentators just said Illinois hasn’t defeated Michigan in a dual meet in either 30 years or 30 tries. Either way, a crazy impressive streak for the Wolverines!

Waight (Ill): opens the meet with a Yurchenko half with just a step forward. Good hit to start. 9.675

O’Hara (Mich): blind change to jager, great bail to handstand, jumps back to high bar, dismounts with a double layout and a step back, piked at the end. 9.800

Takekawa (Ill): YFull, good height and just a hop forward, piking at the end too. 9.800

The commentators are doing great at saying the scores so far and I LOVE it.

Mariani (Mich): clear hip to tkatchev, great height, not a ton of distance, bail, jumps to high, double layout dismount, tiniest of slides back on the landing. 9.825

Scott (Ill): YFull, piking throughout and a slide back on the landing, but good height again. 9.825

Townes (Ill): another YFull, best body position in the air so far, hops back on the landing. 9.775

Wilson (Mich): jumps over low bar to high, blind change to pike jager, bail with good handstand, winds up for dismount, double layout and a hop back. 9.825

Jones (Ill): YFull, good body position, a little low on the landing but the smallest hop on vault for the Illini. 9.700

Wojcik (Mich): toe half to pike jager, bail, small body break in the air, great final handstand, double layout with a hop back yet again. 9.850

Both teams looked good to start off the meet! Michigan did nothing special on bars, but did its job to bring in a score that the Wolverines should be happy with. Illinois didn’t do anything special either, especially without any 10.0 start value vaults, but the Illini should be solid with that score with no major errors and only some body position issues to fix.

Koulos (Mich): leads Michigan off with a Yfull, near stick but takes a step back, as much height as any of Illinois’ vaults. 9.775

Biondi (Ill): good first handstand, blind change to jager, gets her hands on the bar but comes off, remounts on the low bar and jumps back to the high, restarts, catches the jager the second time, great next handstand and on the subsequent bail, really goes to the final handstand but falls over and takes some empty swings, blind full to stuck double tuck dismount. 8.725

Howell (Ill): can be inconsistent here but can’t afford it today. great pike jager to open, pak salto, half pirouette to low bar squat, blind full to double tuck and a step back, a tad short on all her handstands. 9.700

Bixler (Ill): mounts to the high bar, deltchev a little low, toe on to nice bail, good last handstand, dismounts with a double layout and a step back. 9.725

Again, Michigan did its job on vault, easily outpacing Illinois with four 10.0 start vaults that are executed well. The Wolverines went 49.175 on vault. Illinois had the big mistake early, but bounced back well by hitting its next five routines to erase a potential disaster. The Illini went 48.900 on bars. Aside from one routine, this meet has been void of any major errors and I’m hoping both teams can keep it up considering how great they can be on the final two events!

30 YEARS of Michigan beating Illinois by the way. Crazy.

Borden (Ill): front aerial to fhs, really slow but no wobbles, full turn, double stag jump, bhs to one knee to some nice choreo, beat jump to sheep jump, small check, dismounts with a stuck front full. I’ll be interested to see if they give that acro series credit, if they don’t it’ll ruin what would be a nice leadoff. 9.400

Funk (Mich): opens with a double tuck, high and a good landing, front full to front layout second pass, another secure landing, cleanly through the leap series, dismounts with a punch rudi and takes the lunge on the landing but didn’t need it. 9.800

Wojcik (Mich): double pike to open, large lunge on the landing, tour jete half to split full is nice, second pass is a front double full to front pike, so open in the pike with arms to the side its gorgeous, closes with a rudi to straddle jump. 9.850

Brenner (Mich): mounts with a full-in, low chest on the landing but controlled, RO 1.5 to front layout, good height on the second flip, switch side to popa done well, ends with a double pike, good landing, close to OOB but stays in. 9.800

Brooks (Mich): great full-in to open, no trouble with the landing, RO 1.5 to front layout, clean again, flahses the M in her choreo, looks good in her leaps, dismounts with a well controlled double pike, should be a 9.9 routine. 9.900

Scott (Ill): hoping to keep the momentum going, front toss to pause to bhs and a check, not good considering what the judges did with the other iffy connection, switch leap to split jump, great extension in her legs, cat leap to front aerial, cartwheel to gainer full, sticks. I’m nervous about that acro series. 9.800

Wilson (Mich): mounts with an open full-in, who even needs to grab a tuck? front layout to front full with a controlled landing, super high leaps and a secure landing, finishes with a double pike, slightly short and takes a step forward. 9.825

Takekawa (Ill): here we go! side aerial to bhs, looked off but not a bobble, switch leap to gainer loso, small side check, full turn with a small wobble, bhs to gainer full and the third stick in a row. 9.875

Koulos (Mich): switch side to split full to open, flashes the M before a front layout to front full, some leg form issues but a good landing, switch half to wolf full, a tad short of rotation, closes with a stuck double pike, chest a tiny bit down but a hit overall. 9.725

Illinois rebounded very well after the opening missed acro series, but gave away tenths it didn’t need to. Still, the Illini finished with its highest beam total of the year with a 49.100 without a Takekawa 10. Michigan continued its consistency, posting a 49.175 that matches its vault total and is higher than last week’s floor total. The Wolverines have put themselves in a great position for a high score if they’re able to dismiss the beam issues from last weekend.

Mariani (Mich): joins late, side aerial with a check, bhs loso with a small side check, beat jump to switch side, very secure, dismounts with a RO 1.5 and a step forward. 9.700

Farley (Mich): bhs loso loso to open, no problems, split jump to split half, small check, great 1.5 turn as usual, side aerial to split jump, dances out of a wobble, gainer pike dismount with a small slide back. 9.800

Howell (Ill): to the tune of Toxic, front tuck through to double tuck, chest a little low, switch side to split full to wolf full, all done well, dismounts with a double pike, low chest but stuck it. 9.775

Brooks (Mich): bhs loso loso, gets great height, switch leap to switch leap, nice height again, front toss, dismounts with a RO double tuck and just a small slide back, kicks out of it so high. 9.900

Scott (Ill): mounts with a front double full, hoppy front foot on the landing, front full to front layout, legs were so tight together, switch ring to tour jete half, ends with a nicely controlled rudi. 9.725

Funk (Mich): bhs loso, switch half, super high and actually gets it around, beat jump to popa, no problems so far, dismounts with a side aerial to stuck layout full. 9.900

Judges having a little convo about Funk’s beam, not sure why.

Wojcik (Mich): front aerial to beat jump, really nice toes in her choreo, switch leap to split jump, super clean, bhs bhs loso, so smooth, cat leap to side aerial, dismounts with a RO 1.5, a bit short so has to take a step back. Still, beautiful routine. 9.825, too low in my opinion.

Biondi (Ill): mounts with a great double pike, front layout to front full and sticks it, switch 3/4 to straddle full, cleanly around, double tuck to end, slightly slides back and a little chest down. 9.800

O’Hara (Mich): clean full turn, aide aerial bhs, big bobble to the side, bends over at the hips, split jump to double stag, small check, side aerial to 1.5 dismount, steps back. 9.675

Waight (Ill): front tuck to double tuck, slightly short so steps forward, good leaps, RO 1.5 to front tuck as a side pass! dismounts with a double pike, slow on the rotation and falls to her hands and knees, not the way the Illini wanted to finish up but has a good score already.

Overall, it was a good meet! No team counted a fall or any major errors, so both teams should be happy with this afternoon’s performance. Michigan was able to prove last week’s beam rotation was a fluke, while also improving upon last week’s bars and floor totals as well. The additions of Brooks and Wilson to this team this year already are paying off, and should continue to into the postseason. Illinois’ score falls right in-between its previous two scores, so it should be happy with its consistency so far this season. Beam is easily the Illini’s best event, so they needs to clean up the little errors and maximize on the Takekawa effect as much as they can. Also, adding vault difficult would be helpful, but looking at the fulls today, I’m not too optimistic that any upgrades are feasible.

Thanks for following along!