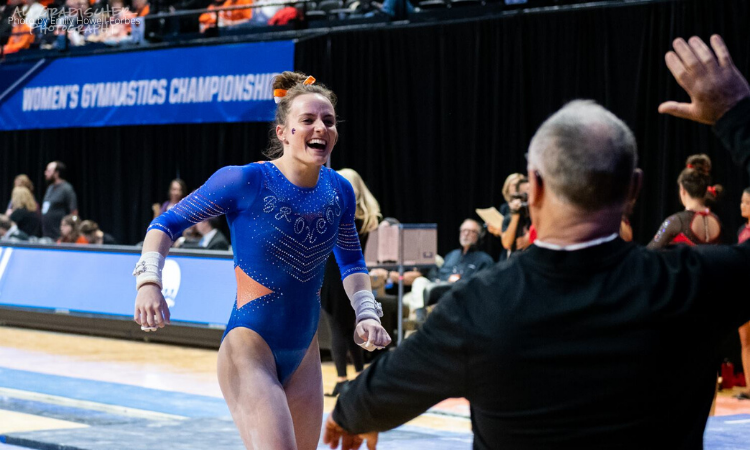 Every December, when most people are making their Christmas lists and checking them twice, die-hard gym fans across the country are compiling their fantasy gym drafts. This will be the fourth year I am joining in on the fun, and each year it has become more enjoyable as my knowledge and understanding of the different athletes and teams has improved.

Like pretty much every ’90s kid I know, I fell in love with gymnastics watching the Magnificent Seven win team gold at the Atlanta Olympics. Since then I was mostly an elite fan, following along with each consecutive Olympics and world championships that came after. It wasn’t until 2012 that I started to wonder what happened to my favorite gymnasts once the Olympics were over, or what happened to the ones that didn’t make the team.

Initially, I only followed the teams with athletes I knew from elite and didn’t pay close attention to anyone else. As someone who was never a gymnast herself, I didn’t really understand the rules or code for college gym, so finding an element of familiarity was key when it came to keeping my attention. I had no real motivation to expand my viewing until I decided to try my hand at a fantasy gym team.

All of a sudden I had to follow multiple teams and try to make determinations about who to put in my lineup, which required watching training videos and keeping an eye on the team social media for clues about who would be competing. I started to follow more athletes, become more familiar with their routines and notice when upgrades happened. I made it a point to record the meets I was able to find on TV, just so I could watch one of “my” gymnasts compete, and I felt like a proud mom when they did well. I started to appreciate the fact that the goal was more about striving for perfection and competing for the team as opposed to putting together the most difficult routine possible and only competing for yourself.

Each year I did a little more to prep for my draft and to strategize for the gymnasts I wanted: Did I want to focus on all arounders or event specialists? How many one- or two-event gymnasts could I have on my team before I started hurting on other events? I searched for good trade or late-season pick-up opportunities. I researched athlete stats on sites like Road to Nationals, read College Gym News’ Stock Market articles and borderline stalked preseason videos.

I soon realized that I wanted to know even more, and began following people who covered it on a regular basis (like fellow editor Rebecca, who seemed to live blog every meet I cared about watching and then some). I went from someone who basically only knew who Bridget Sloan was to someone who was screaming in happy (and sad) disbelief at her TV when Oregon State bumped Florida out of nationals last year. I was completely hooked on the fantastic drama of it all, which felt even more earned because I had been following both teams all year long.

Perhaps my favorite unexpected benefit of playing Fantasy Gym was the fact that my team was mostly made up of gymnasts who I didn’t know as much about and who were from teams that don’t get as much coverage. I began to follow teams like BYU, Boise State and Arizona in addition to the big ones I was following regardless of whether or not I had gymnasts on my own fantasy team. While everyone hopes to get Kyla Ross or Maggie Nichols on their roster, the stars of my team were gymnasts like Shannon Evans, Sarah Means and Alex Hyland. I imagine I’m not the only one who became a fan of gymnasts and teams who I otherwise would not have if it weren’t for playing along. It has created additional exposure on teams who typically don’t have the spotlight on them, which can only continue to grow the popularity of the sport as a whole.

The fact that I went from a four year fan to someone who is now covering the sport (sometimes I still can’t believe that’s true) shows how much my own passion and respect for gymnastics has grown. I chalk so much of that up (pun intended) to deciding to sign up to play fantasy gymnastics four years ago, and I am excited to continue playing along for years to come.