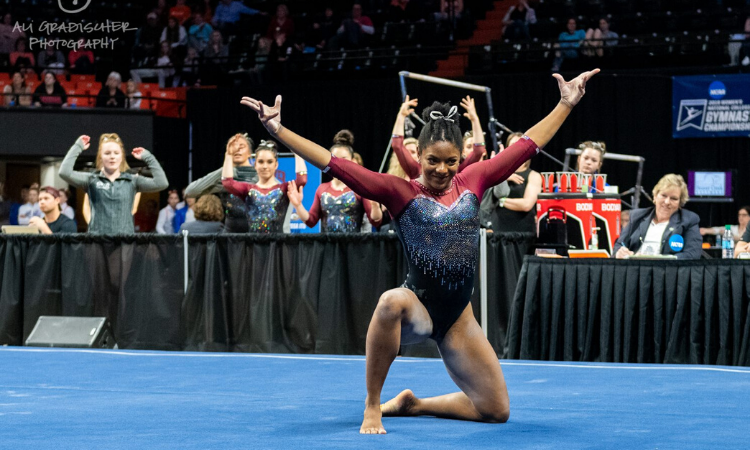 The gymternet can rejoice for we’ve received good news: Fantasy gymnastics is back for the 2020 season! Drafts will open this week and will be due on December 31, so it’s time to start preparing! But what if you don’t have the time to compile a list of 200 gymnasts, let alone put them in some sort of sensible order? Or what if you just don’t know where to start? Fantasy gym is a great way for fans to learn more about the sport, so we don’t want anyone to miss out. We’ve put together four sample drafts in case you’re stuck or don’t have time to create your own.

These drafts are data-based and the methodologies for each are included below. Since they are meant to be used as a starting point, we’ve included more than 200 gymnasts in each one (with the exception of the Freshmen draft) in case you want to remove anyone you think is too risky to draft. We’ve also included notes about injury history or other relevant information that may impact a gymnast’s lineup-making potential; it’s a good idea to watch social media or intrasquads to keep an eye on these gymnasts prior to the draft deadline! These notes will also be updated as new injury information becomes available.

Are you the type of fantasy player who doesn’t want to have to worry about whether or not a gymnast will be in a lineup? Do you value an athlete who can consistently score a 9.825 over someone who is just as likely to get a 9.650 as a 9.900? If so, this is the draft for you!

Are you surprised to see Lynnzee Brown first overall? It turns out she was the most consistent gymnast in women’s college gymnastics last year. All but two of her scores in the entire season were 9.800 or above, and her lowest score was a 9.750! While she may not score as many 9.975s and 10s as Kyla Ross, nobody can top her for her consistency.

A quick note about Maggie Nichols: Using her 2018 data, she would have been first overall. However, she was hurt or rested for much of the 2019 season, sitting out vault until the postseason and floor until nationals. If she competes all four events at the upcoming intrasquad, it’ll be very tempting to move her to the top!

Gymnasts were evaluated per event using 2019 data except where noted. Freshmen were not considered. For each event, a gymnast received credit if she met the following criteria:

If the gymnast met that criteria on an event, her season average on the event (not the NQS—more scores count in fantasy gym than just the top six!) was counted toward the final score. For example, Kyla Ross had hit rates of 81.25% (vault), 93.75% (bars), 100% (beam) and 100% (floor), so she met the criteria on bars, beam and floor. Her final score was the sum of her season averages on those three events, or 29.791.

Only 91 gymnasts met the above criteria on at least one event, so they occupy the first 91 spots in the draft. To fill out the rest of the draft we used the following criteria, again for each event:

The first draft was all about being safe, but how about a draft for those of us who like a little more risk? This draft rewards gymnasts who may not be in the lineup every week or who may fall just as many times as they hit, but every time they go up you know there’s a potential for a 9.900-plus score.

You’ll notice the usual suspects at the top, though in a very different order. Maggie Nichols vaults up to No. 1 in this draft; even though she didn’t compete vault and floor often, she could always be counted on a high score when she did compete. Other beneficiaries of this draft include Courtney McGregor, Nia Dennis, Kyana George and Evanni Roberson, all of whom had max scores of 9.900-plus on all four events in 2019.

Gymnasts were evaluated per event using 2019 data except where noted. Freshmen were not considered. For each event, a gymnast received credit if she met the following criteria:

If the above criteria was met, the gymnast’s season average on the event was averaged with her max score and counted toward the final score. For example, Shannon Evans competed all around the entire year, with season high scores of 9.950 (vault), 9.950 (bars), 9.875 (beam), and 9.950 (floor). She therefore met the criteria on all events but beam. Her final score was the sum of the following, which comes out to 29.704:

You may have noticed that we left freshmen out of the first two drafts—since they were data-based, it didn’t make sense to attempt to fit freshmen (who have no collegiate data) into them. However, one of the keys to success in fantasy gymnastics is to correctly predict which freshmen are going to be instant stars, so here is a draft dedicated to all the freshmen. This can be used to create a freshmen-only team, or it can be woven into an existing draft of returning gymnasts.

The methodology for this draft was less exact than the previous drafts. Gymnasts were evaluated per event using J.O. data from the 2019 season (late 2018 to spring 2019) except where injury prevented full participation, in which case data from the 2018 season was used instead. Estimates were made for gymnasts that did not have J.O. data during this time period, including elite and international gymnasts. Z-scores were calculated for each event using the season averages and the season highs for each gymnast. Z-scores were then adjusted for each gymnast based on potential to make lineups and the potential for overscoring or underscoring in NCAA (based on the gymnast’s school). The gymnast’s adjusted Z-scores on each event were then added together if they were greater than zero. That way, a gymnast with star potential on two or three events could potentially be ranked above a gymnast with average potential on all four events.

This final draft is a combination of all of the three above drafts, so it takes into account consistency and high-scoring potential for both returners and freshmen.

For returning gymnasts, the rankings in the first two drafts (Consistency Queens and High Risk, High Reward) were averaged. In the event of a tie, the ranking from the Consistency Queens draft was used as a tiebreaker. For example, Lynnzee Brown and Kyla Ross tied with an average ranking of three, but Brown won the tiebreaker because she was ranked first in the Consistency Queens draft. The top 75 gymnasts on the Freshmen draft were then added intermittently. Their placement in the draft was largely arbitrary and not based on any sort of data other than preserving their order within the Freshmen draft.