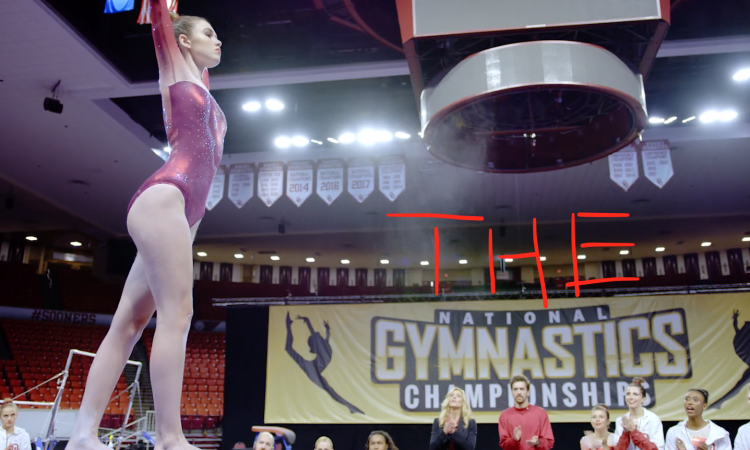 Avoiding things online is hard. You get a sort of picture of a situation through some vague tweets. You hear it mentioned by a peer or coworker in passing and understand it a little better, but dismiss it as something you don’t care to see. Then, it shows up on your timeline in its original form. You scroll past it at first, but if you’re like most of us whose morale has been weakened by years of the instant gratification we’ve come to expect from technology, you just go ahead and face it. What’s the worst that could happen?

I asked myself this innocent question when I pressed play on the trailer for Full Out 2. As someone who’s constantly learning the many quirks of gymnastics, I have not once laid eyes on the first Full Out (if that does, in fact, exist). So the bar for this seminal film was effectively on the floor.

(Well, that’s not true. It was a little lower when I saw the medium. I mean, Vimeo? The last thing I watched on here was one of my film major friend’s end of semester project.)

So there’s really buildings that look like this in the state of Oklahoma. I thought the “campus” was a Hollywood set backdrop they roll away to reveal an endless swath of plains.

We learn that OU has its sight on THE nationals. As in, THE Ohio State University. Or, how in THE world am I going to make it to the end of this?

Yeah, there’s no way the speech really went like this. I’m thinking: “We’ve only won one ~natty~ and it was a tie with someone else. This year is all about selling our souls to Satan so we can win outright. Boomer Sooner!”

We all know how talented Brenna Dowell is, but this movie shows us she has the power to change leos, scrunchies and literal FACES mid-skill.

Let’s get a closer look at the queen who’s in charge of it all.

This KJ looks a little too Fox News commentator/soccer mom to be authentic, but I see the resemblance. And I can fully get behind the idea that she had an Apple Watch before it was cool.

As for things that are NOT cool…

I go to a Divison I school, and I’ve not seen one athlete dress like this. They don’t give you hundreds of dollars worth of apparel for you to wear cardigans and cutoffs to class.

That’s weird, looks like a commercial for a performing arts high school got superimposed with this trailer. Must be an editing mistake.

We get a look at the studio card, so it’s Turning Point Of The Trailer time.

Ah yes, Deverett Media Group. Between you and me, they were supposed to do the new Star Wars, but production schedules conflicted with this one.

Yup, she left, never to be seen in a 10 mile radius of Norman ever again.

KJ’s so shocked by this, she needs to check her pulse to see if she’s still alive.

With its star gymnast selfishly pursuing her own dreams and KJ…in the hospital, probably…the team doesn’t know how to act.

Well, sheesh. If I’d known this was all it took to be an extra in a gymnastics movie, I might have taken that casting call a little more seriously.

That would be my face if I was forced to wear a bucket hat, too. I also love the blatant Nike product placement that probably payed for 85% of this film’s budget.

…maybe if you fixed those bent legs, you would have. 🐸☕️

Well, now we know what that Nike revenue paid for. I love how she’s the only individual worthy of a name card to identify her.

Looks like this will be yet another movie that uses the tired trope of employing people of color only as a vehicle for teaching the white people a lesson. Very disappointing to see (as if nothing else in this trailer has disappointed me yet).

But, I mean, the real 2016 OU team was a diverse group, so I’m sure they’d have handled this with a little more sensitivity. Right?

We go now to the Lloyd Noble Center, which is hosting nationals for the first time since never because it never hosted nationals. I loved that meet!

This schlocky logo looks like the banner for a Dance Moms competition. Not an NCAA label in sight, too. Can’t imagine why they wouldn’t want to leave their mark on the cultural touchstone that is this film.

Call me cheesy, but I actually enjoy cameos. This was KJ’s reaction when she saw the free publicity OU is getting from everyone talking about this god-awful trailer on Twitter.

I didn’t know Maria Caire was in this!

The atmosphere in here must have been LIT. Just look at that crowd.

Also, I know money was tight, but y’all could have at least bought some house plants to really create the “nationals” atmosphere.

It’s a key moment, but they can’t give away the ending here (you know, for the four people that don’t know the actual outcome). So instead…”Alexa, play ‘Old Town Road…'”

…they cut back to the club where the gymnasts are doing their choreo (??) for everyone who didn’t want to see it. Reminds me of me telling my life story to people I met five minutes ago.

Now I see why they did a whole photoshoot dedicated to cowboy boots.

Let’s meet back here and do it all again when the actual movie comes out. I’m sure there won’t be much else to talk about in the two hour (*shrinks into fetal position*) version of this, but I’ll think of something.