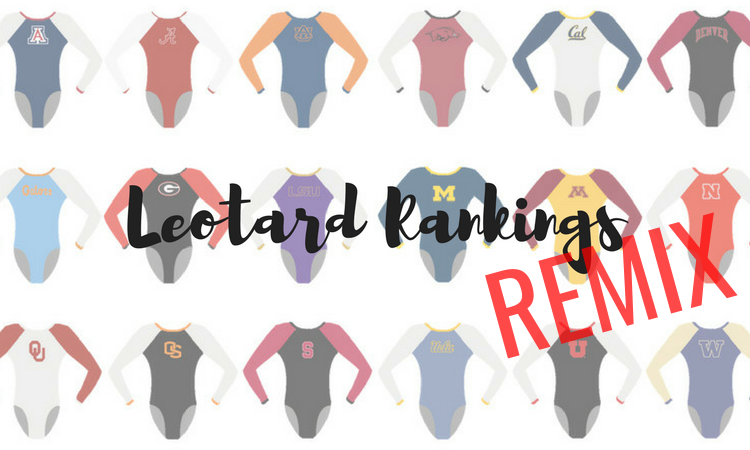 A few weeks ago, the CGN team somehow found itself discussing synchronized swimming (now renamed artistic swimming) swimsuits, and how they would do if they were leotards. Now, the synchro fashion trends and requirements are quite different from the gymnastics ones, but in the end, it is also a lot about design and sparkles.

And of course, we discuss whether or not college teams could pull some of these looks off. The judges are Editor-in-chief Elizabeth, managing editor Emily M and Christina, our synchro-expert.

We didn’t bother to put these in score order, because…well you’ll see why. 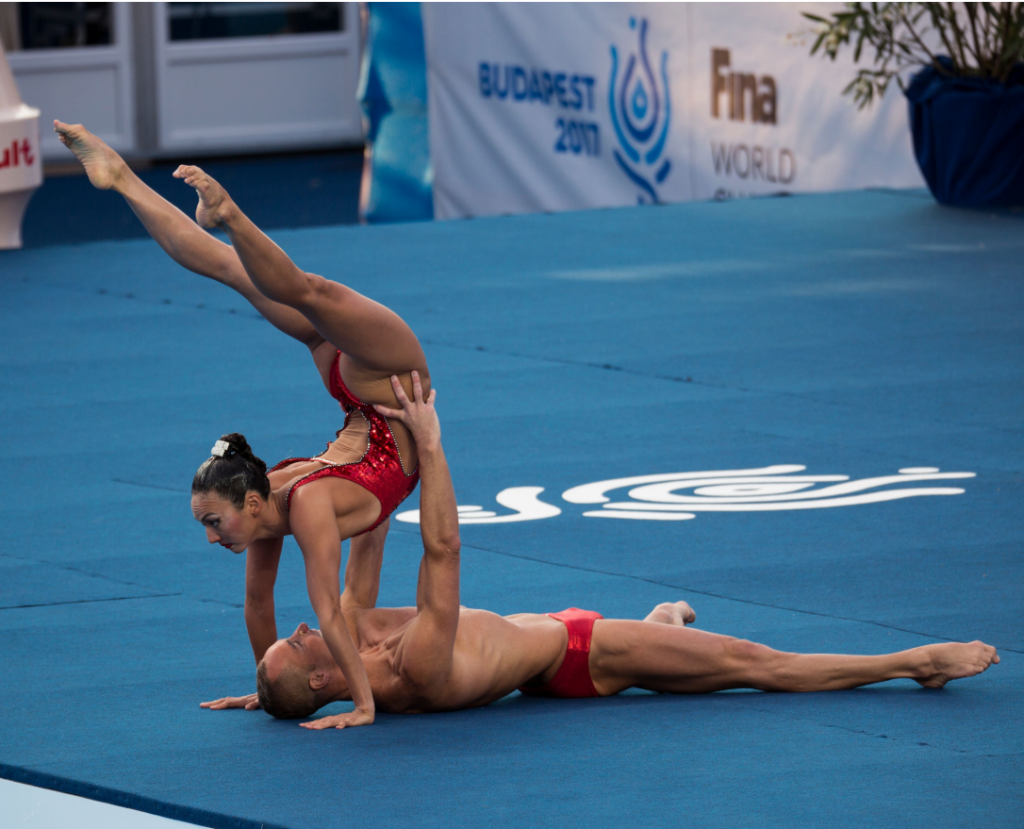 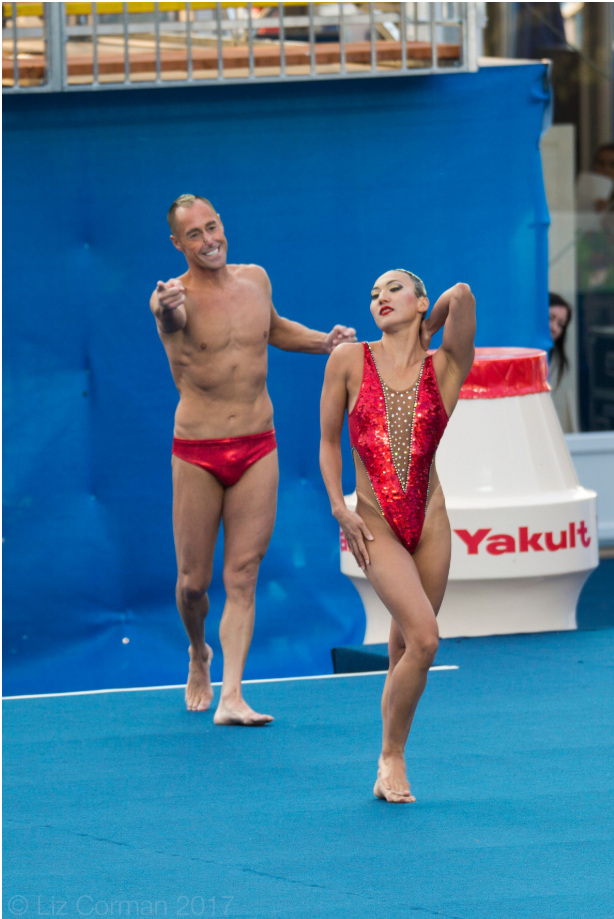 The routine was set to “Baby Did a Bad Bad Thing” from Chris Isaak, and the swimmers wanted to “showcase the American spirit and a little bit of rock ’n’ roll.”

Christina: I love the shade of red used, but there is way too much mesh for me, even though mesh is everywhere in synchro but when there is more mesh than solid, it’s a bit much. As for gym, this screamed Nebraska to me, mostly due to the very deep V neckline in the front and in the back.

Emily M: I’m pretty sure you’d be arrested if you wore this to a public pool. That’s a lot of butt. I get what Christina and Elizabeth are saying about Nebraska, but imagine it in blue and it’s 100 percent UCLA. Remember our brief glimpse at the Under Armour warmups? Yep, now you do.

Elizabeth: I’m afraid that this is going to be the tamest suit on the list. But I’m also here for the full-on sequin design. I 100 percent could see Nebraska wearing it. Red? Check. Lots of bling? Check. Low/high-cut? Check. The suit chooses the team. Or something like that.

There wasn’t a particular theme to this one, but they did swim to Vivaldi’s “Summer” from the Four Seasons.

Christina: This has been one of my favorite suits. I love the white, the light colors used and fake lace on the side The whole look is something UCLA could probably come up with in the Miss Val era.

Emily M: Still a little mesh-heavy for me, but I get that synchro is more in that direction. That aside, this is beautiful! I love the vibrant colors against the white. It feels very recent Auburn to me, with all the intricate details and florals.

Elizabeth: OK, this actually isn’t terrible. With the exception of the mega (supposed-to-be-there?) wedgie, I like the design and the back hole. For the team? Hmm… I want to say UCLA? I feel like it’s only a matter of time until the Bruins debut a doily leo of their own. I’d also like to note that this falls RIGHT in with Italian elite gymnastics, too, and it’s perfect.

The routine was set to “Thunderstruck” by AC/DC.

Christina: A swimsuit with a built-in zipper?! A leather-y upper bodice? This is so different from anything we’ve had in the sport that I’m obsessed, no matter how crazy this is. The zipper did remind me of Nebraska, and it does already fit the school colors.

Elizabeth: The most shocking thing about this suit is the lack of skin exposed by those wearing it. Also literally every one of these is going to be Nebraska or UCLA, aren’t they?

Christina: I am used to seeing all kinds of synchro suits, but I don’t really have many words for this one. This is a very “in your face” and questionable look, so maybe ASU in the early 2000s? I mean, it did have essentially a pitchfork leo, after all.

Emily M: You should all know that this is legend around CGN. The almost Sistine Chapel hands. The anatomically correct heart. The rib cage. It is beyond in every sense of the word. And also makes no sense whatsoever. Obviously BYU.

Elizabeth: I can’t decide what the most outrageous part of this suit is: the actual anatomical heart or the Michelangelo hands. I feel like this leo has to be for a school that doesn’t currently have a gym team, like RISD or something.

She was swimming to “Survivor” from the Lara Croft movie soundtrack, so she was portraying a warrior.

Christina: This is maybe a bit too tame for me as a synchro suit, but I like the asymmetry of the look. Iowa does pull off black leos quite well, but I could also see UGA in it as the GymDogs do like their black as well.

Emily M: There’s sort of a lot going on here, and by now you should all know how I feel about nude mesh. I will also never get over how high cut these things are yikes. Certainly this fits with Iowa’s classic black and nude looks.

Elizabeth: If Catalina Ponor was an artistic swimmer, she’d wear this leo but without the nude mesh parts. It’s 100% an Iowa leo. 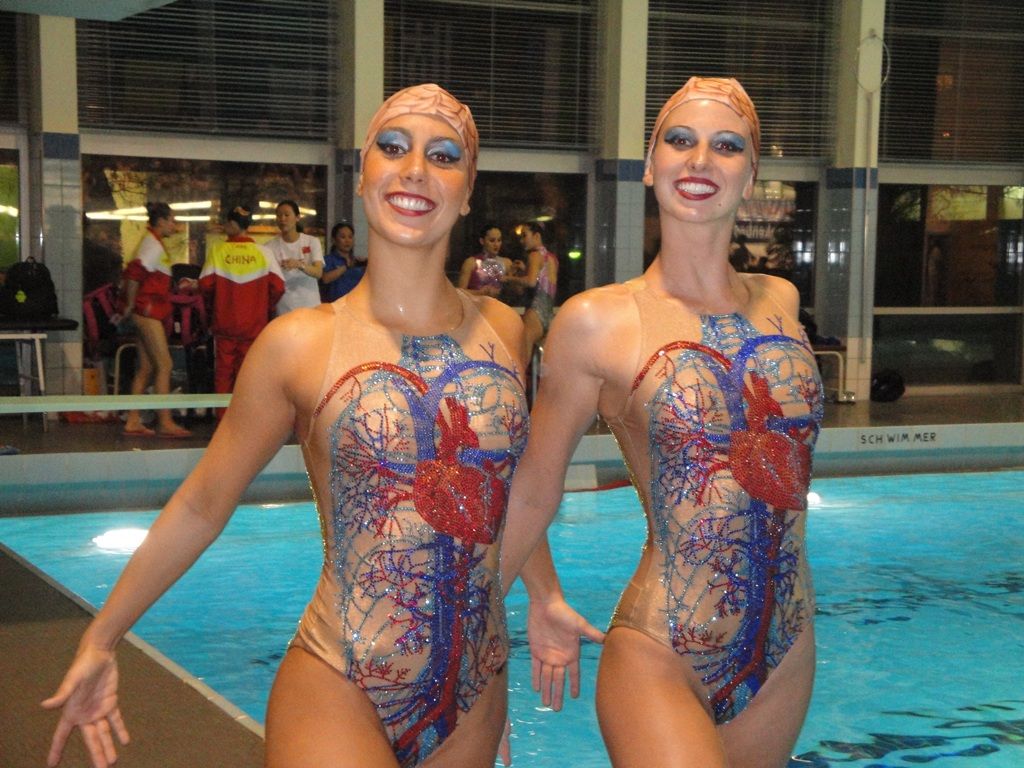 Christina: I can’t say I love it, but I have to admit it’s well-done, unique, and so shiny. I could have gone without the brain headpieces though. As for who would wear this…. A team with a lot of athletes in the pre-med track?

Emily M: Why with the anatomical hearts?! I appreciate that this sticks to a single theme, though. The all-nude look is a little weird, and I personally wouldn’t want the design going down my crotch but hey that’s just me. I don’t know what team would wear this, though! Maybe Alabama? Stay with me: the intricate crystal pattern.

Elizabeth: Now we’re talking! No random slightly grasping hands to distract from the veins and organs! This is definitely a team like Yale where there’s lots of smart people and whatnot.

Christina: This is such a gorgeous suit, and I love the intricate details that make the feathers look so real. And all the sparkles! For some reason, I’m picturing Jade “If Looks Could Kill” Degouveia (OU) as a perfect Black Swan.

Emily M: Oooh this is beautiful. Again, the all-nude look freaks me out some, but the swan is gorgeous. It reminds me of the recent Oregon State black and white leo in a good way. I’ve never given anything a perfect score before, but here we are.

Elizabeth: This is actually pretty good except for the fact that the swan head is perfectly encircling the right boob. I’m just stealing all of Emily’s team matches and saying Oregon State, too.

Christina: A random giant head on a swimsuit with sparkly hair? This is right up George Washington’s alley. Although adding some eyes would be nice and a lot less creepy.

Emily M: GEORGE WASHINGTON. You know why. No other comment.

Elizabeth: All I can think about is how she doesn’t have any eyes. But yes obviously George Washington.

Christina: To be honest, I quite like these and the originality of it, with each mermaid getting a different color. It does look really nice in the water. The front is lovely, but the tails on the backs probably could have been executed better. I guess I could see LSU with this white and purple.

Emily M: Why, why, WHY is there that white bit at the butt? It’s honestly all I can look at. The commitment to mystique fabric (or the synchro version of it, anyway) is giving me Michigan vibes.

Elizabeth: It’s honestly not bad until you see the little why butt situation going on in the back. For lack of a better guess, I’m going with UCLA.

They were swimming to a version of “Bang Bang (My Baby Shot Me Down)” by Nancy Sinatra.

Christina: I am not a fan of her little white collar necklace happening, but I do like the comic-vibes out of this one. Although the suit literally says “Bang Bang!” And the sparkly cowboy boot! OU, clearly.

Emily M: Oklahoma. Come on, the Sooners were in cowboy boots for their photoshoot! Plus, KJ has taken the leos in a more geometric direction lately, and we know she’ll put words on a look (remember the “OK” leo?).

Elizabeth: If Oklahoma State had a team it would wear this leo. Since it doesn’t, I’ll give it to OU.

The routine was called “A Scream From Lampedusa” and aimed to shed light on the migrant crisis on the coasts of Italy and in the Mediterranean.

Christina: The random mesh in the middle of the stomach bothers me a lot more than the handprints, but it does look better in the water. Everything is so wild and ’90s-like, definitely Utah.

Emily M: This is absolutely a ‘90s Utah leo. The bright colors. The wild pattern. Those are HANDPRINTS. Stop it she has a handprint on her boob someone help me.

Elizabeth: I don’t want to be the one to point out the uncomfortably placed crotch handprint, but here we are. I agree that this is totally a pre-2000s Utah leo, just make it neon pink.

Catalina Ponor probably went into the wrong sport if she wanted to stick to her fashion preferences.