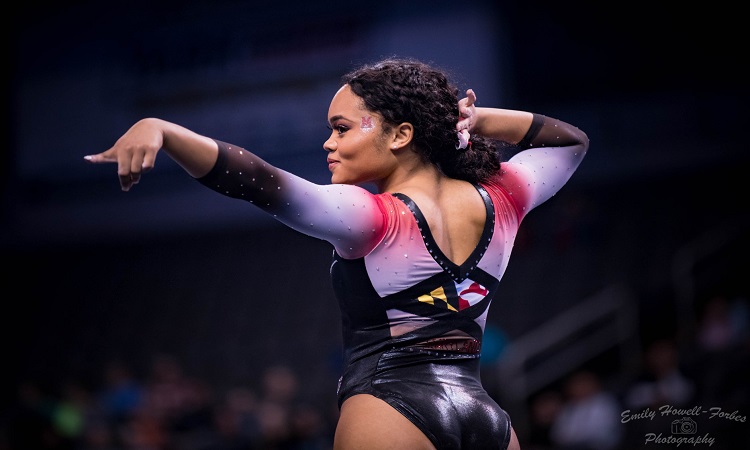 In Birmingham, Alabama, on March 8, 2015, Alabama and Auburn faced off for a dual meet on a podium. The Tide defeated the Tigers 197.200 to 197.025. Alabama would go on to finish the season fourth in the nation and Auburn sixth. In that first Elevate the Stage showdown, senior Kayla Williams competed on vault and beam, tying for the Tide’s highest score on the latter.

Williams, now the Associate Director of Event Partnerships with Knight Eady, the sports management company that hosts the Elevate the Stage series, is excited to bring the competition back to Birmingham for the fifth year.

“There’s an incredible rivalry between Auburn University and the University of Alabama across all sports,” Williams said. Elevate, which has experimented with different host cities and a variety of participating teams, has always included a Birmingham showdown between the in-state rivals. This year’s matchup will take place on Friday, March 13.

“It doesn’t matter what sport is playing; if you get those two schools, get those colors, get those logos next to each other, you’re going to get an incredible turnout because people are so passionate about their university and about their team,” Williams said of why this particular matchup is so electric.

“This event is always awesome, exhilarating and fun for the fans as it brings out the best in both teams,” Alabama head coach Dana Duckworth said. “Alabama versus Auburn is an amazing rivalry, one that goes beyond any one sport, and one that is good for our sport.”

Duckworth and Auburn’s Jeff Graba both pointed out that the combination of the historic rivalry and the podium make for a championship environment in Birmingham. “The Auburn versus Alabama meet is always an anticipated event for our state,” he said. “The history behind this rivalry is unmatched and has set the tone for what it is like to compete in a championship environment.”

While Knight Eady’s offices are located in Birmingham, making the city “home” to the Elevate series, Williams also cited the strength of the youth gymnastics programs in the area, specifically calling out Region 8 in the J.O. program.

In an effort to connect the collegiate competition even more closely with its host site and youth gymnastics, Elevate includes J.O. competitions with its collegiate meet weekends, giving club gymnasts an opportunity to compete on the same podium as the college athletes.

The 2020 competition in Toledo, Ohio—Elevate’s third year in the city—will feature all 10 Big Ten teams and act as a seeding competition for the conference championship in March, as it did in 2019. The collegiate competition will be two sessions, featuring Ohio State, Nebraska, Illinois, Rutgers and Iowa on Friday, February 21, and Minnesota, Michigan, Penn State, Michigan State and Maryland the following day.

The top three finishers from each session will qualify to the evening session of Big Tens, to be hosted by Ohio State on March 21, and the Big Ten will name its regular season champion at the conclusion of the second night of competition in Toledo.

Meredith Paulicivic, head coach at Ohio State, said the Toledo competition itself feels like a championship meet thanks to the podium, energetic crowd and organization of the weekend. Rutgers’ Umme Salim-Beasley added that the neutral site “gives every team the opportunity to shine,” and that hosting in a city without a collegiate team is a chance to showcase the sport. “Hopefully more universities in the state of Ohio would be interested in adding college gymnastics in the future.”

Brett Nelligan of Maryland said having the podium competition—calling it “prestigious”—so early in the season allows his team to prepare for the later postseason meets, something Penn State’s Sarah Shire Brown echoed, noting that every opportunity to compete on podium is beneficial since it’s such a rare opportunity for some teams.

Williams is excited to return to Toledo, pointing out that Region 5, which includes the state of Ohio, “is an absolute wealth in terms of youth gymnastics.” The J.O. competition in Toledo will act as a qualifying competition to the 2020 Nastia Liukin Cup. (The Birmingham date falls after the Nastia cup, which is why that site is not also a qualifier.) The top two level 10 competitors in Toledo will advance to the NLC, which will take place on March 6 at a site yet to be announced.

Historically, the Cup is a strong predictor of future collegiate stars, including Williams herself.

“It’s a really special opportunity because it’s the competition that’s going to give them the most realistic and comparable feeling to actually going to the Nastia Cup,” Williams said, pointing out that the podium and big-stage atmosphere of Elevate is unique, and will give its qualifiers an advantage going into the NLC.

Paulicivic pointed out another advantage to the combined J.O. and collegiate meet, noting that her staff was able to recruit during the weekend last year and adding that it was fun for her gymnasts to sign autographs after the meet.

Both the Birmingham and Toledo competitions promise to be exciting matchups again in 2020 for fans, J.O. athletes and the participating college teams.

To register or purchase tickets for Elevate the Stage, please visit www.elevatethestage.com.