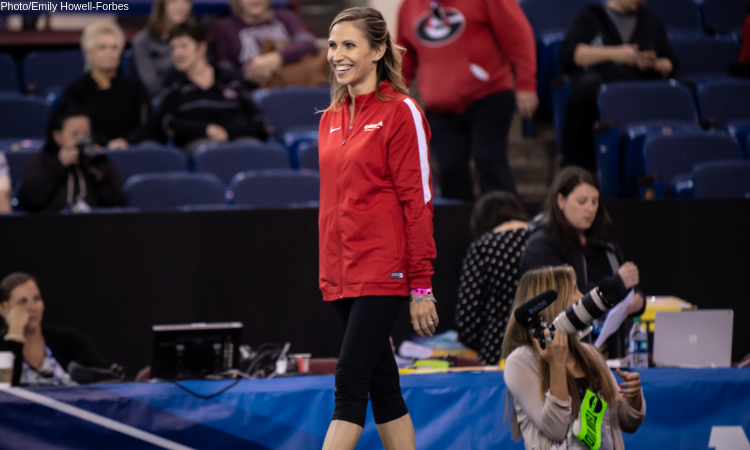 As preseason training was wrapping up and the members of the Georgia gymnastics team prepared to head home for a week of relaxation before the grind of season started, head coach Courtney Kupets Carter and her husband were welcoming their third child. Just a week later, Kupets Carter was back in the gym, ready to lead her team.

When asked if coming back so quickly after giving birth was difficult, Kupets Carter said matter-of-factly that it was not. “I got the whole break to kind of get life sorted with a new baby, have Christmas and really be back in the gym ready to go,” she said.

When Kupets Carter was first hired two years ago, she had little coaching experience. She had coached at the club level and worked as a graduate assistant coach for a year. Many people worried about her inexperience when she was hired and whether or not she would be able to lead a struggling Georgia program back to the top.

Yoculan Leebern had no doubt that she was the right person for the position, despite her inexperience as a coach.

“She’s had the experience as an athlete, not just as an Olympic athlete but competing on a national championship team for four years. That’s huge,” Yoculan Leebern said.

But her first season was not without challenges. Due to several untimely injuries, the Gymdogs were only able to put up five athletes on several events until postseason. Despite the adversity, the team qualified to nationals and finished seventh.

In her second season, nine new freshmen joined the team. Having to acclimate to college gymnastics can be challenging, but Kupets Carter was pleased with how they all handled it. She pushed the freshmen to the same standard as the rest of the athletes on the team, and they delivered. Of their 24 routines in the national semifinal, 11 came from first-years.

Having so much more depth meant a change in how the coaching staff pushed the athletes, too. In the first year, the focus was on giving the gymnasts the confidence that they could hit their routines, but in Kupets Carter’s sophomore season there was much more focus on competing for lineup spots.

“We put together rankings for fall leading up to the first meet of the season, so that really gives them a good understanding of where they’re at within the team,” Kupets Carter said. These rankings gave the gymnasts an idea of where they stood in terms of making lineups. “If you’re not in there and you’re No. 8 in our lineup right now, you need to keep doing your best and pushing those athletes in the lineup so we’re making the team the best we can.”

Despite Kupets Carter’s inexperience with coaching at the NCAA level, she didn’t enter the collegiate gymnastics world blind, making the decision to bring on her longtime mentor and legendary Gymdog head coach Yoculan Leebern to serve as her volunteer assistant for the first two seasons while she got her feet firmly underneath her.

And Yoculan Leebern knows a thing or two about winning championships, as all 10 of Georgia’s national titles were under her leadership. Her role was to help with Kupets Carter’s transition as the head coach, and that role changed throughout the time she was there depending on what was needed.

“The first year I worked full time,” Yoculan Leebern said. “I was present for every single meeting, everything that we did, decisions that were made, composition of routines, workout schedules—pretty much everything in terms of in a team role.” This especially held true after one of the assistant coaches left the program mid-season.

In 2019, Kupets Carter hired Jason Vonk, who had previously coached at Yale and George Washington. His experience at the collegiate level was invaluable and allowed Yoculan Leebern to begin stepping back more and more.

“That helped Courtney a ton, just to have another person with experience to bring their views into the package,” Yoculan Leebern said. She also said another part of it was that Kupets Carter felt much more comfortable in her head coaching role this time around.

During her time as a volunteer assistant coach, Yoculan Leebern mostly helped with floor, but she also served as a mentor for the coaching staff and the team.

“She has that great balance of knowledge, information and love for the sport and Georgia, but also just the ability to have a laugh, to have fun, to enjoy what she’s doing,” Kupets Carter said.

When asked what Yoculan Leebern sees in Kupets Carter as a coach, she had a long list: Kupets Carter is a team player who works well with her other coaches and with the gymnasts. She knows how to adjust to the needs of each individual athlete so the team can be at its best. In addition, the gymnasts highly respect her.

Moving forward, Kupets Carter believes that her team will continue to rise despite Yoculan Leebern now retiring for a second time.

“We’re going to continue to make it to nationals; that’s definitely a big goal,” Kupets Carter said. The team also hopes to make it a step further and qualify for the national finals next year. “We came just shy of it [this year], but wow, we performed to a great level the entire year starting out with a great home opener.”

In addition, she wants the team to continue to push boundaries and be in contention to win another national title.

“Being part of that conversation of the top teams—that’s what Georgia gymnastics is, and that’s what we will continue to do,” she said. 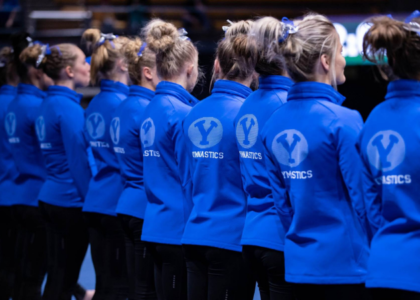