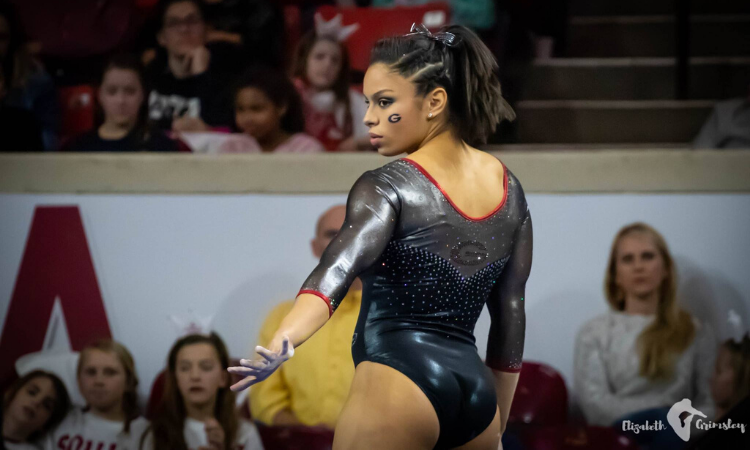 Hello from Stegeman Coliseum, y’all! Tonight we’ll get our “First Look” at the eighth-ranked Georgia GymDogs. The team is coming off a brilliant 2019 season, culminating in a decade-best 198.050 at the Athens Regional and a NCAA National Championships berth. After two years with head coach Courtney Kupets Carter at the helm, Georgia is starting to look like Georgia again. Its goals for 2020 are not only “to start strong and stay strong,” but also “to continue making it to nationals.”

Hopefully, we’ll get the answers to a few questions this evening:

The meet is at Stegeman Coliseum at 6:30 p.m. ET/3:30 p.m. PT. As of press time, this event will not be streamed, but don’t worry! We’ve got you covered and might even have a few videos to share as well.

The format of this preview will be a true intrasquad with a red team and a black team with four to five going up on each event and three scores counting. The top five scores overall for each event will also be added up to come up with a team score.

Worth noting, Austin and Perez-Lugones did not warm up. They may still be recovering from last season’s injuries.

I thought I saw Ugga, but it turned out to be a rolling case of some sort. However, Suzanne IS here and wearing a fabulous black and white sweater that I really want and some seriously comfy-looking ankle boots. Huh, she really is retired…

They just turned off the lights and turned on the smoke machine, which means it’s time! All right, let’s do this…

They’re introducing each gymnast with a clip of their vision for 2020, which I really like. So far, really earnest, insightful answers. I like this a lot better than majors or heights.

The manager’s name is also Suzanne, and I did a double take when they introduced her. Now that would have been a weird flex!

The red team is wearing my absolute favorite leo, the one with a black bodice, sparkly red sleeves, and a red waistband with black Xes around the waist. Black might be a new one

Hawthorne (Red): Nice Y full to start out. Slightly close hip angle, but a fantastic start for her freshman debut.

Ward (Red): Tusk full looked good in the air, but had to pike down. Landed with low chest and a leg up bounce.

Magee (Black): Hung up on her pirouette and came off on the Tkatchev. Josh is timing her rechalk, lol (also, his red suspenders are amazing). A little wonky on bail, but pulled it out. Again, late on the pirouette, but double full dismount was good. Impeccable form as usual throughout.

Dickson (Red): Half on, pike off was basically flawless. Small hop on the landing, but that was excellent.

Vega (Black): HERE SHE GOES! The most perfect kip anyone’s ever kipped. Every handstand is right at 180. Geinger was impeccable, legs together. Legs came apart on Pak (and some elbows on catch), and some form on FTDT, but that was fantastic.

Lukacs (Red): Didn’t get her usual distance, but just a small hop on the landing (similar to Dickson’s). Some form in the air, but overall good.

Roberts (Black): Really nice low bar pirouette to step out. Her form is so great. Double layout looked a little bit piked, but a good landing and overall great routine.

Oakley (Black): Oakley can literally walk under the low bar, haha. Textbook blind change to piked Jaeger. Goes over on a really aggressive handstand and comes off. Comes off again after balking on the Pak, and doesn’t remount. Don’t worry, no injury; it’s an intrasquad, no need to push it.

That vault rotation looked really, really good (with room for an upgrade from Hawthorne). Some jitters on bars, but no major technical issues. The freshmen looked great so far! Also, WHY HASN’T VEGA ALWAYS COMPETED BARS?! That routine is going to put her in the postseason all-around conversation.

Lukacs (Red): Catches Tkatchev a little close, but powers through. Really aggressive swing and positions throughout (which I love). Some leg form on DLO dismount, but good routine.

Hattaway (Red): Pretty pirouette right over the bar. Major form break on Geinger that kills her swing; she tries to muscle through, but comes off on the next handstand. Great handstand positions throughout. Good, hollow DLO that she almost sticks.

Magee (Black): A fabulous Y 1.5 with a crossover step on the landing. Just great!

De Jong (Red): Bonkers high Ray. Comes off during a swing for reasons unclear (I’m going to say nerves). NAILS her DLO. She was the 2018 Pac Rims bars champ, and it shows.

Dickson (Red): Big air on her release. Perfect form throughout. Legit one of the best DLOs I’ve seen; perfect body shape and an emphatic stick. Veteran.

Ward (Red): Almost went over on her first handstand, pulled it through to a gorgeous Ray. Really short handstand. Aaaand the third flawless, stuck DLO. The Dawgs aren’t playing around in 2020!

Black’s vaults were on par with Red’s: They look pretty darn good as is, but with room to upgrade and polish. Again, we saw nervous errors on bars but nothing that makes me worry about their prospects for the season. Was very impressed that everyone finished strong, even after coming off. Even without Schild, I’m much less concerned about the state of Georgia’s bars.

Also, be sure to check out our Twitter feed for video clips (thanks, Elizabeth’s parents and my husband!).

Hawthorne (Red): I don’t know what her beam music is, but I love it. Bummer, comes off on her loso. A little tentative on her leap combo. YES, she did the Hawthorne (front toss from the knees) and it was glorious. Round-off 1.5 dismount with just a little hop.

Roberts (Black): Piked full in to open, just a little low on the chest. Straddles didn’t quite hit 180, but very close. Front lay to front full with some knees, but good landing. Big double pike to close. She’s really happy with that (and she should be).

Lukacs (Red): Solid front toss. Bhs to loso with some form but no movement. Back tuck to straddle quarter was excellent. Seriously, not a waver from her. Big double tuck to finish; chest was really low and she had to take a step forward. Glad to see her in this lineup!

De Jong (Red): Fantastic jump series, great amplitude and form. Front aerial, nice. Bhs los, rock solid. Bend at the waist after straddle half, but she held on. Aerial full to finish. She had a HUGE grin the whole time, and I love it!

Vega (Black): FTDT to open; I thought she got a little hung up, but the landing was perfect. Front 1.5 to lay to sissone, excellent. Switch split full, fantastic. Big double pike to close. Really fun routine, and she performs the hell out of it. 9.95 may be a little generous, but it was an excellent routine.

Hawthorne’s fall was the only major mistake from the beam lineup. Very few superfluous checks or wobbles. Really, really digging the floor routines so far. The music and choreography all worked really well together, and the gymnasts are performing it really well without sacrificing technique on their acro and dance elements.

Magee (Black): She’s so calm and poised… Lovely bhs bhs to floaty loso. She’s finishing every skill and dance move with her fingers, which I really appreciate. Round-off 1.5 with a small hop to the side.

De Jong (Red): Great double pike to open. Perfect Popa (I usually hate those). Skids out of her 1.5 to front lay, but somehow holds on and stays in bounds. Double tuck to finish, lands a little deep. Love the low choreo highlighting her flexibility. Great job!

Oakley (Black): Pretty wolf turn (yes, really) to straddle. Gainer bhs to bhs loso, and ooh she comes off. Good split jump to ring. Excellent side aerial. Cartwheel to side gainer full dismount. A lot to like about this routine. Also, props for Billy Joel as her beam music.

Hawthorne (Red): Stupidly high double pike to open. Gets a little hung up on her switch full, but not bad. Front lay to Rudi to slightly-chaotic split. Yes, a Shushunova! Big double tuck to close. Awesome routine.

Baumann (Black): Side aerial to loso, as good as I’ve ever seen her do it. Regular full turn this time, but she kicks out the leg to finish. Nice splits. Round-off 1.5 dismount is a little short, and she takes a step. Very, very nice routine from her.

Lukacs (Red): This music is perfect for her, very gritty and bas-heavy. That big double lay to open with arms flared. Front full to front half to Shushanova, I’m in love! Wolf full, nice. Nailed the double pike to finish. That was fabulous. I liked it at least as much as Vega’s.

Dickson (Red): Arabian double tuck to open, a little short and steps back. Rudi to deep layout, but she saves it. It’s the theme from Friends and everyone’s clapping along, love it. High double pike to finish.

Color me impressed. There wasn’t one floor routine I hated. Beam has some obvious jitters to work out, but — again — they look more like nerves than fundamental technique issues. All in all, I’m very optimistic about the Gym Dawgs’ 2020 season.