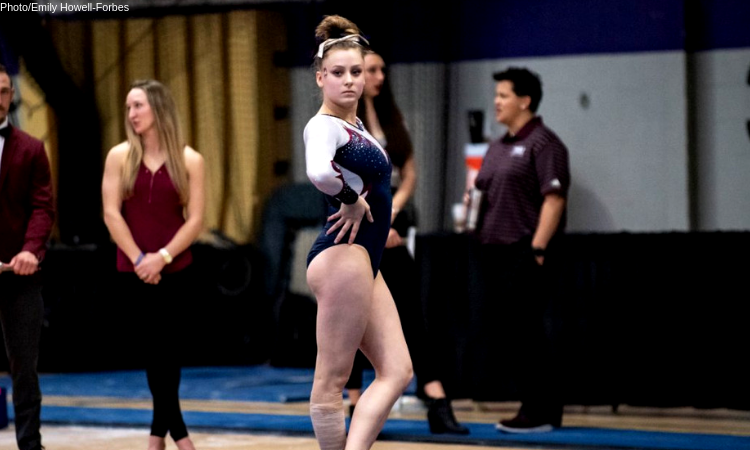 When the news came that UIC’s gymnastics program would be cut from the school’s athletic department, then-freshman Alisa Sheremeta and her teammates decided not to think about the future—not yet.

From that moment, it was business as usual.

“We went on as though we would be reinstated,” Sheremeta said. “Once competition season started we began realizing it might be our last chance to compete; that’s when I started thinking about the future.”

That future has since been determined; she is transferring to Missouri to continue her career, which started out strong at UIC. She was the MIC Newcomer of the Week four times and earned three floor titles after competing the event in all but one meet. That stellar run culminated in a four-way tie for second place on the event at USAG nationals.

“She has an amazing style of gymnastics,” UIC co-head coach Peter Jansson said. “[Alisa] is a great competitor, and she has a style the judges love.”

However, Sheremeta’s success during her freshman year couldn’t deter the difficulties of the transferring process. Few schools had spots open let alone scholarships available. Most of the UIC gymnasts didn’t even begin looking into other options until the competition season was over.

Jansson elaborated on the transfer process and how he and co-head coach Mary Jansson handled it with their athletes. Every eligible gymnast was automatically put into the NCAA transfer portal whether or not they wanted to transfer, and they could then decide whether or not they wished to be contacted by other schools. That process began once the season was over.

“We met with every athlete and talked about it,” he said. “[As a team we] decided we wouldn’t even discuss transferring unless it was privately with a coach. No one talked about where they would end up next otherwise.”

Because of the uncertainty surrounding these factors, Sheremeta wasn’t sure she would have the chance to compete in college beyond 2019.

Enter Missouri. Head coach Shannon Welker reported being instantly impressed by Sheremeta’s gymnastics. “I really like her style,” he said. “Her success during her freshman year was pretty impressive, especially with the amount she competed. She was very consistent across her two main events.”

On the surface, the programs at UIC and Missouri might appear very different. Missouri is part of the high-exposure SEC while UIC and other teams in the MIC often receive less attention. SEC schools also tend to have more students and bigger budgets for their athletic programs. But what many don’t know is that Welker himself competed for the UIC men’s program.

He noted how disappointing it was to see the decision made to cut the teams, especially as an alumnus, but how he also saw it as an opportunity to step in.

The word home resonated with Sheremeta when discussing the program at Missouri.

“When I came to visit, I really liked the campus—they have great academic opportunities,” she said. “I also got to spend time with the team, and I can tell they’re also close and supportive [like at UIC].”

She also expressed a sort of kinship with Welker, knowing they both are Flames. “Though I only spent one year at UIC, we can relate with our experiences since we went through the same place,” she said. “We came from the same place in a way.”

Welker expects Sheremeta to be a key contributor on her standout events of beam and floor, where she’ll be adding depth to a floor squad that ranked 16th in the country in 2019.

“It meant a lot to me to be in a position where we could help a fellow UIC Flame while helping our own program as well.”