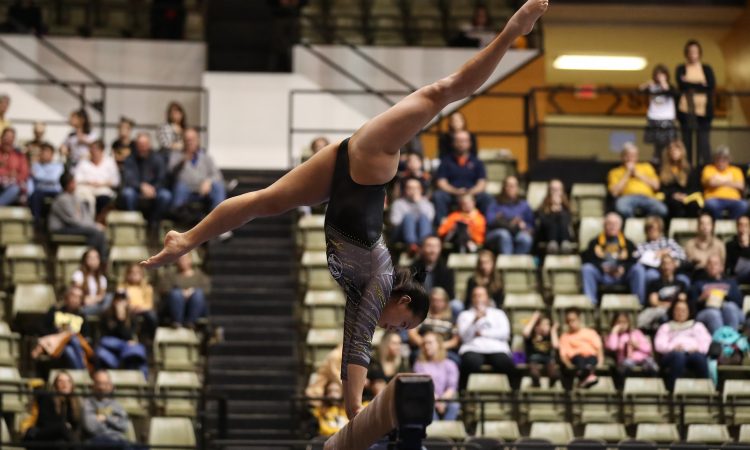 The No. 2 team in the country comes to Columbia tonight as Florida takes on Missouri. Florida is coming off its highest season-opening score in program history, and the team looks to be one of the deepest in the NCAA. Trinity Thomas had a big all around performance that came just shy of her personal record.

We projected that Missouri would have depth of its own coming into 2020, but only eight Tigers competed last week. All arounder Aspen Tucker is expected to return tonight, but it’s a breakout performance from freshman Helen Hu that would really carry the team and secure a hopeful outlook going forward. She went 9.950 on beam last week, so something big could be in store for her tonight.

On a personal note, this is my first live blog I’m doing since getting back to school, so I have the luxury of double screens in a computer lab tonight. It’s the little things. Follow along with the official stream (it’s the marquee meet on SEC) and stats.

Lineups are in for Mizzou!

Hu restricted to bars and beam.

Sounds like the arena is playing “Dance Monkey” so that’s promising.

Schreiber (Missouri): Yfull, looks good in the air but lands with chest down and a hop. 9.600.

Gottula (Missouri): Yfull, great landing with the tiniest of shuffles back. Looks like a stick from some angles. 9.750.

Gowey (Florida): Really big Tkatchev, pretty Pak. Hits all her handstands. DLO, lands in a squat position and has to do windmill arms to stay on her feet. And she still does. 9.775.

Tucker (Missouri): Back from illness tonight. Another yfull, lands off to the side a bit but a good one with just small shuffle. 9.700 seems a little low.

Hundley (Florida): Maloney is just so nice. Legs apart on the Pak but just a tad. Shap half pretty, Full-in with a hop to the side. 9.775.

Porter (Missouri): “Coach said you don’t have an option, you’re going for the 1.5.” Sounds healthy. Well, she does go for it, good height in the air but legs get crazy as she goes for the landing and lands kind of crunched. Good effort and good to finally see her 10.0 start. 9.700.

Brandt (Missouri): Front HS pike half with a hop back and chest slightly down. 9.800.

Skaggs (Florida): Tkatchev to Pak, Pak is apart. DLO seems a little close to the bar, legs apart and a stick. 9.875.

Thomas (Florida): All the air on her Maloney, woof Pak looked a little close. Seemed to go too hard on her handstand out of the shap, loses her rhythm and she has to come off. Unusual, of course. Very nice DLO to end with a small hop. 9.075.

Seems like some…dare I say…conservative scoring this evening, particularly on Missouri’s vaults. Florida looks confident on bars, but there’s details to clean up. And so, the Trinity 10.0 watch continues into the next week.

Skaggs (Florida): New addition to the lineup. Pretty yfull with a little hop. 9.800.

Christensen (Missouri): Tkatchev not the biggest but gets it around, really pretty full pirouette and another stuck double back. Can you say they’re “on a roll” after 2 routines though…? 9.800.

Alexander (Florida): Yfull, super powerful and flared out with another small hop. She’s the tallest Florida gymnast since 2007, am I the only one who didn’t know that…? 9.775.

Schreiber (Missouri): Missed the beginning but a small hop on DLO dismount. 9.700.

Hu (Missouri): Okay queen that LIPSTICK. Piked Jaeger to Pak, best Pak so far too! Maloney really nice. Double back stuck. Things she did: that. 9.950.

Really enjoyed Missouri’s bars lineup; not the flashiest but consistent. Florida wasn’t its usual self on vault, but it seemed like an off week and not indicative of greater issues.

I can’t with Jenny and the team having to discuss what happened with regionals beam…classy responses but the DRAMA.

Schreiber (Missouri): BHS LOSO, no hesitation. Switch half to split to beat jump, slightly short on the leaps but again, very solid. Wow, this is not the best angle if Missouri wanted to hide how few people came to the meet…pretty dismount. 9.800.

Johnson-Scharpf (Florida): Big double pike, small step back. 1.5 to front lay to stag, nice little detail. Cool leap combo. We hear the commentators are “moving over here” to the music, I’ll just take their word for it. Double back chest slightly down. 9.775.

Gowey (Florida): Wait I love this music. Sounds like it would be in a luxury car commercial. Punch front to Rudi, super pretty. Popa to wolf jump full. Double back chest slightly down. That’s gonna be a new fave of mine. 9.900.

Sheremeta (Missouri): BHS LOSO a little off, leg goes up but she keeps it on. Front aerial to split jump not totally 180. Missed the dismount because I heard we’re getting a fluff piece on her journey from UIC later! 9.750.

Hundley (Florida): Double tuck, her usual. Double the same. Ozzy Osbourne/ACDC routine…and now the unique “We Will Rock You” to end. Back 1.5 to front lay, very energetic, not my choice of music but a nice routine for her. 9.850.

Porter (Missouri): Front aerial, hesitation, that was a good save. Front aerial to back tuck, hesitates but much more confident on the back tuck. Might be an SV issue but she seemed to try and regroup…? 9.275…guess the SV was an issue after all.

Reed (Florida): TEMPO BY LIZZO OMG. YASSS! And yes I’m just as excited for the DLO, that was fab too. Rudi. Last half is more of a drumline feel, good double pike to end. Should be a big one. 9.850.

Gottula (Missouri): Triple series with some hesitation. Switch to 3/4 jump, it’s not fully extended and she hesitates but stays on. Gainer full. 9.650.

Thomas (Florida): Nice, open DLO…yeah…missed middle pass but looked like a good reaction. Is that the WORM in her choreo…? Here for it. Double pike controlled lunge. 9.950.

Hu (Missouri): Khalid beam music, the taste jumped out. BHS LOSO hesitates. Leaps fully extended. “Did you see that full turn…?” I mean yeah, I was watching it with you. Aerial to beat jump scale beautiful as ever. Gainer full stick. 9.900.

Baumann (Florida): Double tuck. Alright I’ll give them that “Floor-ida” joke because that’s gone through my head many, many times. Back 1.5 to front full. “Rowland” to “Rowling” though, the ship sailed. Can y’all stop distracting me from this routine with your horrid puns? Good double pike to end. 9.925.

Missouri definitely still has some beam jitters to work out but a solid go overall. Florida looks really nice on floor, and it feels like they’ve got even more where that came from.

Wonder if SEC Network used this feature on our site for inspiration for this fluff piece? I heard the writer’s pretty iconic. Would’ve liked to hear from Sheremeta herself here…but the old UIC footage was a nice TBT.

Sheremeta (Missouri): Front double full! Who else had this music? Front 1.5 to LOSO, really nice choreo, assuming she’s supposed to be a Bond girl or something? Back 1.5 to front aerial dismount, phenom. 9.800.

Schreiber (Missouri): Missed first pass. Front rudi to LOSO, love that. They called her Kambrie and I got confused. 9.800. She’ll win the AA with that.

Clapper (Florida): My commentary for this deleted itself, but takeaways: major check on BHS LOSO but stays on. Rest was better. 9.500.

Brandt (Missouri): Double pike. FHS front full, doesn’t get it around and sits it down. Double tuck and that’s short too, tries to stay up but puts her hands down. Hoping it’s a fluke because she’s been really promising thus far. 8.050.

Brandt is sitting down, seems a little gassed from the fall but hopefully it’s nothing worse. She’s up!!! Yay.

McCrary (Missouri): Front lay to back 1.5. STUCK double pike. Back 2.5 to finish, seems super excited about it too. That was actually so pretty. 9.800.

Gowey (Florida): Triple series really nice, no hesitation. Slightly more on front aerial to sissone. Good gainer full to dismount. 9.900 will tie with Hu for the title if Trinity doesn’t outscore. That’ll be a Florida W, too.

Porter (Missouri): Double pike chest down but a stick. This music, we’re really in the club rn. Back 1.5 to front lay. Great leaps, I like this routine. LMAO they have a tiger plush toy for the Lion King music. Ends with great double tuck. 9.850.

Thomas (Florida): BHS LOSO, perfect. BHS swingdown. Looking much more like her usual self to end. Sorry Gowey and Hu, this one will top y’all. 9.925, yup.

An overall decent performance from Missouri…scoring was pretty fair here tonight. Florida sees a dip from last night, but they really started to pick it up as they went along. That Gators floor lineup is fire emojis.

Kudos especially to Missouri freshman Sienna Schreiber for an AA win. I saw her from the start as that rock-solid, silent-but-deadly AA icon, and she’s shaping up to be filling that role.

Thanks for joining, y’all!