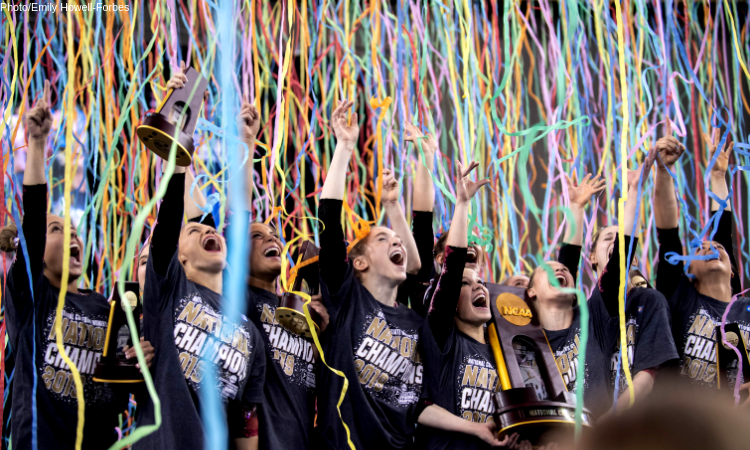 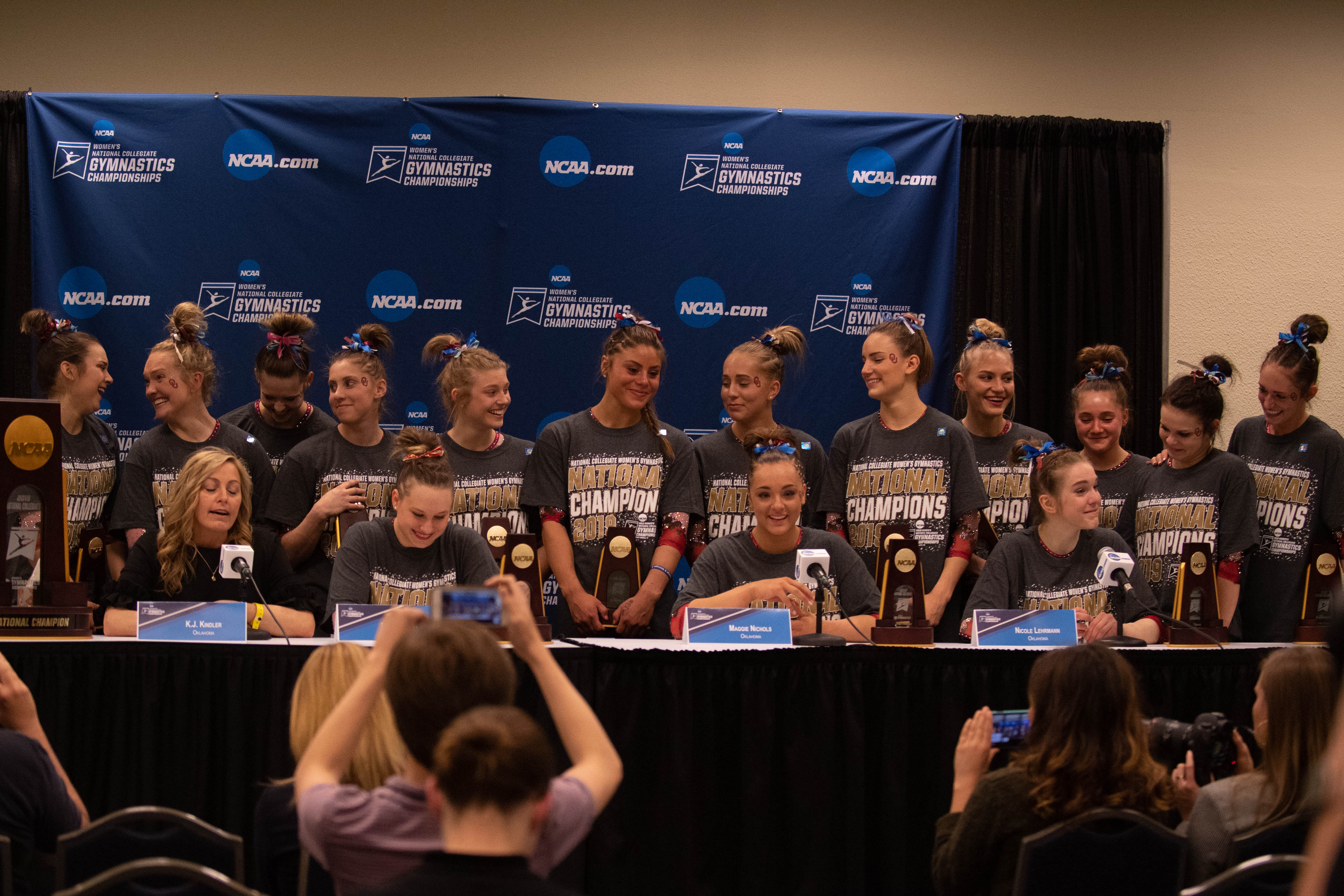 Shortly after Oklahoma won its fourth NCAA title in women’s gymnastics, head coach K.J. Kindler and three athletes walked into the media room to take the seats marked with their names at the dais.

Then the other 13 Sooners filed in behind them.

To the mild chagrin of the press conference moderator, who instructed members of the media that they could only address questions to those seated, Kindler had refused to choose only three to attend.

“They asked me who should come in here, and I said everybody,” she said. “And the reason I said that is because it has been quite a journey this year, and there’s not one person who was not working their butt off contributing in every single way.”

That included junior Maggie Nichols, who competed floor this weekend for the first time since January 11 after a teammate’s foot injury left a hole in the event’s lineup. Nichols had been training floor for less than two weeks and landed her more difficult tumbling pass, a double pike, on a hard surface for the very first time in training in Fort Worth just three days ago.

Senior Brenna Dowell had a victorious moment of her own. In her very last routine as a Sooner she stuck a Yurchenko one and a half spectacularly, coming the closest of any athlete at the championships to a perfect 10.0.

“That was the first vault that I really stuck all season, and to do it the very last night—to clinch that victory—was so exciting,” she said. “I looked into Lou [Ball]’s face and saw that he was excited and then looked at K.J. and she was already crying.”

The Sooners were particularly thrilled to be back on top after a narrow loss last year to UCLA, which they freely admitted stung at the time. The team’s motto for the first part of the season, “#pztsf,” stood for “point zero three seven five,” the margin of loss to UCLA in 2018.

“It definitely hurt coming up a little bit short last year,” Nichols said. “We had our hashtag about how much how much we lost by. We had that reminder on our tank tops and bracelets, and we said it all the time so we were always motivated in the gym to be so much better with little details so we could win by a big margin this year.”

Oklahoma led the field throughout Saturday’s final and walked away with the top event total on all four events. The win capped an undefeated season for the Sooners, but one that Kindler was quick to point out had involved more than its share of adversity.

“We were battling the entire time, and every week was a gigantic challenge,” she said. “We’re just very good at hiding it.”

That adversity included the normal sports ups and downs of injuries and bad training days but also the devastating loss of Dave Richardson, a local police officer and the husband of athletic trainer Jenn Richardson, whom the team referred to as their “Norman dad,” in February. Jenn Richardson chose to return to work within days of her husband’s death, and “Do It for Dave” has become the team’s rallying cry in the second half of the season.

Kindler explained that for every meet in 2019, the coaches chose a song to represent how the team would approach the competition that week. In Friday’s semifinal, the selection was “24k Magic” by Bruno Mars.

“We picked that song, and I noticed Jenn started bawling in the back of the room,” Kindler said. “After everyone left, she said that was Dave’s song. And we had no idea when we picked it.”

It wasn’t the only time in the championship weekend when Kindler’s song choice was prescient. Saturday’s song was “The Champion” by Carrie Underwood, which happened to play in the arena just following the announcement of the Sooners as national champions.

“It’s unbelievable,” she said. “We have had little coincidences or blessings or whatever you want to call them every week all season. I just can’t put it into words. It’s the culmination of what our season was, and tonight [Dave] was absolutely lifting us up.”