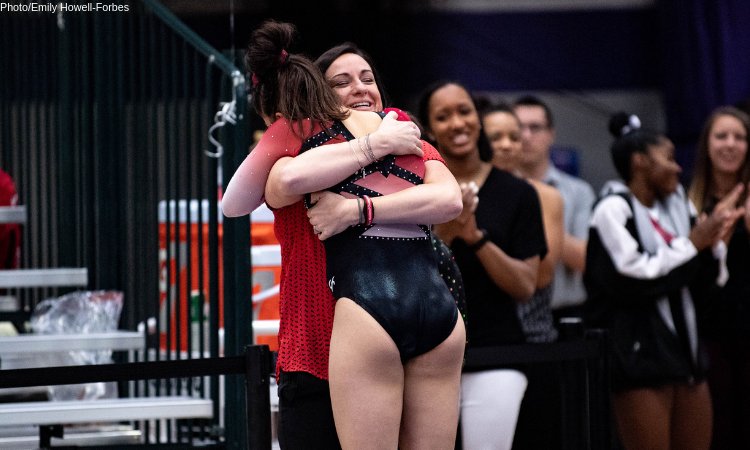 Nine months ago, the Southeast Missouri State gymnastics team was in turmoil. It didn’t have a permanent head coach, the roster was down nine gymnasts—including the two graduating seniors—and rumors of the program potentially being cut circulated social media.

But the first signs of things beginning to look up came in mid-August. Alumna Ashley Lawson (née Godwin) was named head coach of the Redhawks, giving stability to the once-great program and succinctly squashing any remaining disbanding rumors.

The situation created perhaps the most uncertainty for the freshmen, who were recruited by one coach, signed National Letters of Intent for another and eventually arrived on campus to be led by a third. One newcomer put in this position was Anna Kaziska, a Louisville, Kentucky, native, who became an immediate star for the Redhawks.

“This year was more of a learning experience,” Kaziska said. “As time went on, I realized the more I could go out and have fun, I’d do better.”

Kaziska’s standout year culminated with a trip to the NCAA regional championship in Baton Rouge, Louisiana, as well as three top-five individual results—finishing second on both beam and floor—at the USAG National Championships in Bridgeport, Connecticut.

However, these outstanding accomplishments cap off a year that was anything but. Sure, the team had a solid footing in terms of leadership, but that’s really where the luck stopped.

“It was definitely a trying season—not one that I think any coach could ever envision,” Lawson said. “But the girls persevered through it all.”

Some of the hardship came in the form of injuries. In the heart of the season, SEMO only had eight—and only eight—healthy bodies able to compete while having to put up at leave five on each of the four events for a full team score. Most teams are able to play with 12-plus. Lawson even had to convince one athlete to come out of retirement to field a full slate of lineups.

“This year they really experienced the lowest of valleys, and we kept talking about having a mountain that we had to climb,” Lawson said. “When it was really easy to throw the towel in, they kept going and did everything we could ask of them.”

Holding the team together through such turmoil isn’t a task just any first-year head coach could have managed. But Lawson had unknowingly spent the years leading up to 2019 preparing. She spent a year as an assistant coach at Lindenwood, helping the young program to some of its biggest successes.

“It’s been a very humbling experience going from Lindenwood to SEMO, but definitely not one that I regret,” Lawson said. “I’m grateful for the opportunity to be back at my alma mater.”

It’s really the lessons she learned at Lindenwood that helped her lead SEMO in this transition year, keeping the team’s spirit high despite all the reasons to give up. The biggest of those was the importance of creating a culture that every gymnast wants to buy into.

“[Lindenwood has] a fantastic culture. The team has really bought into everything and truly believes in what they’re doing,” Lawson said. “We really pushed buying into the team culture and that we’re here for a reason and can do great things. If they trust each other and believe in each other, they can do that too.”

It might have taken them a while, but the Redhawks are finally getting there, rounding our their 2019 season by eclipsing 190 for the first time all year at the conference championship. They’re hoping that things will continue to go up from there.

“They were all really inspired by that,” Lawson said. “Now they’re hungry and want to come back and be one of those teams that everyone talks about how much [it has] jumped in the rankings.”