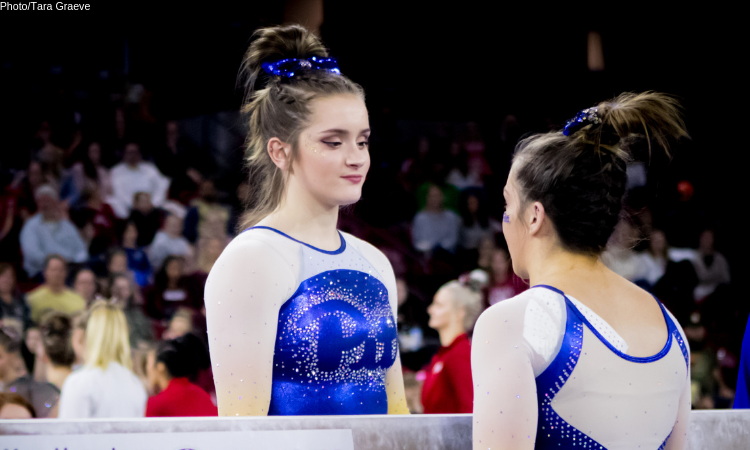 With four EAGL teams here (we’re just missing the two North Carolina teams), today will be a sneak preview of how these teams stack up. Plus, Maryland will be here as well and should be contending for the top spot.

For New Hampshire and George Washington, this will be a huge opportunity to help secure their spots at regionals. New Hampshire is currently counting a high 194 road score towards its NQS, and this will be its last opportunity to drop it as the Wildcats will be at home next week. George Washington is sitting at No. 36, the last regionals spot, and is in danger of being passed by some lower ranked teams. It will want to record a good score here to stay in contention.

Apparently they are doing alumni recognition right now, so I don’t think we’re going to start on time.

Live scoring is not available, so I’ll update you on scores whenever I can.

My livestream is now gone, so hopefully it will be back before the first vault.

It was back for 10 seconds and went out again. So this is going to be fun..

Bochenek with her usual routine. Some form stuff, but she hits EVERY. TIME.

Jenkins (Pitt) – missed beginning, but DLO with a step to close. Season debut! 9.825

Let’s see if I can get some standings…

Peterman? (UMD) – little low on rudi, and that’s all we got

Farina? (UMD) – double pike and steps OOB, double back with a little shuffle

Brett (Pitt) – off on beam, and another fall on illusion turn, sticks dismount

Mulligan (UNH) – little form break but does a nice jaeger right after, huge full in dismount with a step

Gamble (TU) – y half, little squatty with a hop forward

? (UMD) – great double back to open, cool double turn! 1.5 to front lay with a little shuffle on the landing

Herbine (Pitt) – falls on double back but gets tons of height, beautiful splits, sits front lay to front full. Yikes.

Bochenek (Pitt) – just catching the end, good 1.5 to front full to end, large step to the side though

Brechwald (Pitt) – floor debut, let’s go! sticks double pike to open, good double tuck, such a fun routine! Just gets 1.5 to front lay around but saves it. SO GLAD SHE’S BACK!

Burgess (UMD) – good y full with a small hop back

Ranti (TU) – good cartwheel to side aerial series a little hesitation but I think they’ll give it to her, good on leap series, slight wobble on straddle jump, stuck dismount

New Hampshire finished with a 194.875. Not enough to improve NQS.

Ceccarini (Pitt) – good y full with a step back

Zona? (GW) – wobble on acro series but saves it, good switch side, small hop on dismount

Arduino (TU) – huge double pike to open, front lay to front half to stag is good, great 1.5 to front lay to close. Great redemption after beam!

? (GW) – off on acro series, good switch side, step on dismount