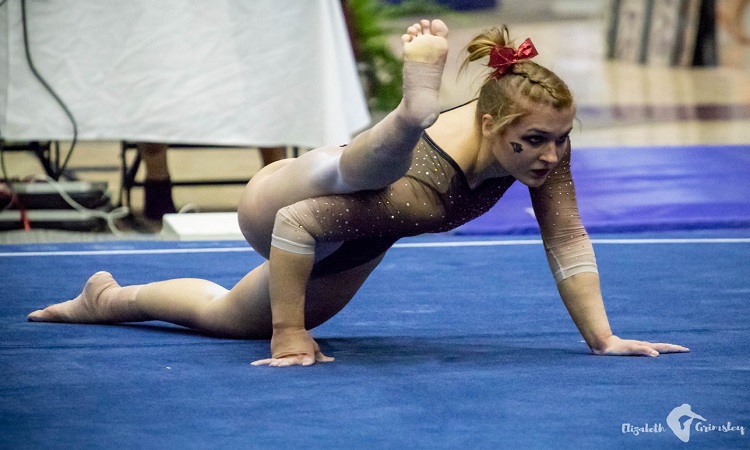 You know the big names, like Maggie Nichols and MyKayla Skinner, and even those like Rachel Stypinski or Kendall Valentin. But every team has that gymnast who is just as critical to the squad’s success yet doesn’t get the attention she deserves. We’ve chosen to highlight some of the 2018 unsung heroes who stood out to us. These gymnasts might keep their wits about them when the rest of a lineup falters, or put up the team’s best RQS on its weakest event. Regardless, they are important pieces of their respective teams’ puzzles and are often the reason a team stays afloat when the stars stumble.

Illinois’ breakout star of the year was Rae Balthazor, but sophomore Karen Howell was an important three event rock for the Illini. With highs of 9.900 or better on bars, beam and floor, and RQSs solidly in the mid-9.8s, Howell was a crucial piece of Illinois’ 2018 campaign. With a gorgeous toe point and exquisite dance, her Coldplay medley floor routine was can’t-miss gymnastics, and we can’t wait to see what she brings in 2019.

UCLA has a host of big name gymnasts to shuffle through lineups, but sophomore Anna Glenn, just coming off of labrum surgery last year, ended up being very important in the Bruins’ title quest as well. She competed vault most of the year—the Bruins’ least consistent apparatus—and had no misses, never scoring below a 9.750. She stepped into the bars lineup occasionally as well, winning a spot for the postseason and scoring a 9.850 in the Super Six. Glenn also made one appearance on beam, her twin sister’s specialty, for a 9.900. She will undoubtedly continue to grow in 2019 and will likely be a staple in UCLA lineups in the years to come.

Junior Allison Bower competed beam and floor regularly for Missouri, finishing 2018 with a 9.840 RQS on the latter. Though she was an important part of those lineups, it was her ability to step into vault or bars when needed that makes her stand out. She competed both three times, not scoring below a 9.700. Bower competed in the all around for the first time in her career in the middle of the season for a solid 39.300 against LSU; enough to finish third behind the likes of Myia Hambrick and Sarah Finnegan. A versatile gymnast like Bower, who can step in anywhere at any time, is a great asset to any team. She will undoubtedly make her mark in 2019 as well.

Michigan is always a team full of names you know, but in a 2018 season that was interrupted by Olivia Karas’ Achilles injury, it was a potentially unknown name that kept steadily putting up those all-important mid-lineup routines that make or break a team’s success. Lexi Funk regularly competed in the all around and put up huge RQSs on beam and floor. Though a little lower, her vault and bars scores were just as critical to the Wolverines. Funk only had two scores below 9.500 all year and will undoubtedly be a critical piece of the puzzle in her junior campaign while Michigan looks to get back to nationals.

Cal had a strong 2018 on the heels of Toni-Ann Williams’ return and a gaggle of exciting freshmen. Senior Alicia Gallarzo, though, quietly put up important scores all year on her two—sometimes three—events. She spent time in the vault, beam and floor lineups, excelling especially on beam where she finished the year with a 9.865 RQS. Gallarzo stepped into the floor lineup at the end of the season, scoring as high as 9.875 and never below a 9.650 after only having competed the event once during her freshman season for a 9.600. Gallarzo improved her scores throughout her collegiate career and made more lineups than ever in 2018. She became a crucial part of the Bears’ success and will leave behind a hole in 2019.

Minnesota’s big 2018 was led by breakout performances from new stars and some seniors having spectacular swan song years. Paige Williams, though, had an exceptional year of her own. The sophomore competed floor regularly and closed out the season with a career high 9.950 at the Minneapolis regional. She finished the year with a 9.870 RQS, and her occasional vaults for scores right around 9.800 didn’t hurt either. Williams was battling injury but didn’t miss a beat. The Gophers will be looking forward to seeing what she can do when healthy in 2019.

In 2018 Iowa was led by some big personalities and dynamic performers, but it was senior Nikki Youd who quietly led the team in RQS on beam and vault. Youd competed vault, beam and floor all year and had only two misses across all three. Her gorgeous Yurchenko half was a highlight of the vault rotation, and her beam and floor consistency were incredibly important after Clair Kaji’s season-ending injury.

The George Washington senior class was hugely important to its 2018 season, led by gymnasts who garnered national attention. Sara Mermelstein didn’t get as much glory, but she was another very important member of that megaclass. She competed vault, beam and floor throughout all of 2018, with only one miss, and had RQSs all hovering around the 9.800 mark. She was also incredibly consistent, not putting up the biggest scores but always an incredibly reliable member of all three lineups.

The Nittany Lions struggled mightily with beam consistency in 2018 from start to finish. Event specialist Mason Hosek, though, kept it together. She often anchored the rotation, competed beam every week and had only one miss all season. With a high of 9.900 and a 9.825 RQS, Hosek held the lineup together even when everything else went wrong. When she mounted the beam as anchor, she was often all that stood between the Nittany Lions and counting two falls. It’s good news for Penn State that she’ll be back in 2019.

Every team needs a reliable three eventer, and for Boise State that gymnast is Ann Stockwell. She competed vault, bars and floor in every meet, with only two misses all season. She finished her senior season with the team’s highest vault RQS, a 9.870, and 9.840 and 9.865 on bars and floor, respectively. Stockwell took the MRGC vault title with a 9.900, helping the Broncos secure the team win as well. To have a successful 2019, Boise State will need to find someone to step into her shoes.

The Tar Heels were extremely lopsided in 2018, excelling on vault and floor but struggling on bars and beam. Kaitlynn Hedelund led the team on bars, securing a 9.790 RQS after only one miss all year. The senior competed the event in every meet and missed the beam lineup only once. On the latter, she put up steady, consistent scores that the Tar Heels needed. Hedelund kept North Carolina’s weaknesses from becoming truly devastating and will undoubtedly be missed greatly in 2019.

In 2017, Kentucky was led by four all arounders. With more depth in 2018, the Wildcats had more room to play with lineups. Junior Katie Stuart, who had been one of those all arounders in her sophomore campaign, became a critical piece of the puzzle in a new way last year. She competed all four throughout the season, always competing two or three events in a single meet. Having a gymnast like Stuart, who could step in at any time on any event and who competed beam all year for a 9.825 RQS, gave Kentucky stability even when lineups were shifting. Versatile and reliable, Stuart will no doubt play an important role during her senior season.

Jessica Yamzon is the quintessential reliable all arounder of which every team dreams. The sophomore finished 2018 with a 39.255 RQS after competing on all four in every meet with only one miss all year. Yamzon never scored below 9.800 on beam and went as high as 9.950. Her steady, clean work was a big factor in getting the Razorbacks back to nationals. Yamzon competed all four in every meet of the 2017 season as a freshman, too, so keep an eye on her in 2019.

San Jose State had a rough 2018 largely due to inconsistency. Ellie Pascoe-Long, though, had no misses all year on vault or floor and put up a handful of strong bars scores as well. She finished with solid 9.800+ RQSs on her best two and led the Spartans on vault. Pascoe-Long qualified to regionals as an individual on vault and floor and will be an important part of the Spartans’ 2019 campaign.

New Hampshire is a team known for it’s beam work and rightly so; the Wildcats finished 2018 ranked No. 17 on the event. The other three pieces, though, were inconsistent and kept the them from having a true breakout year. Lauren Diggan spent all season competing those three events, and the freshman had only four misses all year—all early in the season. She finished the year with a 9.870 bars RQS with vault and floor not far behind. It is gymnasts like Diggan, with strengths other than beam, that will help New Hampshire continue to climb in 2019.

Yale’s 2018 season was its best in years, largely thanks to strong all around work from Jacey Baldovino. The freshman finished the year with a 39.080 all around RQS, and a big 9.845 on beam; her other three events were not far behind. Baldovino tied for second on bars with a 9.850 at USAG nationals. With strength and consistency across all four, she is exactly the type of athlete Yale needs to continue climbing the ranks; the Bulldogs will be happy to have her for the next three years.

Texas Woman’s dominated the end of the Division II season, putting up a huge 196.525 to win USAG nationals, a total many DI teams dream of hitting. The Pioneers were led by a few heavy hitters, but senior Alyssa Kelly was also a critical piece. The bars and beam specialist wasn’t always the biggest score, but her two 9.800+ RQS totals and consistency made her routines critical. All that work paid off when Kelly tied teammate Schyler Jones to take the USAG beam title with a 9.825.

Division II powerhouse Lindenwood was led in 2018 by stars who found recognition even among their DI counterparts. Just as important to the squad that finished No. 2 at USAG nationals, though, was Andy Alexander. The junior was a constant on beam and floor, and only missed the bars lineup in the season opener. With high scores on all three in the 9.800s, she was an important contributor across the board. Alexander shone on floor, though, where her team-best 9.825 RQS secured the Lions’ weakest event. Alexander finished fourth at USAG event finals with a 9.875 on the apparatus and will surely be a staple again in 2019.

Eastern Michigan did not have the 2018 it was hoping for after a drawn out head coach fiasco and losing Catie Conrad to Pittsburgh. A core of vital gymnasts kept the Eagles afloat, and perhaps the most important was sophomore Emili Dobronics. She competed in the all around in nearly every meet with only two misses, leading the team on floor with an RQS of 9.835. Dobronics qualified to the Columbus regional in the all around where she notched a 9.800 on floor, finishing ahead of names like Nia Dennis and tying Pauline Tratz. Dobronics is a key part of EMU’s rebuilding efforts and will be a name to watch in 2019.

Who did we miss? Let us know!

READ THIS NEXT: 13 Under-the-Radar J.O. Freshmen