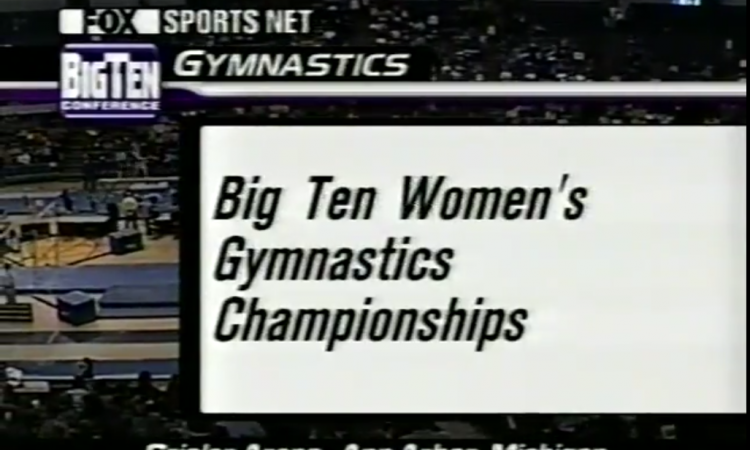 Welcome to our first Throwback Thursday Live(ish) Blog of the offseason. We’ll be going back to some old meets to bring you all of the action. Like our in-season live blogs, we’ll include some coverage of what is going on, but to make it more fun, there will also be gifs and screencaps so you don’t need to watch the YouTube video if you don’t want to.

The year is 2001. We as gymnastics fans have (sort of) moved along from the chaos of the 2000 Sydney games (but really will we ever be over it?). The vault is still a horse. Elise Ray is a freshman at Michigan. Maryland, Nebraska and Rutgers have not yet joined the Big Ten. Utah, Alabama, Georgia and UCLA are the only teams that have ever won the NCAA title, and the Bruins are your reigning national champions. In 2000, Michigan finished last in the Super Six (after ending the regular season ranked No. 1), and Penn State narrowly missed a berth out of semifinals. Going into this conference championship, Penn State’s star sophomore Katie Rowland is ranked No. 1 in the all around, and Elise Ray sits at No. 12, tied with Iowa freshman Alexis Maday. National rankings are dominated by UCLA stars, including Kristen Maloney, Mohini Bhardwaj and Jamie Dantzscher, as well as some familiar Utah (Theresa Kulikowski, Shannon Bowles) and Georgia (Kristi Lichey, Suzanne Seares, Marlene Stephens) names. Michigan has won the Big Ten title eight of the last nine years and is looking for another title win at home.

Are we all mentally there? Good. Off we go!

We are reminded that for the first time this year, athletes only vault once instead of twice!

Leslie Bear (PSU): Handspring pike. Not the best leadoff vault for a team hoping to upset Michigan at home, especially considering that it starts out of a 9.900! 9.625

Lori Ruen (MSU): Little hesitant throughout, but she has nice split positions! Straddle. BHS + straddle.  Lands low on her 1.5 dismount and has to adjust both feet, and she had a fall while we were watching vault.

Gemma Cuff (PSU): Half on front layout half, a little offline but clean and good landing!

MaryAnne Kelley (Minn.): Hect mount, Tkatchev good height. Geinger, some leg separation. Toe on half. Straddle back, this routine is PACKED! Giant full + double tuck, just a hop. Wow that is a ROUTINE.

Mary Skokut (Minn.): CAN WE TALK about these pirouetting combos! Pretty pretty. Tkatchev, little messy, straddle back solid handstand. Full in, big bound forward. Getting some scores now, 9.825, just hit for that landing.

Jane McIntosh (MSU): She’s competing with a broken finger, ouch. Backwalkover + split half, very big check. Switch side, huge split! Bhs bhs two feet loso, misses her feet and she’s off. They’ll count a fall. Switch half + split half, shy of 180 on both. Tucked gainer full, stuck. Some highs and lows in that one. 9.0

Stephanie Benson (Iowa): Half on tucked half off, not enough rotation and she sits it, that could’ve been a knee problem, she jumps up but is limping a bit.

Stephanie Gran (Iowa):  Half on half layout, gorgeous and just a tiny hop. That’s the cleanest vault we’ve seen. Iowa is rolling! 9.95

Giselle Boniforti (Iowa): Handspring double full, gets it around, just a step to the side on the landing.

Phaedra Dixon (Ill.): Geinger + bail, just a touch loose in the back. Back uprise immediate stalder. Double tuck, excellent landing. She’s on bars after only tearing her Achilles five months ago! Impressive.

Jill Tucker (tOSU): Half on half pike off, medium step forward, but clean in the air. 9.85

Vagedes (tOSU): Half on front pike half off, too much power and she bounds forward, little off line as well. 9.85, I guess everyone gets that score in this rotation.

Julie Devaty (MSU): Jumping into the middle of the routine. Side aerial in a dance combo, pretty. Double full, some messy legs but a good landing.

Karen Hawley (Ill.): Oh child, you look terrified. Hearing that she had a scary fall on bars earlier. Bhs bhs loso, and she falls. This is either the second or third fall for Illinois, ouch. Switch + bhs quarter, little loose. Double stag. Wolf + sheep. All of her jump positions miss by just a touch. Stuck tuck gainer full.  9.325, not bad considering the fall.

Megan Beuckens (Minn.): Front through to double tuck, solid. FHS front full, good landing. Switch side + Popa + sush, touch overrotated on the side and under on the popa.

Kelley (Minn.): Handspring front half, little messy in the air and a small hop. 9.8

Ray (UM): Hect mount. Uprise + toe hand + hop full + Tkatchev + straddle back. Laid out full in. That is a PACKED routine and every second she had gorgeous toes and lines. 9.95

Carissa Ericsson (Ill.): Half on half pike, medium hop to the side. 9.8