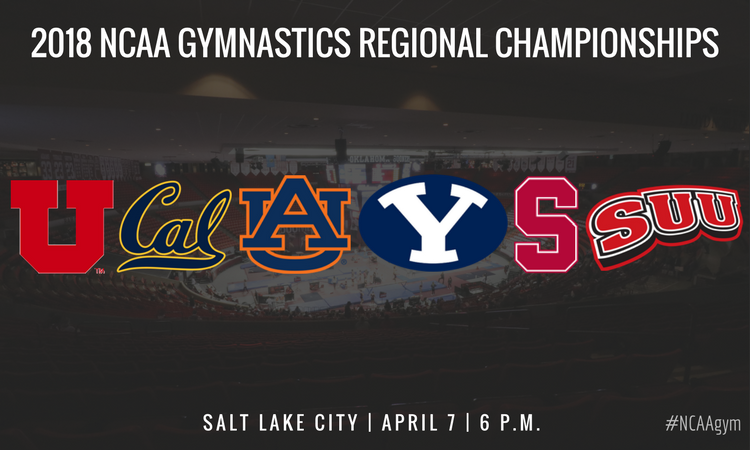 It’s finally that time of the year! We know where each of the top 36 teams in the country will travel to compete for a chance at advancing to nationals. In the days leading up to the championships, we’ll preview and analyze each of the six regionals, discussing which teams have a chance of moving on and which individual could qualify as well. Today, we cover the Salt Lake City Regional regional, featuring No. 4 Utah, No. 9 California, No. 16 Auburn, No. 21 BYU, No. 26 Stanford and No. 32 Southern Utah.

Don’t forget to enter your postseason predictions in the 2018 NCAA Gym Bracket Challenge! The deadline for submissions is Friday, April 6 at 7 p.m. ET.

Utah and California are the two clear favorites to advance out of this regional. The Utes will be in front of their home crowd in an attempt to extend their string of consecutive national championship appearances to 43. They are coming off a second-place finish at the Pac-12 championship where they had a few mistakes on bars and beam. Here, they will start on floor and vault, their best two events, which should allow them to build momentum right out of the gate. Junior MaKenna Merrell-Giles has been Utah’s MVP all season across all four events and is one to watch on all four events. She is Utah’s only gymnast to have scored not one but two 10.000 this season as she earned one on floor and one on vault for her Yurchenko 1.5. Alongside Merrell-Giles, Mykayla Skinner will be another one of Utah’s most important all arounders and is expected to bring her full difficulty like she has done all season, including her double double on floor and her double twist on vault. Sophomore Missy Reinstadtler has had a stellar and consistent season as well and is one to watch on bars and floor.

California made one hell of a comeback in the second half of the season to earn the No. 2 seed in this regional. The Golden Bears were at one point ranked in the high 20s but have made a complete 180 to become serious contenders to advance to nationals for the third time in school history. They are coming off one of their best performances at a Pac-12 championship, where they finished third and recorded the program’s highest beam score in program history. Just like in Tucson, California will start its night on beam and has proved that’s not a problem. Additionally, the Bears are very capable of upsetting Utah as they’ve already accomplished the feat once this year already. Senior Toni-Ann Williams and freshman Kyana George are the leaders of this team in the all around, but don’t miss Arianna Robinson on vault and Alma Kuc and Nina Schank on bars as well.

The Auburn Tigers are coming in as an underdog, but it will be hard for them to qualify over Utah and California if both have a good day. While Utah has been strong all season and California has been steadily improving over the last month, Auburn has been very hit or miss and it’s hard to know which team awaits us each week. The Tigers just finished eighth at the SEC championship after issues on beam and floor, and they will look to bounce back from that with one of their high performances.

BYU has been a fun team to watch all year. The Cougars are coming off a second place finish at the MRGC championship with their highest floor score in 11 years, a 49.400. Floor is indeed the Cougars’ best event as they are ranked No. 13 and have stepped it up this season in terms of fun choreography and difficult E-passes. Shannon Hortman-Evans and Kyleigh Greenlief have absolute must-see routines with their Hawaii Five-0/Jaws and Phantom of the Opera routines, respectively. The Cougars will have essentially the same rotation order as they just had at MRGCs where they started on bars.

Stanford has, in the past, been a very dangerous team at regionals, but it will realistically be hard for the Cardinal to make it to nationals as a team this season. It has suffered from a lack of depth all year and particularly on uneven bars where it has rarely been able to field a full lineup of six. Moreover, the five athletes that are used have had trouble finding consistency, and the Cardinal only scored above a 49 on the event twice this season. It is starting on bars here so fans will know right from the start whether Stanford is a potential upset threat or a team that should focus on doing everything it can to get Elizabeth Price to nationals. That said, the Cardinal have been picking up steam over the last few weeks and finished seventh at Pac-12 championship. But it might be too little too late.

Southern Utah rounds up this regional with the potential to at least upset Stanford as its highest score is higher than the Cardinal’s. The Flippin’ Birds finished fourth at the MRGC championship and have been pretty hit or miss all season. They are capable of scoring well into the high 195s up to 196, but they can also have meltdowns and dive down into the 193s and 194s. They will have the coveted Olympic order here, which can only help them build confidence throughout the competition.

The top two all arounders not on an advancing team will qualify to nationals. To advance to nationals as an individual specialist, a gymnast must win the event.

Assuming Utah and California are the two teams advancing, the most obvious all arounder that should qualify barring disaster is Price. Price is currently ranked No. 3 in the nation and boasts two 10.000 on floor and one on uneven bars. Price has had her greatest season yet and has been a model of consistency all year to become one of the favorites to win the all around title in St. Louis in April. Teammate Kyla Bryant is also in a great position to make it as she is tied for No. 30 nationally. But it won’t be as easy of a walk in the park for her. The gymnast she is tied with is none other than BYU’s Hortman-Evans, so fans could be in for quite a heated battle for the second all around spot.

Much like last season, Auburn doesn’t have a consistent all arounder. Drew Watson competed on all four events a few times this season but has struggled on balance beam and was removed from that lineup for the last month. If Utah doesn’t qualify, expect Skinner and Merrell-Giles to certainly challenge for the two all around spots, but teammates Reinstadtler and Kari Lee will also be in the running. If California doesn’t move through, Williams and George will be fighting to move on as well. Other individual all arounders in contention for all around qualifier spots include MPSF Gymnast of the Year and freshman from UC Davis Kelley Hebert, teammate Alexis Brown and Sacramento State’s Caitlin Soliwoda.

It will be quite hard for individuals to win an event here against the likes of Skinner, Merrell-Giles, Price or Williams. SJSU’s Taylor Chan has scored four 9.900s in a row on floor, but it will likely not hold up against the scores of the four mentioned. Both Hortman-Evans and Greenlief’s high on floor is 9.950 so they will have to have their best day on that event if they hope to advance.