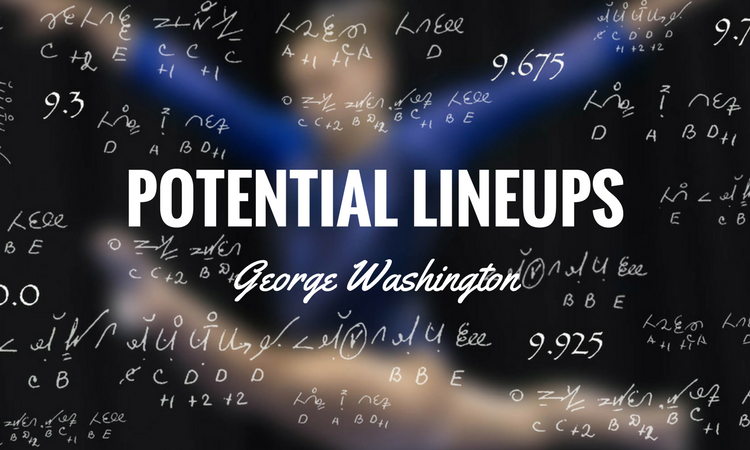 George Washington is a dark horse team that everyone should keep an eye on. Though the Colonials graduated a stellar class in 2017, including all arounder Alex DeMoura and nationals qualifier Chelsea Raineri, they bring in a large group of freshmen that can hopefully fill in the holes left behind.

Vault was a strong event for the Colonials last season, coming in at No. 17, but without the big scores from DeMoura and Raineri, the freshmen are going to have to do some heavy lifting right off the bat. Chloe Vitoff is the strongest vaulter of the class with a Yurchenko layout half, which showcases her clean twisting form. It’s likely she’s being groomed to take Raineri’s place score-wise, especially considering her excellent control on her landing. Olivia Norman is another possibility, with a decent Yurchenko full. But her most recent video looks like it isn’t on competition surface, so it’s hard to judge her level of readiness. Gemma Guttenberg also competes a full. However, her landings are sketchy at best, so we can’t see her making the lineup unless significant improvements are made.

Jillian Winstanley is the clear standout of the veterans with a killer Yurchenko one and a half—the team’s only 10.0 start value vault. She and Camille Drouin-Allaire will be the leaders of this squad, with the latter vaulting just a full, likely closing it out in the five and six spots with scores above 9.8. Sara Mermelstein scored decently with her full last season, typically sitting around 9.75 but scoring as high as 9.825. Considering her consistency, she’s a likely choice for the lead-off role. Julia McLaughlin is also likely to return despite her sporadic appearances and lower scores last season, since she’s one of the only options with competition experience. Alexandra Zois is a possibility, but her three vaults from 2017 were not confidence-inspiring.

There are a few returning Colonials that might compete vault this year that haven’t previously, as well. Elizabeth Pfeiler seems to be trying to add vault for her senior year, with a Yurchenko full as her most likely option. Based on her cleanliness and form in the rest of her gymnastics, we can actually see her making the lineup over a few of the other options, as long as she can consistently land well. Cydney Crasa also did not vault last year, but her full in J.O. was solid, so if she’s needed, we expect head coach Margie Foster-Cunningham to call on her to step up.

Despite bars not being their best, the Colonials did fairly well last season, finishing ahead a couple of Big Four conference teams that we consider to be strong on the event, such as California and Stanford. Still, knowing what GW has lost, we expect the freshmen to contribute heavily to keep pace. Catherine Karpova is one of the strongest choices, with excellent handstands and gorgeous toe point. While she didn’t compete bars in her final few club meets, she’s been featured in training updates this fall, so there should be no cause for concern. Foster-Cunningham recently announced that Rachel Kaplan will be joining the team in January, and bars will definitely be one of her key pieces to contribute. Vitoff’s easy swing and her Gienger with legs glued together should make her a good candidate as well. Anna Warhol is also a decent choice, but with the talent on the team, she may not crack the top six to start out.

Winstanley will again lead the way for the veterans, with Pfeiler close behind, both capable of 9.85s or better on a regular basis. Drouin-Allaire is also considered a lock for this lineup based on her all arounder status, even though bars is not her best event. She’s still consistent, though, with only one fall in 2017 and typically hitting in the 9.75 to 9.8 range. She might be a good choice for the lead-off position because of this. Zois was a bars regular last year, but if Drouin-Allaire stays in to compete all four, she may end up getting bumped to alternate. McLaughlin will also likely be an alternate, as the only remaining Colonial with competition experience.

Beam tied vault for GW’s best event last season, finishing the year at No. 17, so it will likely be a difficult event for the freshmen to break into. Hannah Cohen is the strongest option, with a huge score ceiling, solid consistency and a confident, aggressive attitude in both her acro and dance. Kaplan and Karpova are also good choices, with lower ceilings than Cohen but similar consistency and a more elegant approach to the apparatus. Vitoff isn’t the most polished competitor, but her steadiness and variety of skills should make her an attractive candidate, even if only as an alternate.

As on bars, Pfeiler and Winstanley are the top choices on beam, both regularly scoring 9.85 or better. Winstanley has the higher score ceiling of the two at 9.9, but Pfeiler is the more consistent of the two. Mermelstein, Zois and Drouin-Allaire are also decently high scorers, with highs of 9.875; Mermelstein is the most consistent of the three. Since she led off frequently toward the end of last season, it’s likely she’ll return to that role in 2018. Zois and Drouin-Allaire have had their struggles with consistency, but their scoring capability makes it highly unlikely they’ll be left out of the lineup.

Floor was the weakest event for GW in 2017, coming in at No. 25. The loss of the seniors will be a a blow, as both DeMoura and Raineri earned regular 9.85+ scores. So the freshmen will be called upon to compete almost immediately. Karpova and Kaplan again are two of the best options, both featuring dance-heavy routines and clean twisting form. Karpova has done actual ballet in some of her past routines, which is a major contrast to the majority of routines GW performed previously. Vitoff and Guttenberg are also possibilities. Vitoff offers a mostly posey routine with consistent scoring while Guttenberg has a great aesthetic but lower, inconsistent scores.

The big scores on floor will still likely come from the veterans. Floor is where Drouin-Allaire truly shines, with multiple 9.9 scores over the course of the season. Madeleine Seibold is also a strong scorer, though she got stuck around 9.825 last season. However, she was in a late lineup position often, so as a senior, she’ll likely move later and get a better score-building bump. Another excellent performer is Winstanley, with the team’s only E pass of a front double full and regular scores of 9.85. Mermelstein leading off again in her senior year is a likely scenario, especially considering her consistent 9.75 scores with higher moments added in. Crasa performed floor in exhibition a few times last year, and her one competition performance scored a 9.825.

Winstanley and Drouin-Allaire are the all around stars of this team, so it’s a sure bet on both of them for the 2018 season—Drouin-Allaire is a two-time individual nationals qualifier. However, GW will also have to use 2018 as a season to develop the younger competitors since a good chunk of the Colonials’ very best routines will graduate. Vitoff seems like the likeliest choice, with dependable, solid gymnastics on all four pieces and strengths on vault and bars. Kaplan is also a possibility, though her Yurchenko layout could be a roadblock for her.

This season, George Washington will want to take advantage of its seniors and make the most of their last season in D.C. A total of 14 postseason routines from 2017 will be gone in just a year’s time, causing a gap that will need to be rebuilt in more than a year’s time. But then again, GW has been known to surprise.