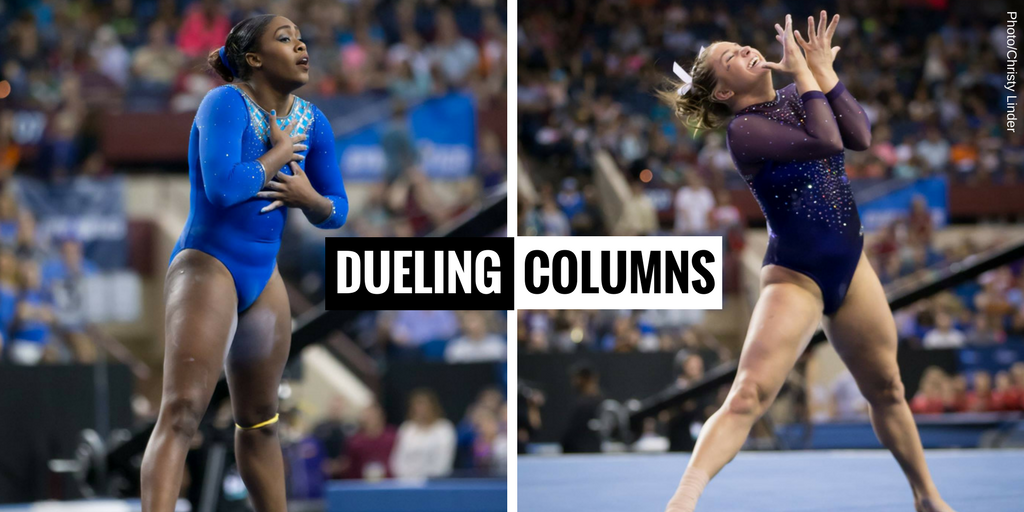 In our next edition of dueling columns, two of our editors, Elizabeth and Christina, discuss whether or not gymnasts should throw floor routines with high difficulty (E passes) or stick with exceptionally clean but more simple routines. For clarity, note that Christina’s opinion is stated in regular font while Elizabeth’s is in italics.
In this day and age of NCAA gymnastics, I think it has become necessary for teams to have multiple routines with E passes if they want to contend for a conference or championship title. While E passes are technically not necessary, they are impressive especially when done well, and do add a dimension of “we are the better team because we are doing harder skills.”  NCAA gymnastics has evolved so much and has become harder. The girls are throwing more difficult skills nowadays than twenty, or even ten years ago, simply because their own levels have increased. It is almost expected nowadays for at least the top 10 teams to throw difficulty and have numerous E passes in their floor lineups.

Moreover as a fan, it is much more exciting to see high-difficulty floor routines and to see teams going all out and really using their gymnasts to the best of their abilities. I personally know I’d much rather watch a floor lineup where I’m going to see difficult skills, like double layouts, triple fulls (I have watched McMurtry’s triple full about 30 times since she competed two days ago) or even a Dos Santos, rather five or six ‘boring’ routines, albeit clean, with a flurry of double pikes, double tucks, and Rudis done in combination. I also find it frustrating when a gymnast goes for a double pike when we all know she’s capable of a double layout.

Furthermore, when all teams end up competing on the same stage at nationals or Super Six, it is possible the judges may be a bit more lenient for girls throwing E passes and landing them clean. Because if you’re going to go for the easy, clean tumbling when we all know you’re capable of much more, it better be exceptional. Just like with our first dueling column about vault start values, I believe judging bias comes into play on floor too. The NCAA code doesn’t have a bonus system in place for the girls throwing the high difficulty, like Mykayla Skinner and her double double, or Kennedy Baker and her Dos Santos. So the judges do end up doing their own little thing and score these gymnasts a bit more leniently than if they were just throwing a double tuck. Let’s face it, Skinner’s form isn’t the cleanest, but her difficulty on floor is so impressive that it would be disappointing if she scored anything less than a 9.900. And the difficulty should definitely be rewarded one way or another. It isn’t really what judges are supposed to be doing since gymnasts with the better gymnastics should come out on top, no matter how difficult (or not) their tumbling passes are, but again, why not take full advantage of it when a team can and has the gymnasts to do so.

While I do believe it’s more exciting to watch routines with big tumbling, it’s not the only way to make floor exciting. Oklahoma is a perfect example of this. Last year at Super Six, the Sooners had two E passes out of their six routines, and one of those Es was only a front double full, the less impressive-looking of the difficult passes. But Oklahoma still not only the highest floor total of all six teams by over a tenth. But not only score-wise, Oklahoma’s routines are a joy to watch. Natalie Brown’s eyes, AJ Jackson’s hard hitting moves and Chayse Capps—need I say more?

I think the important factor is the artistry and choreography. It doesn’t matter as much for a team to have E passes if the dance is out of this world because that makes up for the lack of difficulty.The same goes for UCLA. Some of the Bruins’ top scores on floor last season came from gymnasts without Es and with expressive and crowd-pleasing dance: Sophina DeJesus, Janay Honest, Hallie Mossett…

But even take it a step back and look at gymnasts like Lindsay Mable and Morgan Lane. They are so technically perfect that it’s hard to take anything deduction-wise even if the judges wanted to. If you don’t give them anything to take, the judges can’t help but reward you, even if you don’t have those big double layouts or full-ins.

You pulling the Oklahoma card on me is tough; you know I can never find anything wrong to say about it! I do agree that the Sooners did just fine last season without the E-passes, but can they repeat again this year with LSU looking better than ever and Florida is right there as well? Either way, it shouldn’t be an issue this season since the Sooners appeared to have changed tactics and are going for the harder tumbling passes with Jackson, Nichols, Dowell, and even Capps intermittently with her double layout.

You mention Mossett, and I actually was just re-watching her routine from the Bruins’ meet against Arizona. She’s basically about to go viral at this point, and she did nail the hell out of that routine performance-wise. I really enjoyed watching it, but part of me can’t help but be disappointed that there are only two passes and these are double tuck and double pike. The performance and technique were incredible so of course she was rewarded for that. I personally still was left a bit unsatisfied by the tumbling, but that’s just my point of view as a hardcore gymnerd. I do believe her routine will appeal to the casual viewer, especially because of the music choices and performance.

Besides, I do tend to get a bit bored if not annoyed when I see too much of the same skills and tumbling, and I can’t help but wonder if some judges may feel the same. I am obviously not in their minds, but maybe after judging so much of the same skills, I would guess they may have a tendency to be harsher because they really do know what to look for. So you’re right, you better not give them anything to take. I do wish some sort of difficulty bonus would be put in place for the girls and teams going for it.

I agree artistry and choreography are very important, but if all teams went for the “safe” option of clean, less difficult routines, I think floor rotations would get boring pretty quickly. Because let’s face it, not everyone has the performance abilities of a Sophina DeJesus, an Angi Cipra or a Chayse Capps. I really believe that throwing unique and/or difficult skills and tumbling passes that will wow the crowd plays a huge part in helping NCAA gymnastics continue growing and gaining popularity. That said, it is possible to get the best of both worlds sometimes, like Maggie Nichols, A.J. Jackson or Kennedy Baker this season, Brittani McCullough (UCLA) in 2010, or Nina McGee (DU) and Lloimincia Hall (LSU) a few years ago.

I totally agree! If the performance qualify wasn’t there for some of these “easier” routines, they would be a lot less entertaining. So that’s what gives these gymnasts the edge. I say simpler passes are OK only if the artistry makes up for it. Yeah Mossett only does those passes, but her tumbling isn’t really the “point” of the routine—her dancing is. I doubt you could ask anyone (who doesn’t know gymnastics like the back on their hand) about DeJesus’ viral routine and they’d say her tumbling really stood out!

But overall it really depends on the gymnast. If you can do the big skills, that is your interesting factor and what makes you stand out. In other cases it’s a gymnast’s choreography. But if you have neither? Fans are in for a long road. Or, if you have both?! Like you mentioned Hall, McGee and company… That’s when the routine is truly amazing.​