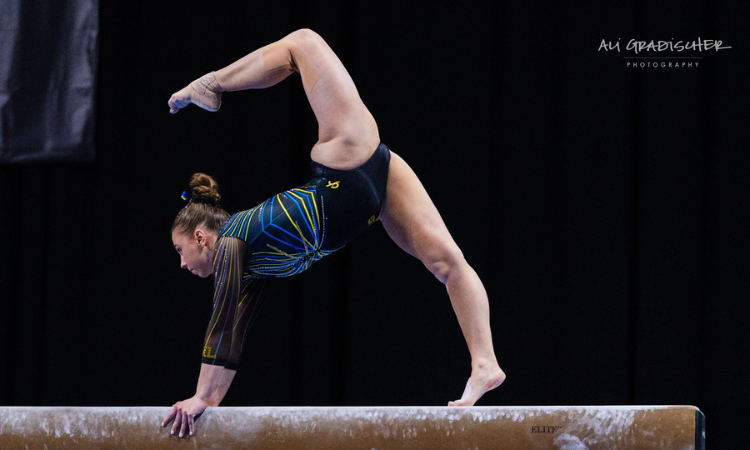 Welcome to the showdown between the No. 1 and No. 3 teams in the Big Ten with Michigan taking on Michigan State. Michigan posted its first ever 198-plus score in Crisler last weekend, so the Wolverines are likely still riding that high heading into its week three match up against its state rival. Michigan is sticking to its tried and true core group of upperclassmen competing the majority of its routines, with only eight competitors seeing action last weekend. While each of these athletes have had 10-worthy routines in their career–Sierra Brooks, Naomi Morrison, Natalie Wojcik, Abby Heiskell and Gabby Wilson–I’m interested to see if more athletes can get in on the action today. But honestly, if it isn’t broken, don’t fix it. Am I right? I do not want to forget to mention that Nicoletta Koulos has made some major waves already this season after missing the majority of 2022 with a wrist injury. Watch out for her, especially on bars and floor.

Michigan State is coming off a thrilling quarter-tenth victory over NC State on the road. After nearly keeping pace with Alabama in week one, the Spartans should be in a confident place mentally. Michigan State is a proponent of using its freshmen, with several beginning to make their mark already this season. Notably, Nikki Smith has some star power in the all around and Olivia Zsarmani is a stick machine on bars. Smith did have a fall on bars last weekend, but bounced back with a solid vault, proving she is a strong competitor.

While these two teams have displayed two very different score ceilings so far this season, let’s not forget that they finished 2022 as Nos. 8 and 9 in the country. With athletes of this caliber spanning both rosters anything can happen.

Morrison (UM): Gienger. Some legs apart. Clear hip to overshoot. Good. Double layout with a hop forward. Nice feet together in the are. 9.825

Kellerman (MSU): FHS front pike half. STUCK. Not super high in the air, but nailed the landing. 9.850

Stephen (MSU): Y full, Stuck with just an arm circle to maintain control. MSU is on a new level tonight! 9.875

Wojcik (UM): Toe hand, Delchev to overshoot. A little wonky on the catch by managed. Double layout, tried to hold but had to take a step forward. 9.800

Nyah Smith (MSU ex): Y full, just a hop. Off center to the left. Bounced right on the line.

Michigan looked a little conservative on bars today, some short handstands and early releases on the dismount. Hopefully, the Wolverines can settle in a little going to vault. Meanwhile, Michigan State stuck nearly every vault, leaving very little room for Michigan to make a mistake. We knew that Nikki Smith could hit an out of this world vault, but it was nice to see this one perfectly stuck today.

Mulligan (UM): Y full, Some leg separation on the pre flight and a tenth step back. 9.825

Schulte (MSU): Shaposh, overshoot. Some leg separation on the back swing. She’s muscling it a bit. Over on the handstand on high bar. Double layout, absolutely stunning. Stuck. Way to finish. 9.325

Morgan (UM ex): Y full, A small step to the side and close to the line.

Michigan State is leading after two! Just like we all anticipated. On a serious note, the Spartans are simply finding their landings far better than the Wolverines. Michigan State’s bar lineup was unphased by a fall from its lead off, an impressive feat for any team. Michigan will look to floor to start picking up the pace, putting pressure on MSU.

Guggino is apparently training an E pass on floor. Will we see it today? Unsure, but exciting news nonetheless.

I will never get over MSU’s war cry the beam team does before the event. Iconic.

Kalefe (MSU): Beam song is Girl on Fire. BHS BHS LOSO. Right on. Switch leap, tuck full, beat. A smile. Cartwheel, gainer full. Stuck. A great lead off routine. So this is how this is going to go. 9.850

Guggino (UM): Smizing at her teammates to start. Double pike. Chest nice and up. Front lay front full. A little hoppy on the landing. Good amplitude. Strong leap series. I love this choreography for her. Front lay, rudi. A little under rotated, had to bounce to the lunge. 9.825

Zsarmani (MSU): A shoulder stand double stag mount. Piked front toss, BHS. So stunning. That is so hard to execute. Switch leap, switch side. Smooth connection. RO 1.5. Pretty big step back. Looked like she was trying to hold onto the stick. 9.825

Heiskell (UM): Dancing queen. Arabian double front. Just a slide back. Switch half, wolf full. Good shape in the air. Some 70’s finger points straight to the “M.” 1.5 to front full. A little back on her heels, but managed. 9.875

Morrison (UM): Half in half out. Nice and controlled. Front lay to front full. Sorry Miss Jackson in saxophone. Switch half, wolf full. This music mix is IT. A shoulder shimmy before the final pass. Right on the landing for the double tuck. 9.925

Stephen (MSU): A cool mount that I’m certain I would trip myself on. Front layout two feet. Walks out like it’s casual. BHS LOSO. Soft knees, so much amplitude. Beat, straddle half. RO double full. Stuck. The slightest crossing of legs in the air. 9.900

Brooks (UM): FTDT. A larger lunge. Tour jete half, split full. Nice shape in the air. Front through to double tuck. Good control there. Emphasized the pause before the lunge. 9.950. Michigan is making up some ground.

Garcia (MSU): Number one in the Big Ten on beam! BHS LOSO. Stunning. Front aerial, split jump. Switch leap, split jump. A little off on that one. BHS gainer full. Stuck. Could have more amplitude. 9.850

Wilson (UM): I’m indeed obsessed with this choreography. FTDT in an open position. Controlled nicely. Front lay, front full. Danced out to cover up the forward momentum. Switch side, popa. Double tuck. Bounced out of it a bit. Really great set until that last landing. 9.875

Lane (UM ex): Tour jete full. Nearly around. Front lay, front full. Back on her heels with a hop. Tour jete half, popa. A little slow in the legs, but good position. RO double pike. Deep in the landing to manage it.

This is going to be a close one folks! Michigan brought some heat on floor, but the Spartans were not backing down on beam. As Michigan heads to its least comfortable event, Michigan State will look to solid landings to try to get the upset. Anything is possible.

Mulligan is warming up on beam, so maybe we’ll get to see an exhibition routine from her? I think that might be her first beam in her collegiate career. Don’t quote me, though.

Bauman (UM): BHS LOSO. Lovely. Cat leap, switch half, beat jump. Smooth connection. So calm. So confident. Side somi. Straight legs to show she’s better than the rest of us. Loved it. Gainer pike off the end. Wasn’t quite patient enough to hold it. A step forward. 9.825

Nyah Smith (MSU): Front tuck through to sky high double tuck. My jaw did indeed drop. Switch side, popa. Back 1.5, front layout. Double pike. A little overcooked with a big lunge to control it. 9.875

Garcia (MSU): Double tuck. Chest slightly down. Front lay, front full. Good control . Beautiful shape on the leaps. Not quite around on the popa. Double pike. Short with a hop forward. 9.775

Koulos (UM): Line up debut!! BHS LOSO. Unsure on the landing with a leg up check. Beautiful turn. Beat, straddle 3/4. Small lean back correction. Cate leap, front aerial, beat. Nice. RO 1.5. A little back but holds onto the stick. 9.775

Brooks (UM): BHS LOSO. Split the beam. A gasp from the crowd. Switch leap, switch leap. A small lean. Front toss. Another lean. She’s trying to get off this beam ASAP. BHS double twist with a scoot back. That’s the score Michigan will want to drop. 9.375

Stephen (MSU): Front through to double pike. A large slide back, just kept it in. Stunning leaps. Amplitude and position just perfect. Front double full. Good control. So hard to end with an E pass, but she made it look easy. 9.850

Heiskell (UM): Cat leap, side aerial. Very large wobble. Bent at the waist and her leg up. Switch leap, switch leap. Back in it. BHS LOSO. A lean back with her front leg up. RO back 1.5. Stuck. A little rushed. Not great but it has to count. 9.550

Nikki Smith (MSU): FTDT. Held the landing to let us know. No deductions here. Back 1.5 to front lay. Good line in the air. That’s my type! Double tuck. A little scoot back into the lunge. 9.900

Schulte (MSU): FTDT, huge. They said there was no flag raised by it didn’t look close to me??? VERY OUT. Front through to double tuck. STUCK. No lunge needed. 9.800

2007… that’s the last time Michigan State defeated Michigan. The Spartans absolutely came to play! This team is letting the country know that last season was not a fluke. Michigan State is more than here to stay. Michigan was a bit tentative and rushy across all four events today, with floor looking the closest to normal. I will say that it was nice to see some exhibition routines that looked realistically viable for depth later in the season.