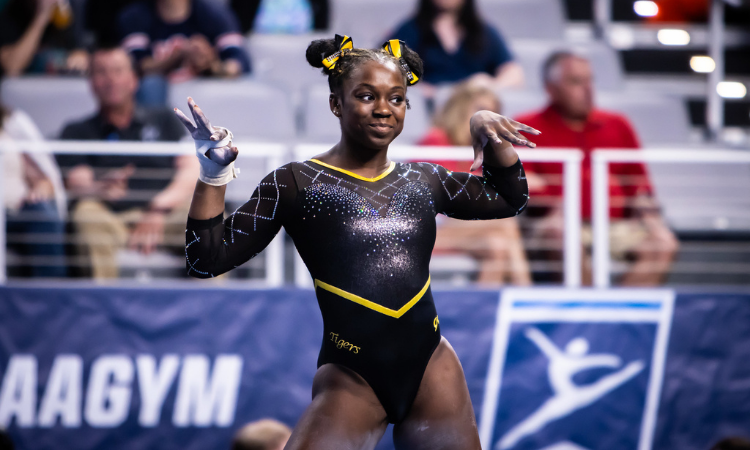 After a historic fifth-place finish last season, the Missouri Tigers have much to live up to. The road to the Tigers’ first meet in January starts right here in the Missouri practice gym with the Black and Gold preview meet. After the last few years have given us a shake-up in SEC rankings, Missouri has become a team to keep an eye on as it attempts to surpass its 2022 finish and reach the national final.

Missouri has vital players on each event that could be pivotal to its success in the 2023 season. On vault, look out for potential 10.0 start values from Jocelyn Moore, Amari Celestine, Jalene Jachna and Addison Lawrence. Over on bars, keep an eye out for Adalayna Hufendiek, who was a regular contributor in 2021 but was kept out of the lineup with injury in 2022. Beam has two established superstars in Helen Hu and Sienna Schreiber, along with the addition of 2021 Missouri state beam champion Courtney Woods. Much like on vault, the floor lineup is also headlined by Moore and Celestine.

Let’s get into it!

Still waiting for the Instagram Live stream to start. Looks like gymnasts are coming in per Missouri’s story.

Lawrence: Just a Y-full for her today, she’s capable of a 1.5 but why risk it. Not too bad in the air, just a little bit of pike.

Schreiber: Best Y-full in the air of the bunch, just a bit short on the landing with a step forward.

Davis: First Y1.5! Good form in the air, a fair amount of distance. A bound forward on the landing.

Moore: Not her biggest 1.5, looks like her hand might have slipped a bit on the table. Short with a step back.

Patricelli: Y-full, a fair amount of pike down and a step back.

Kratzer: Y-full is a little bit tucked in the air, deep landing but only a small hop.

And it looks like with that we are moving on to bars! A few people missing, notably Amari Celestine. If she’s out, this Missouri vault lineup is going to look a lot different than planned.

Sheremeta: Hecht mount is good. Blind change is a little past handstand but jeager to overshoot is good. Another late blind change to Rudi dismount with a large lunge forward.

Hufendiek: Nice height on the jeager, followed by a short bail. Gets the stick on the blind full to double tuck.

Schreiber: Maloney with a little bit of leg separation to bail. Bit of an arch on the final handstand but a very pretty double layout with a stick.

Partick: Hecht mound. Late blind to jeager. A little bit messy on the bail but nothing major. Another very nice double layout and a stick.

Moore: Toe on to HUGE tkachev to overshoot. A bit late on the last handstand, but a floaty full-twisting double tuck dismount with a step back.

Hu: Huge church to pak, absolutely beautiful. Keeps the legs together in the Van Leeuwen. Blind full is a little late into a double tuck with a hop back. The pirouette is the main thing to take here.

Celestine: Toe on to Maloney is good to an archy pak. needs to re-cast to get the half-turn. Gets the stick on her stalder front pike half dismount.

Bachele: Maloney with a large leg separation to a similarly straddled pak. Final handstand is a little short with a bit of an awkward hop back on her double layout.

Davis: Toe on to big tkachev to overshoot. A bit short on the last handstand into a toe on to toe on front pike half dismount. Mizzou really taking full advantage of the number of bars dismounts in the code.

Turns out that the Celestine routine was warm-up. Replicates her first routine without the hesitation on the cast half.

That’ll be it for bars, showcasing a lot more depth than on vault. Lots of good routines here, especially the dismounts. Hu, Celestine, and Davis were the highlights here for me. It was nice to see Hufendiek back after missing 2022 with an injury.

Looks like we’re going to be alternating for these last two rotations between beam and floor.

McCrary (Beam): Front toss to beat is nice, a little bit deep on the front toss. Bhs to loso with a small adjustment. Switch leap to stag ring-ish, not very stag not very ring but I think that is the goal. Full turn is clean. Gets the stick on her gainer pike dismount. 9.8.

Schreiber (Floor): Very intense music here. Starting off with a rudi to back layout to split jump, very unique and well executed. Second pass is a front full to front layout to stag jump, good twisting technique there. Switch full to split full is good in split positions, a bit cheated in the rotation. This went 9.900.

Poddig (Floor): Starts out with a rudi to LOSO, not bad but a bit out of control on the landing. Follows that up with a double pike. Switch half to straddle full to Shushunova is nice, I think she’s going for a switch full there but I’m not entirely buying it. Good otherwise. 9.75.

Schaffer (Beam): Full turn. Back handsprings to back handspring to LOSO, pretty in the air but can’t keep it on the beam. My stream gave up for a little bit but came back for a leg up wobble on a front aerial. Switch leap to split leap was nice. Gets the stick on ger roundoff to back 3/2 dismount. 9.05.

Lawrence (Floor): Double pike a little low but stuck cold. Mos Eisley Cantina music is fun. Split full to wolf full, not the cleanest but not terrible. One and a half to front full also stuck cold, great form there. Third pass is a back 5/2 with a hop sideways. Very good work. Suddenly we have scores and that was only 9.675.

Newson (Beam): Switch leap to switch leap, good split positions. Off on her back handspring to LOSO, didn’t get enough rotation there. Full turn. Cat leap to side aerial without any wobbles. Back handspring to gainer full is stuck! Shame about the fall, technique looked good otherwise. 9.25.

Sheremeta (Floor): Front handspring to front double is well around. Switch side to Johnson is well rotated. We’re spelling something in the middle of this routine, not sure what. Rudi to a floaty LOSO, very nice. Sheep jump/Shushunova combo is mostly for choreo but very cool. Back 3/2 to front LOSO is beautiful. 9.85

Woods (Beam): Side aerial, pause into the beat jump. Kicks out her full turn. Front aerial to front handspring, once again a pause between the two. A bit shy on both her switch leap and the connected split jump. Beam jump to Korbut is nice. Front aerial gainer full off of the side is very unique! Just a small hop forward. 9.65.

A lot of promising work on both beam and floor there. Lawrence didn’t get a huge score here, but her routine has a lot of potential. Sheremeta and Shreiber are still delivering some very unique tumbling which is greatly appreciated. Over on beam, there were a couple of falls, but the technique there is undeniable, especially from Helen Hu.

Welcome to beam and floor two: electric boogaloo. We’ve already seen a fair few routines on both pieces, so excited to get a second serving!

Lawrence (Beam): Switch to split is very nice, good extension. Full turn. Side aerial to back handspring, no wobbles but bent knees in the back handspring. Front aerial. Gets the stick on her roundoff to back 3/2 dismount. 9.9!

Kratzer (Floor): Double tuck, big amplitude, less control. Switch side to popa is passable. Back 3/2 to an archy layout. She is selling this routine! Double pike, similar landing to her first pass, hop back. 9.7.

Baechle (Floor): Double tuck to start, a bit low with a hop forward. Once again very intense music. Second pass is a one and a half to front layout, not bad. Switch side to popa, a bit short of straddle position there. Last pass is a rudi and she has to put her hands down. 9.05.

Schaffer (Floor): Opes with a rudi to loso, nice control. Switch ring to split full. Double tuck isn’t full around and she puts her hands down. Lone Shushunova. 9.25

McCrary (Floor): Front layout to rudi, well controlled. Switch side to popa with a small hop forward. Double pike is also very nice. Wolf jump full to lying support to end. Picking up where she left off last season. 9.9

Schreiber (Beam): Full turn. Back handspring to loso, big leg up wobble and she’s off. Beat jump to split 3/4 is nice. Not sure if my stream is skipping around or if she did a standing LOSO, either way, looked nice. Beat to gainer full and a stick. 9.4.

Moore (Floor): Double layout is huge but a little short with a hop forward. Switch half to popa to popa, HUGE amplitude but the second popa isn’t full around. Front tuck through to double pike is well controlled. Ends with a dip I am obsessed. 9.8.

Can we have a hand for that beam rotation? Across both beam lineups they went 49.45, without counting their highest-scoring routine from last season. Floor was also very impressive.

So overall, how do things look for the Tigers? I’m not sure if the stream started a few vaults in or if only six gymnasts vaulted, but if the latter is the case I am a little bit concerned. Not having Celestine in that lineup will be a critical blow. That being said, we still saw 10.0 start values from Moore and Davis, with one more potentially materializing from Lawrence later in the season. Bars looked pretty good too, with Helen Hu being the highlight there. Davis is going to be a threat in the all-around if she can keep up this pace. Thank you so much for joining me in the first live blog of the 2023 season! 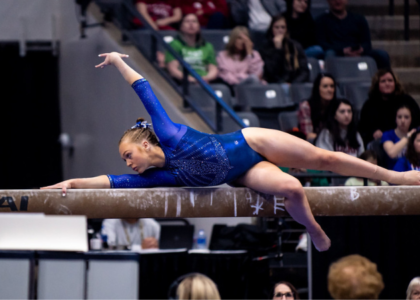 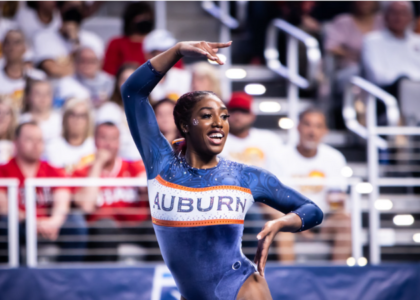