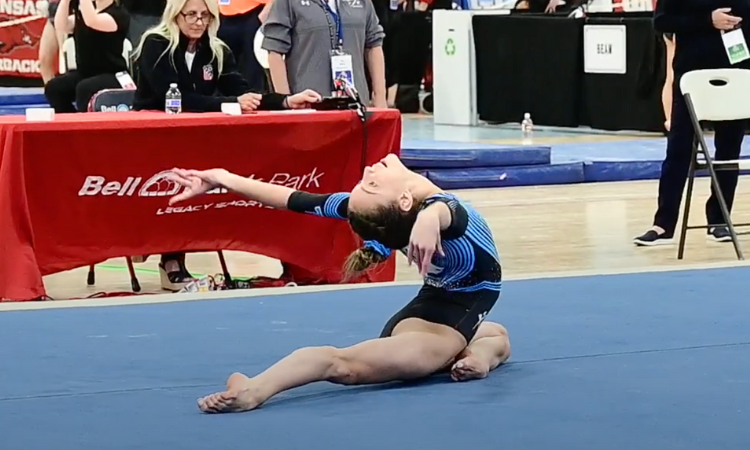 With our third round of recruit ratings officially out in the world, we wanted to sit down once again and discuss some of our thoughts about the process, recruits and changes from this year’s release. If you haven’t had a chance to check out the new class of 2023 ratings or the first ratings for the class of 2024—or have questions about the process—head over to the landing page.

The latest ratings are finally released! Starting with the class of 2023, which recruits stood out to you the most? This could be someone who made a big jump from the first time rating, someone you were particularly impressed by or anything else related to the recruiting class.

Elizabeth: I was pleased to see Annalise Newman-Achee jump to five stars. She’s an underrated member of the class of 2023 and currently uncommitted. I think whichever team nabs her will be getting away with a gem of a gymnast.

Emily M: Lily Smith remains immaculate, but that’s a surprise to no one. Her vault is so improved over last year, and that really helped her solidify her spot as a very top recruit. She will be such a huge asset at Georgia.

Claire: Jamison Sears has been one to watch in this recruiting class for many years, but she’s really come into her own this season and established herself as THE one to watch.

Tara: Chloe LaCoursiere made a splash last year with her perfect rating on bars, but she improved her score on every other event this season to jump to five stars.

Jenna: I was very impressed with Ella Zirbes. In last year’s evaluation of her we had to use old videos from her days in junior elite, so it was great to see more recent level 10 footage that we were able to use this year. She has improved a lot and received one of the highest video review totals of the entire class!

This was the first time rating the class of 2024. Which recruits do you want to shout out from this class?

Elizabeth: I loved Amy Fukami from the moment I saw her. Her form is great, and she just narrowly missed earning five stars from us. I think next year she’ll get there with just minor improvements, and I can’t wait to see where she ends up in college.

Emily M: I was blown away by Mika Webster-Longin on beam. I immediately took to Slack and made the rest of the team watch her nationals routine. She has that X-factor combination of finish, extension and poise that makes for collegiate stars. She strikes me as a gymnast who has a lot of growth left in her, too, so I can’t wait to see how much extra polish she shows up with for her next level 10 season.

Claire: Jazhara Swaby-Ranger earned a four-star rating and a berth to nationals in her first year as a level 10. She strikes that very rare balance between power and grace where even her hardest skills look effortless. This is especially noticeable on beam, where her wrist and finger extension stand out as much as her near-elite level difficulty.

Tara: Camille Winger is great—past her good form, she performs a nice piked full-in. Elle Mueller is a four-star recruit, and she has a nice presence that will translate well to college.

The class of 2024 is the first where everyone was uncommitted prior to June 15. That being said, who are you most looking forward to seeing commit and eventually compete in college?

Elizabeth: I mean, obviously Avery Neff. She’s the highest-rated recruit, points total-wise, since we created the system, and she is going to be a force in college. She really has her pick of schools, and I’m excited to see her finally compete in NCAA gym.

Emily M: I’m interested to see where Ady Wahl ends up. She’s gone to some big-time camps (Florida, Georgia), but she’s from Ohio. Will the Buckeyes snag a big-time in-state recruit?

Claire: Kelsey Slade. She’s already an outstanding all-arounder and one of the top vaulters in the country with room to upgrade. Whatever program she chooses, she has the tools to make an immediate impact.

Tara: Our top four recruits are absolute STARS, and I can’t wait to see where each will end up. We’ve already seen Lily Pederson to Oklahoma and Danielle Ferris to Florida between the time I wrote this and publishing, which leaves two of the four still uncommitted at the time. I’m particularly interested in Avery Neff. Will she go to Utah, or will she end up elsewhere? Like Elizabeth said, she has lots of options.

Jenna: I’m going to go with a pair of elites in Kaliya Lincoln and Kailin Chio. Lincoln is a star performer who will absolutely thrive in the NCAA atmosphere, and Chio has been one of my personal favorite junior elites to watch in recent years.

We have two years of ratings under our belts now. What adjustments or improvements were made for this round? What are still some of the limitations you hope we can improve upon in future ratings—and why can’t we fix them now?

Elizabeth: The biggest limitation is bandwidth, which makes us unable to rerate graduating seniors as they head off to college. While this is low priority since 90% of these gymnasts are already committed and off to college, it is a small bummer we can’t highlight the gymnasts that make big improvements in their senior year. We’re hoping to find a way to help with this issue. Apart from this, we’ve also considered waiting to release elite ratings until the summer or early fall since the bulk of the elite season doesn’t occur until July or so anyway. That’s another area we’ll be looking into for next year.

Emily M: I will let Jenna and Rebecca define the ins and outs of the tweaks we made, but a big one was opening up ratings to more editors this year. We only have senior editors who have been around the block a few seasons participate, and it is a big commitment. Having more voices in the room this time around was definitely valuable. When we have big discrepancies on a gymnasts, which is rare, we talk them through, and so I think having more of us working on ratings and more voices in those discussions was a big plus this year.

Tara: It was definitely tough to find enough video content for some of the elites within the time boundary—especially those who only competed at Classic—and we don’t always see full-strength sets at early season meets like Winter Cup should the gymnast even compete.

Jenna: Unlike last year, we didn’t make any major changes to our formulas or scoring guidelines. Once we applied our formulas to the level 10 scores this year, however, we noticed that the resulting score points were significantly higher than expected, suggesting that there was some score inflation in level 10 similar to what we’ve been seeing in NCAA. This resulted in us modifying the cutoffs we use to determine score points on each event, which we’ll continue to do each year based on the entire body of scores we use. I’ll also add that we took a different approach to gathering our list of gymnasts to rate this year. In past years we started with a list of gymnasts in each class and only scraped the level 10 scores belonging to those gymnasts; this year we scraped all level 10 scores from the last three years and manually looked up the class years of each gymnast. This was an extremely time-consuming process, but we hope it has resulted in us not overlooking anyone who should’ve been included, as that was an issue that came up last year.

Finally, what do you hope the public takes away from or keeps in mind about this year’s release or the database in general?

Elizabeth: We say it every year, but these ratings are based on gymnasts’ readiness for college now and don’t take into account perceived potential or potential coaching (whether it’s negative or positive) at their eventual chosen school. Plus, I want to emphasize that our ratings system is very mathematical and as unbiased as they can be—maybe even more so than the football and basketball systems, which don’t have strict scores to incorporate into their formulas. It’s also important to keep in mind that the ratings aren’t “just” scores or results but are an all-encompassing look into a gymnast’s college readiness at this point in time.

Emily M: They’re working. Local papers and fan bases have started to reference the ratings to help communicate the level of talent recruits are bringing in to people who don’t necessarily understand gymnastics. That was always the goal. We know that our readers are often hard-core fans who already know these recruits, so we understand why they may seem unnecessary to our usual audience. But, in my opinion, they’ve proven to be an extra avenue to both celebrate great level 10s and elites and to help bring gymnastics to people who don’t have background knowledge in the sport. Win-win.

Claire: This is a labor of love, and it requires a lot of our collective time and effort. Never mind the rating process itself; it takes an incredible amount of legwork just to access the resources—specifically competition footage and verified meet scores—we need to do the ratings in the first place.

Tara: Ratings are a good thing and do great things for publicity! We’ve seen so many local outlets pick them up already, and they do a great job at quantifying a recruit’s potential impact for the general fanbase. With that said, they’re also not the end all be all. There’s always going to be people who exceed our expectations and some that fall short regardless of the high level of objectivity and statistics involved in calculating the final rating.

Jenna: We do this out of love for the sport and a desire to see college gymnastics grow and receive better mainstream media coverage. And as always, a lower rating is not a bad thing! There will always be many gymnasts who end up outperforming their rating (or lack thereof!) once they reach college, and we truly celebrate this and don’t view it as a failing. Gymnastics is a difficult sport to scout from a public perspective; we don’t have nearly as much video available as in other sports, and the high injury rate also makes it easy to overlook future college stars. We primarily make these ratings to provide ways for schools and local media to market signings/freshman classes and appeal to non-gymnastics fans who don’t understand the intricacies of the sport but know what a four-star recruit is. We’re constantly thinking about how we can make improvements to our formulas and processes.

READ THIS NEXT: Glowups in the Class of 2023 Recruit Ratings