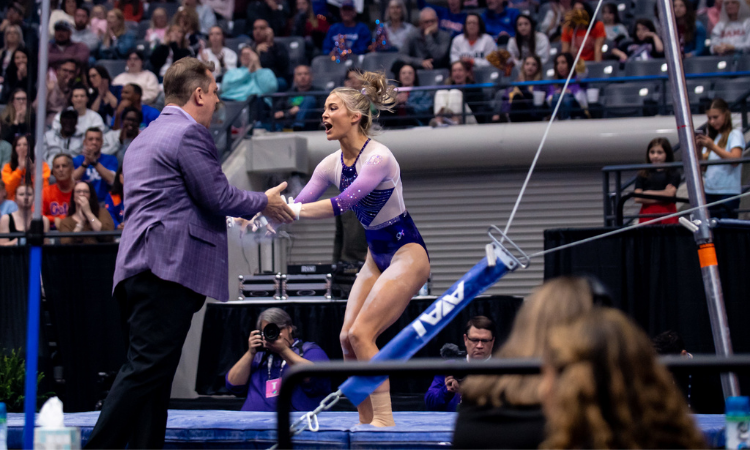 No. 6 LSU has the clear advantage but is coming off a disappointing fifth-place finish at the SEC championship. Will this galvanize the Tigers or will their tough luck continue?

This was the big question heading into the first session of round two of this year’s Raleigh regional. LSU, a mainstay at the top of both the SEC and national rankings in recent years, struggled mightily at its recent conference championship after an uneven performance in the regular season.

As the final totals flashed across the scoreboard at Reynolds Coliseum, they confirmed that for the third time in as many meetings Missouri had finished ahead of its fellow SEC Tigers, sixth-ranked LSU. Far more shocking was that the 20th ranked Iowa Hawkeyes had also outscored LSU, securing the second and final berth to the regional final and a chance to advance to nationals.

This was a familiar scenario for LSU’s head coach Jay Clark, who recently finished out his second season at the helm of the storied LSU program. Just over a decade ago, then first-year Georgia head coach Clark saw his team unexpectedly fall short in its nationals bid, losing out on a tie-breaker to Oregon State and failing to advance a team to nationals for the first time in program history.

There’s certainly an argument to be made that Georgia’s athletic department never gave Clark a fair shake. A learning curve is to be expected for even the most seasoned of coaches, and Georgia’s gymnastics program during Clark’s tenure looked downright robust compared to its current state. That said, Power Five athletic directors are only willing to indulge a new coach’s growing pains for so long: When an established program goes from reigning national champion to missing nationals in the course of a single season, that coach had better show some major growth fast.

Georgia did improve the following two seasons, qualifying a full team to nationals and scraping up a handful of individual titles and accolades, but that improvement was not enough. Clark resigned from his position at the end of the 2012 season and subsequently accepted an assistant coaching position at LSU under the SEC’s Dean of Coaches, D-D Breaux.

With all of that in mind plus the benefit of hindsight, how do Clark’s first two seasons as sole head coach at LSU compare to his time at Georgia?

Georgia Gymnastics Prior to Clark

LSU Gymnastics Prior to Clark

This year’s postseason results are a heavy—but not devastating—blow to Clark’s job security. Ultimately, money talks, and a reliably sold-out PMAC plus one of the most profitable college athletes currently competing speak volumes and affords Clark a wider margin of error than most coaches in his shoes.

Even so, 2023 is potentially make-or-break for Clark. LSU will be losing seven routines from its 2022 lineups, not to mention much-needed depth and experience from the six upperclassmen who are moving on. The incoming freshman class is incredibly strong, featuring a quartet of four-star recruits—Annie Beard, Bryce Wilson, Lilly Lippeatt and Ashley Cowan—and the 2023 recruiting class is even stronger. As of fall 2020, Clark’s contract was good through June of 2025, meaning he theoretically has three seasons to convert all that talent and potential to tangible results (and the sooner the better).

In a subjective sport like gymnastics, it’s virtually impossible to ascribe the title “greatest of all time” to any single person. However, when it comes to assistant coaches, Jay Clark is doubtlessly in the conversation. He is widely regarded within and beyond the sport as an expert marketer and a master at recruiting, and he deserves ample credit for his contributions in growing the sport to its current cachet. What Clark has yet to prove is his ability to lead a program to postseason glory without the safety net of an all-time great supporting him.

READ THIS NEXT: By the Numbers: Comparing Courtney Kupets-Carter and Jordyn Wieber

Article by Claire Billman
Like what you see? Consider donating to support our efforts throughout the year!