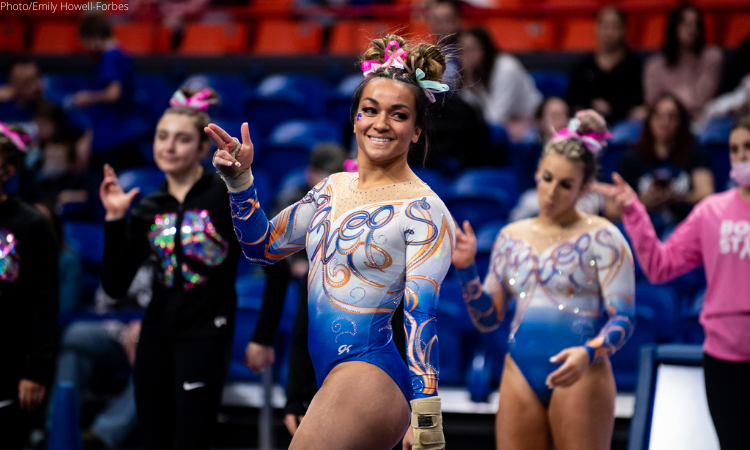 It doesn’t seem possible, but there are only three weeks left in the regular season, which means it’s already time to think about postseason. As a reminder, postseason qualification is based on NQS, which is calculated by taking a team’s top six scores of the season, at least three of which must be on the road, dropping the highest score overall and averaging the remaining five.

We’ll be looking at each team’s highest possible NQS after this coming weekend and discussing what they’ll need to do to finish in the top 36 and make regionals. However, this week is a little tricky because many teams have two meets on the schedule. In these cases we’ll simulate the maximum possible NQS by assuming the team matches their current season high in both meets.

For the purposes of this article, we’re assuming every team currently ranked in the top 20 will make it to the postseason ranked at least No. 28, which is an important cutoff since play-in rounds should theoretically contain teams ranked No. 29 through No. 36. However, we’re also assuming that Oregon State and Arkansas, neither of which currently have enough scores to calculate an NQS, will both end up as top 20 teams. So we’ll be looking at teams currently ranked No. 19 through No. 43 in this week’s article rather than Nos. 21 through 45 like we did last year.

Here’s a visual depiction of where each of these teams finds themselves going into week nine. Yellow is the team’s current NQS, blue is the season high score and red is the lowest score currently factoring into the NQS calculation. Teams with a wider spread among the three circles have more opportunity to increase their NQS over the next few weeks; teams with circles bunched together are unlikely to move up the rankings unless they start scoring substantially higher. 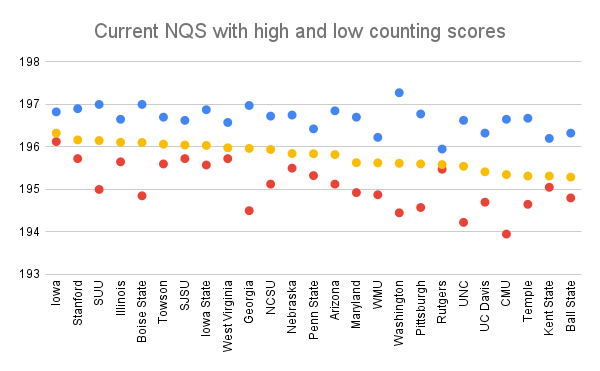 Now let’s dive into each team’s scenarios! Bold scores can no longer be replaced in the NQS calculation while scores with a strikethrough indicate it is the team’s season high, so it is currently being dropped. Scores with an asterisk indicate that they can be replaced this coming weekend. Since a lot of individuals don’t have enough scores for an NQS yet, we’ll wait until next week to take a look at which gymnasts are likely to be in contention for regionals qualification.

Iowa is one of those teams with all its NQS-counting scores bunched close together, so to move up the rankings it’s going to need some new season highs. However, at No. 19 (effectively No. 21), the Hawkeyes are probably safe from the play-in round.

While Stanford has a double meet weekend, it follows it up with a bye week, so whatever gains the Cardinal makes this week will likely be lost the following weekend. A top-16 seed for regionals seems unlikely at this point unless the current season high is exceeded multiple times.

SUU has four scores above 196.500 counting toward its NQS right now, but also two scores in the 195s. Both low scores came on the road, so the Thunderbirds will need to focus on replacing those in their two remaining road meets. If they are unable to replace them, that’s where things could get dicey.

Illinois has two low scores counting toward its current NQS, but the good news is they can be replaced by any of the Illini’s four remaining meets. While a season high this weekend wouldn’t cause much movement, next weekend’s scheduled double header will provide a great opportunity to secure their spot in the top 28.

Boise State has a fantastic opportunity to climb the rankings this week; dropping that 194.850 would be a huge relief for the Broncos. They are also still counting a 195.975. Dropping both those scores over the final three meets could potentially move them into top 16 territory come regionals.

Unfortunately for Towson, its three highest scores this season have all come at home; unless that trend changes, the Tigers are unlikely to remain in the top 28 as lower-ranked teams will potentially pass them in the rankings.

San Jose State has been somewhat of a surprise this season, setting not one but two program records. The Spartans will likely qualify to regionals for the first time since 2014, and even if they end up in the play-in round, they have several strong contenders for individual qualification.

Iowa State is currently counting two sub-196 scores with three meets left to replace them. However, the other counting scores are still in the low-196 range, so the Cyclones are going to need a couple of repeat performances of that season high to remain in the top 28. Should they fall short of that goal, they should be able to qualify multiple athletes on both vault and floor.

West Virginia’s NQS-counting scores are more tightly clustered than most other teams’ in this article, which indicates its chances of making a move up the rankings is unlikely without multiple season highs being set in the remaining weeks. While chances are the Mountaineers will still qualify to regionals, a play-in feels difficult to avoid.

Georgia is in prime position to move up: a 194.500 to drop and four meets left to do it, including two opportunities this weekend. With a couple more high 196s the Gymdogs could even find themselves in the conversation for a top 16 seed come regionals.

N.C. State has two low scores left to drop; if those scores can be successfully replaced by 196s, the Wolfpack will have a great chance of avoiding the play-in round. The team’s highest scores of the season have come in recent weeks, so chances are high that NCSU will rise in the rankings by several places after its double header this weekend.

Nebraska has three mid-195 scores to replace and exactly three meets to do it (no pressure!). The Huskers’ scores have been trending up in recent weeks, but there is no room for error with regionals qualification on the line.

Penn State has the lowest season high we’ve seen on this list so far, and it’s also lower than five of the seven teams that follow it in the rankings. This puts the Nittany Lions in a dangerous situation; unless they start scoring significantly higher (and do it multiple times), they may find themselves outside of the regionals qualification cutoff.

Arizona can make a significant leap in the rankings by replacing its 195.125 with a season high at home this weekend against Oregon State; this would do a lot to keep the Wildcats away from the regionals bubble. However, should this weekend not work out, there is still a double header next weekend, plus the Pac-12 championship.

With the highest number of meets remaining out of any team on this list, Maryland will have ample opportunity to drop that 194.925 from late January. The harder part will be replacing those road scores, as the Terrapins have yet to score a 196-plus away from their home arena. The first opportunity will come tomorrow night at the Temple quad meet, as Maryland kicks off the first of two consecutive double header weekends.

WMU is effectively No. 36 right now after factoring in Oregon State and Arkansas, meaning it is the last team currently projected to make regionals. Dropping that 194.875 would go a long way toward staying in qualifying position, but replacing those mid-195s with 196-plus scores in the remaining weeks would provide some extra security.

When we first started putting the data together for this article, Washington’s odds weren’t looking good, with two low road scores counting but only one more road meet on the schedule. But someone in Seattle is clearly doing some calculations as well, because the Huskies have now been added to BYU’s home meet this Friday, according to Road to Nationals. This increases UW’s regionals odds by quite a bit, but only if it takes advantage of the opportunity and posts 196-plus scores in its remaining meets.

Pitt’s top four scores of the season have come in its last five meets, including its season high at its most recent home meet. A repeat performance at home this weekend would improve the Panthers’ position, but exactly how much will depend on how the other teams in this list perform as well. Pitt needs not only to have a solid showing at home this weekend but also to improve its two remaining road scores in the coming weeks.

Unfortunately for Rutgers, its NQS-counting scores are clustered extremely close together, with the lowest spread of any team on this list as well as the lowest season high. “Slow and steady wins the race” is not applicable to college gymnastics, so unless the Scarlet Knights can set a much higher season high at home this weekend and then maintain that level through its two remaining road meets, they’re not going to stay in the regionals conversation.

North Carolina is a perennial bubble team that keeps finding itself just barely missing the cut, but there have been times this season where it seemed this would be the team to break that pattern. The injury to star freshman Lali Dekanoidze hurts, but this team is still capable of putting up high scores. Replacing that 194.225 this weekend would be a great start.

UC Davis’ scores have been trending up all season, starting with three 194s, three 195s and most recently two 196s. If the Aggies can continue that 196-plus trend, they have a decent shot at making regionals, but any lapse to that pattern is likely to result in staying on the outside looking in.

Like UC Davis, Central Michigan has been trending up, with all three of its 196-plus scores coming in the last three weeks. However, CMU has more spread in its NQS-counting scores, meaning there is a higher likelihood of an improved ranking if the trend continues. If the Chippewas can replace both its 193.950 and 194.650 scores with 196-pluses, they will be in a much better position to make regionals.

Temple’s scoring distribution this season is odd: Its two lowest scores have come in its only two home meets, and all of its current NQS-counting scores come from road meets. With a double header at home this weekend, that trend will need to be reversed in order for Temple to have any chance at making regionals; the Owls will likely need 196-plus scores in at least three of its remaining four meets to have a shot.

Kent State’s odds for making regionals are very slim, with a season high of only 196.200 and no other scores above 195.600. Like Rutgers, the Golden Flashes will need to set a new higher season high and then maintain that level over the rest of the season to be in the conversation.

Ball State is already locked into counting two sub-196 scores, so entering the regionals conversation is unlikely unless it can repeat its season high performance three times in its remaining three meets.

READ THIS NEXT: Fantasy Central: Week 9