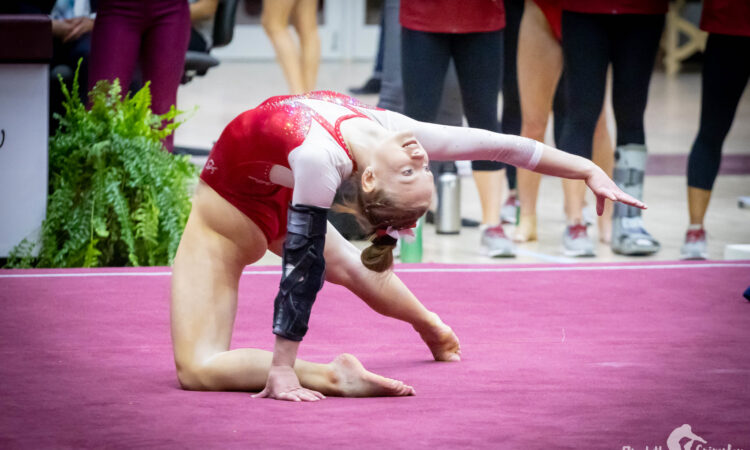 Georgia got back to its usual beam selves last week after some pretty disastrous rotations from the weeks before. The GymDawgs hit six for six in their routines against Auburn which resulted in a season-high 49.350 score. The lineup consisted of Rachel Baumann, Sarah Cohen, Haley De Jong, Mikayla Magee, Emily Schild, and Victoria Nguyen so if the GymDawgs want to continue that momentum into tonight’s meet, I expect that they keep that lineup. This is key for Georgia to accomplish as they are the only team in the SEC left to break the 197 score.

Arkansas has been quite a hit or miss team this season and unfortunately, they are coming off a miss last weekend in a tri-meet against LSU and Missouri. The Razorbacks frankly, had no major issues, they just couldn’t get past their opponents. Arkansas had solid all-arounder Kennedy Hambrick back in the lineups after being absent from the Kentucky meet but she only competed vault, beam, and floor. This week they will be relying on their senior leadership to produce a “hit” meet in contributors Maggie O’Hara who has a spectacular double layout dismount on bars, Sarah Shaffer and her totally stickable Yurchenko half on vault, and Bailey Lovett, with her beautiful double layout opening pass on floor.

You can watch tonight’s stream here and view the scores here.

With that being said, let’s begin!

While we are waiting for Auburn vs Kentucky to conclude, check out this article comparing tonight’s two extremely successful head coaches Jordyn Wieber and Courtney Kupets-Carter. It is written by our very own Claire Billman!

Still waiting… Auburn vs Kentucky meet is on last routine so shouldn’t be much longer.

Sedlacek (Ark): 1.5, little underrotated heading into the landing, step back to gain control. 9.750

Roberts (UGA): Maloney to bail, great swing on these release moves. Double layout, good shape in the air with a hop on the landing. 9.825

Hambrick (Ark): Yurchenko 1.5 with a tremendously clean body position in the air, definitely the kinda of air time you need for a stuck landing but lands with a hop. 9.850

Both teams started off strong with no falls in their first event and will definitely be wanting to continue that momentum for the rest of the night. In the next rotation, look for Georgia’s new vault lineup now that they have lost senior Rachael Lukacs to a season and career-ending injury as well as Arkansas’ Maggie O’Hara on bars.

Looks like perhaps Soraya Hawthorne is the new vaulter in lineup?

Smith (Ark): Maloney to bail, great so far. Double layout, slide back of the feet on the landing. 9.800

Hawthorne (UGA): Full twisting Yurchenko, lots of power and a huge step back. Broadcast says she is training a 1.5, I’m thinking that now would be a good time to move that to competition. 9.675

Hambrick (Ark): Blind half to piked jaeger, only catches the fingertips and falls to her belly on the mat. Tries it again, catches it, and connects it to an overshoot. Full in dismount, stuck. Great comeback after the fall. 9.350

Shaffer (Ark): Maloney and the typical Maloney fall you expect. Catches the bar but falls to her back. Tries it again and gets it, hits that handstand on the bail. Double layout, step forward. 9.250

Roberts (UGA): 1.5, hop forward. Some pre-flight execution errors on this vault as well, but nails the landing. 9.900

O’Hara (Ark): I LOVE MAGGIE O’HARA! Blind half, doesn’t push over the bar and comes down. Back up on the bar, tries it again and overcooks it going into the straddled jaeger. GORGEOUS double layout, and sticks it. 9.325

And UGA takes the lead after two! By a full point nonetheless! That sure was a crazy Arkansas bars rotation; not quite certain what happened and why it kept happening, especially considering that all three gymnasts who fell are seniors. Could be the emotion of senior night?

Broadcast is saying that Georgia senior Megan Roberts was inspired by Georgia alum and Canadian Olympian Brittany Rogers to commit to Georgia. In fact, Georgia was the only school Roberts visited! What a fun tidbit!

Perez-Lugones (UGA): I love her in this routine! Double pike to start, good control on that landing. RO whip half to front full, lacking some height and control on that pass. Double tuck for her last pass, pulls it around. 9.800

O’Hara (Ark): I Am Woman beam music for her tonight. Side aerial to BHS for her acro series, a little off on the side aerial, gets it back on, takes an additional step back which will probably be a control-related deduction. Cartwheel to 1.5 dismount, stuck landing! 9.775

De Jong (UGA): Triple full, exact same landing as last week, just too much power she has to harness in. Stuck double tuck last pass. Lots of energy in this routine. RO 1.5 to front layout, misses the timing on the front layout and takes the fall. 9.000

Lovett (Ark): Front aerial to LOSO, difficult connection. Lovett is such an underrated gymnast. Side aerial to full twist dismount, small hop on the landing. 9.900

Roberts (UGA): Front through to double tuck to open, great pass. Double pike for her ending pass. Looks like a short routine, but she actually gets her connection bonus from those two passes and doesn’t necessarily need any more. 9.800

Hambrick (Ark): BHS LOSO, takes some steps back on the beam. Stays on, but this is just not her night. Beat jump to straddle 3/4. Sticks the gainer full dismount. 9.675

Baumann (UGA): RO 1.5 to front full, perfect first pass per usual. Double pike, almost looked like she wouldn’t get the second flip around, but find the landing. Solid routine! 9.925

Elswick (Ark): A little out of control on the acro series but holds onto it. Split jump to split 3/4 for her jumps. RO 1.5, stuck landing, tons of tears for this senior in her last routine in her home arena. 9.900

Hawthorne (UGA): Absolutely flawless double pike first pass. Front layout to Rudi to split jump for her last pass, just needs to clean up the timing on the last pass because the split jump traveled in the air. 9.900

Arkansas is still trailing after the third rotation solely due to that disastrous bars rotation. After the broadcast interview with Coach Wieber, it sounds like although they know what they need to do in the gym to prevent this from happening in the future, they are putting that behind them tonight will be going into their floor party with senior night emotion and tons of fun.

Pennese (Ark): FHS double full, under-rotates it and falls. RO 1.5 to front layout, really leans her chin forward on the layout. RO double tuck for the final pass and gets it. 9.100

Jones (Ark): Front double full for her starting pass, followed nicely with a RO 1.5 to front layout for her middle pass. Taking that deep breath before her last pass. Rudi to finish her night. Really good routine! 9.875

Schild (UGA): Front aerial to BHS BHS for her series. She looks very focused in this routine. Switch leap to split jump, excellent straight legs in those leaps. Side aerial to full twist dismount. 9.825

Sedlacek (Ark): Full in to start, perfect landing. The crowd is fired up watching that one! RO 1.5 to front layout. The third one we have seen so far in this Arkansas lineup (we have seen three routines.) Double tuck last pass, I don’t remember seeing any major deductions. 9.875

Nguyen (UGA): Onodi to BHS, gorgeous routine. Love that acro series. Side aerial to back full dismount, out of control on that landing. This is a much better Georgia beam rotation than prior weeks! 9.825

Hambrick (Ark): Double tuck, finishes the second flip with her chest straight up and down. RO 1.5 to back layout to straight jump, super fun pass. Double pike, lovely routine for the senior. What a funky routine! Love it! 9.925

Lovett (Ark): I am thoroughly impressed with Arkansas’ music and choreography this season. Double layout, gigantic as usual. She takes the double tuck straight up and finds the landing. Front layout to front full last pass, great routine. 9.875

Baumann (UGA): Side aerial to LOSO, solid connection. Beat jump through to switch side for her leaps. RO 1.5, hop forward. The routine was so clean up until that dismount. 9.850

Shaffer (Ark): Double pike to open, very pretty. She has great lines and choreo in this routine! last pass for her is a double tuck, and she finds the landing! After 6 years as a Razorback, her time in Barnhill has officially come to an end. 9.825

Georgia truly powered through the emotion of Arkansas’ senior night as they pull out the win. They finish with a 196.975, just 0.25 away from reaching the highly coveted 197.000 score that they haven’t been able to reach yet this season. As for both teams, a theme I noticed was the freshmen leadership after some struggles shown from the seniors. The freshmen classes really stepped up to show that even if they are young, they are ready to contribute to their team, even if some of their seniors are 6th years. Great night full of lessons and growth from both teams.

That is all for me tonight! So long my friends, farewell, goodbye!