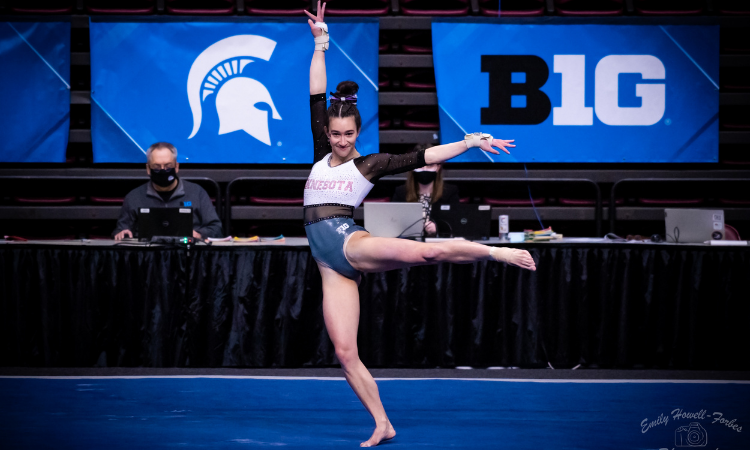 We’ve somehow already made it to Big Fives. What?!

Quick refresher: The Big Ten Championship is seeded by win/loss. Each of the 10 teams in the conference competes once against each of the other nine teams in official conference play. Five of those nine meetings are head-to-head duals, while the other four happen here, at Big Fives. The top four teams by record will be seeded into the night session of the conference meet, while the other six teams will land in the afternoon. (We think; there’s been no official word on how many teams will be in each session yet.)

As things stand going in, it seems likely that Minnesota and Michigan State from this session will join Michigan and Iowa from yesterday’s Big Five in the conference night session, but nothing will be set in stone until after the final head-to-head duals next week.

Michigan State, Nebraska and Rutgers come into this one on a surge. All three teams have been excellent in recent weeks and will look to keep building that momentum as we approach Big Tens. Minnesota had a tough meet last Sunday, on the back of a double and at its third meet in eight days. The Gophers will be looking to rebound here and reassert themselves as Michigan’s competition for the conference title. Penn State has been pretty consistently decent, but will want to replicate its lone 196 number of the season from late January here, to enter one more strong road number before NQS hits on Monday.

Speaking of NQS, it’s important for Minnesota to not just win the session for seeding purposes, but also to put up a mid-197 for NQS reasons. It so far only has one usable away number, and that’s a 197.125. It needs a statement away meet.

Hi folks, if you’re joining us, just a heads up that MSU Tweeted that first vault won’t be until about 7:21. Warmups ended on the hour, the teams are currently changing and then we have to do march in and play all five intro videos. Welcome to the Big Ten.

If you’re tuned into Flo, there is a stream for each event. When action gets underway we should get a quad box called Flozone, although it was hit and miss last night.

Well. 7:21 was optimistic. We’ve arrived at that time, and we’re only up to the second intro video. Go grab a beer! A wine! A water (look at you go)! A hot chocolate!

Sounds like a pretty solid crowd, there are definitely a lot of Gopher fans in the house.

Flozone isn’t up yet, I’m hopping streams and will get as much as I can.

Newman (RU): Double pike, moved the front foot a tiny bit. Double tuck, better control there. Switch side Popa split full was clean. REALLY pulled the lay at the end of the combo pass in, low and archy.

Curtis (UNL): Triple series, little wobble, great for her, she missed a lot of those in the one touch. Switch to split, clean and a little smile, she’s through the problem stuff. RO 3/2, true stick.

Pagliaro (RU): Caught some clean jumps in the background.

Davis (UNL): Check on her full turn. I’m just hopping in in the end of her routine here. Side aerial full, true stick.

Huang (RU): FHS 2/1, no deductions on that landing. FHS rudi to HUGE loso, she gets so much air on it. Switch side wolf 1/1, little overrotated on the former. FHS rudi, chest a bit low and has to lunge forward.

Well well well. Everyone is over 49! What a great rotation. The Bridgens mistake held PSU back a bit from its potential. Nebraska will be THRILLED with that beam showing, not easy to start there. MSU is used to higher numbers on vault, so they’ll have some work to do moving forward.

Good news is I got a quad box going, bad news is now everything is blurry and laggy, love that for me.

Romagnano (PSU): BHs lobhs loso, feet and knees on all three. Touches the beam on her leaps, that’s .3 plus the leg up. Low chest and hop on dismount.

Remlinger (Minn): Full-in, hoppy out of it into the lunge.Clean leaps. Much better on her combo pass. Double tuck, good again there.

Bridgens (PSU): Time to come back from that fall for her.

Well, Flo just kicked me out, so I’ll work on that! Sorry folks! Missing the last beam!

I’m back but no sound, caught the end of Loper floor looking strong.

Hooten (Minn): True stick on the full-in. BIG switch side popa. FHs front 1/1 front pike, does lunge but it’s controlled. Double tuck, again a true stick. I mean. Not much to take there. Better than the 9.975 last week tbh.

Okay now we’re cooking. The Gophers have clearly already forgotten about the tough meet last week, floor was excellent. MSU had some hoppy things on landings, podium seems to be impacting them more than other teams so far. PSU’s struggles continue, with a tough 48.300 rotation. It’s going to be a readjustment bye for the Nittany Lions who have half a meet to bring it back.

Clara Colombo is absolutely having a blast dancing in front of the floor cam.

Grotenhuis (Minn): Yfull, small hop to the side.

Bars camera is fully frozen, my apologies to Rutgers!

Zieden-WEbber (RU): Tkatchev, good. Clean bail. I think she hopped on the dismount.

Loper (Minn): Y1.5, knees, and she just underdoes it and puts a hand down.

Schulte (MSU): Swtich to switch half, leg up and falls.

Kuenemann (UNL): BIG double tuck, some bounciness in the lunge. Clean combo pass. Little off balance on her jumps. Knees on the combo pass.

That Loper fall really held back the Gopher vault rotation, as did some hops. Nebraska only trailing them by .075 is the story at the moment. Keep in mind Minnesota ends on beam, the event that gave it. so much trouble last week. Michigan State and Rutgers are rolling right along and are about where they want to be at this point.

Spence (UNL): Yfull, piked down and a hop.

Zannella (RU): Short of 180 and a check on her switch ring. Check on jumps, has to repeat.

Well. Flozone came on in the middle of Salcedo/Huang and kicked me out of my stream so I missed some of that. Oh, we’ve had commentators this whole time?! who knew?!

Rutgers is done. A mid-195 is a solid result, but we’ll have to wait and see how it holds up. Minnesota is a little funky tonight, but it’s nothing horrendous. Beam is the test as always, though. So far Nebraska is the surprise of the night, sailing through.

Tyson (Minn): Wobble on her split to double stag. Side aerial 1/1, off balance but didn’t move her feet.

Harkness (MSU): Good double tuck. Has to pull her combo pass around.

Bridgens (PSU): Yfull, great in the air, I think a small hop, Ralph Rosso was a bit in the way.

Ramler (Minn): Big pressure on her now. Bhs loso, solid. Front aerial to beat, no issues. She’s on. Beat to ring, lovely, big smile. Side aerial 1/1, stuck. Bout as good as she can do it.

Well that’ll do it folks! What a finish for the Spartans. Beam continues to rankle Minnesota. Nebraska will be especially thrilled with a stellar night, and Penn State will likewise be very happy with the 196.