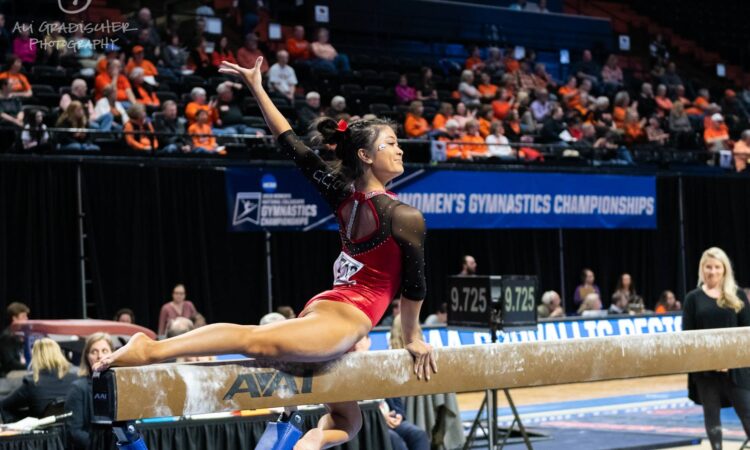 MRGC duals are always exciting, but this one is particularly close. Utah State beam has been fantastic this year, which could lead to some late-stage drama in a home meet. Meanwhile, Southern Utah has been using a squad of almost exclusively veterans who have performed fairly evenly across events but have room to grow particularly on vault and floor. Home floor advantage also tends to be substantial in the MRGC, which might tip the scales as well.

Vultaggio (SUU): Very stretched FTY, doesn’t quite get her feet under her and takes a small hop forward. 9.8

Gutierrez (USU): Maloney to bail, feet a little soft, and leg separation on the double layout. Looks a little deep with a step out. 9.775

Alfaro (USU): One of my favorite FTYs, great with just a slight shuffle in place. 9.9, as she should.

They’re playing that ABCDEFU song from TikTok. Hopefully they don’t scandalize anyone in the audience.

Jackson (USU): Blind to Jaeger, just a little too far and brushes the bar with her fingers on the way down. Got it on the second try. 9.15

Kho (SUU): One and a half and just a small step back! Slightly lock-legged landing, definitely saw her absorb force of the landing, but she stayed on top of it well. 9.9

Barney (SUU): FTY, piked down hard and chest a little low but stuck-ish. 9.8

Fishwick (USU): Maloney to bail, zero leg separation through the entire combo, blind to double front with a quick step back. 9.85

That’s a Thunderbird season high on vault, with great results from both of the 10.0 SV vaults plus Alfaro delivering like she’s done a million times.

Smith (SUU): Toe on to Maloney-Pak, leg separation on the way back down, double layout with a quick hop back. 9.825

Schwartze (SUU): Piked Jaeger, great bail. She has great toe point but you do catch the occasional flicker of loose feet, really minor though. Blind full with a slightly soft back to double back, hop forward. 9.85

Nipp (SUU): Blind to Jaeger, quite a close catch but casts out fine, bail is solid. Double layout stuck. 9.85

Brooks (USU): Interesting run, she doesn’t seem to develop a ton of speed from it. Solid FTY though with a step back. 9.85

Bentley (SUU): Slightly short on the first handstand, very close catch on her Ray but survives the overshoot connection. Double layout good with another stick. 9.825

Wells (USU): Great FTY, stuck or something pretty close to it. Replay shows the TINIEST shuffle back, we’re talking millimeters. 9.9

Murakami (SUU): I spent years wishing for her to move later in the lineup and now she’s here she knows exactly what to do. Jaeger to overshoot great, ultra precise handstands, FTDB stuck. Chest maybe a little low but that’s really all I saw there. 9.975 GO OFFFFFFFF. That’s the program record.

Jackson (USU): Yurchenko layout, hop back. Not sure if that’s what was planned. 9.575

Arnold (USU): Two and a half to front tuck, great. Slightly underrotated double back but negotiates into the lunge well. 9.9

Smith (SUU): Round off LOSO, leg-up check. Cat leap tour jete half, misses the split and a check. Looked off from the takeoff. Full turn, beat jump, one and a half twist stuck on her toes. 9.775

Vultaggio (SUU): BHS LOSO LOSO with an extra step. Switch to split is good, full turn with a slight adjustment. One and a half twist with a hop forward. 9.85

Brown (USU): Front through double back, a little cowboyed but well controlled. Front full front pike comes in low with a step back. Switch side Popa underrotated, piked backspin which is just such a confusing skill, good double pike.

Wells (USU): Good double pike, maybe a slight front foot shift, tour jete half Popa Popa super precise which is saying a lot for a leap pass with so much rotation. One and a half through double full a little underrotated, step forward, Rudi overcooked with a long lunge. 9.825

Nipp (SUU): Front aerial to split, arm movement in between though I doubt these judges are in the mood to take CV. BHS LOSO, pulls the front foot back slightly. Full turn, great leaps, gainer full stuck. 9.825

Clark (USU): Double layout, slightly soft knees and a long lunge. Leaps are MASSIVE, overrotated her Popa by like 90 degrees, two and a half punch front is great. 9.925

Schwartze (SUU): BHS LOSO good, full turn with an arm swing. Beat to LOSO, check. Split to sheep. Side aerial tuck back full travels like a yard to the side. 9.775

Thunderbirds hang onto the lead against a surging Utah State but it’ll only get tougher, since the Aggies’ best event this year is beam. Home floor can be great for SUU but this is far from over.

Smith (SUU): Whip double back is great. Tour jete half wolf full wolf full Shush. Great control on her Rudi. Getting a ten chant from the crowd, while that’s not likely I really do get the impulse because there was not a whole ton wrong with that. 9.875

McCright (USU): BHS LOSO slightly off line but gets it on with her arms. Beat to tuck full, side aerial to split fairly slow but clean. Side aerial back full stuck. 9.85

McClain (SUU): Great double pike, one and a half front lay very clean. Switch half wolf full, great double back. Momentum now for the Thunderbirds, energy is high. 9.925

Brooks (USU): Front aerial, slight adjustment, BHS BHS great. Full turn overturned, switch to Korbut is lovely. Hitch kick side aerial back full stuck with one foot substantially in front of the other. 9.875

Schwartze (SUU): Front double full controlled decently well, switch to tour jete half wolf full a touch underrotated. The crowd engagement these floor routines get is bananas. Rudi to LOSO, looked like the Rudi was a little overcooked and then she did the LOSO on top of herself, but she lunged out fine. 9.875

Sullivan (USU): Front aerial, arm swing, back pike. Connections have been generous today so it should be fine. Switch back tuck, one and a half twist with legs apart but stuck. 9.875

That’s a Utah State program record tie! It’s about time with how great Aggie recruiting has been and how hot the beam team has been over the last few weeks. 196.975 is a frustrating score for anyone, but it’s a big step forward for Southern Utah. Now the job is to start getting 196+ numbers on the road as well. 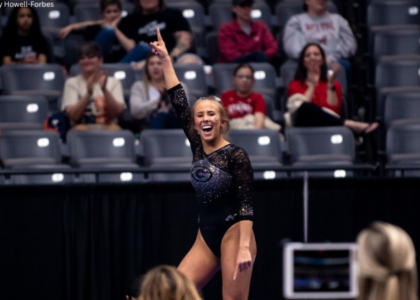