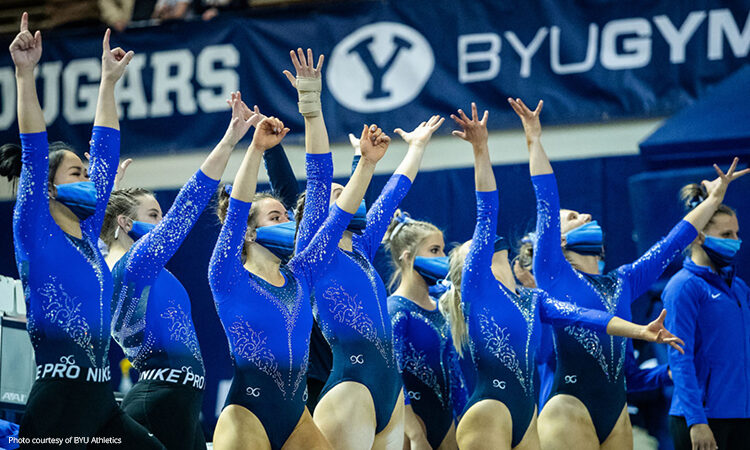 Happy Friday night MRGC dual meet time! The parity between the teams in the conference is insane right now and I hope you join me for the fun!

Utah State makes the short drive to Provo for BYU’s home opener. The Aggies have exceeded expectations so far this season, highlighted by freshman Brie Clark, who hasn’t scored below 9.9 on floor thus far. Last week, the Aggies outscored both Arizona and Stanford at Arizona after the team’s original meet with Boise State was cancelled due to COVID protocols within the Broncos’ program. Rebecca Wells also returned to competition last week after missing the previous meet due to COVID protocols.

BYU is coming off a close matchup at Southern Utah where the Cougars were edged out by the Thunderbirds by just 0.025. The Cougars have improved their team score each meet thus far; watch to see if the trend continues. Floor left much to be desired last week score-wise compared to typical BYU floor standards, however the Cougars rebounded for a solid beam performance. Sadie Miner-Van Tassell competed all around for the second meet in a row and the second time in her career and put up another 39-plus score. A little-known highlight of the meet was Allix Mason’s bars debut—she didn’t get a high score due to a final arched handstand, but her form and technique is top-notch and worth watching for.

Our favorite free stream/TV network combo BYUtv has this meet and stats can be found here.

Mason (BYU): yfull, nice distance, too much power and a good-sized hop back. 9.75

Brooks (USU): no, Spencer, this is not Maia Fishwick. good straddled tkatchev connected to bail. dlo some leg sep, stuck. 9.9

Fishwick (USU): great first hs; Maloney to bail solid; nice final hs; stuck double front! Nice job from the end of this rotation to pick up their teammate and not count a fall. 9.925

We’ve got a close one after 1, folks! It wasn’t a perfect vault rotation for BYU, but it was good enough for a 49+ score and the Cougars are in a good place moving forward on the event. Utah State had a couple uncharacteristic mistakes; Sullivan’s fall means the Aggies are counting Wells’ “I almost fell standing on the low bar” 9.675 routine. The highlight for the Aggies was clearly those last two routines that went 9.9+.

Brown (USU): yfull, clean in air but pikes down, good landing though. 9.8

Beeston (BYU): great first hs; good gienger to bail; arches over on last hs, bends legs and saves it, but that’ll be a sizable deduction. dlo with a shuffle back. 9.55

I guess USU is scratching Jackson on vault.

BYU widened the gap ever-so-slightly, but we’ve still got a close one. The Cougars were aggressive on bars, and it paid off minus the one overarched handstand. Like with Utah State, the last 2 routines were the highlights, and Mason showed her potential again. Utah State wasn’t quite there on vault, but it is exactly where it needs to be for this time of the year. The Aggies went over 49 while scratching the sixth vaulter which is also impressive.

Guard Young: “one girl bent in half and somehow saved it.” Yes. Correct.

Abbey Miner Alder spotting in the crowd! It’s alumni night at BYU and obviously her sister is still competing for the Cougars also.

Toomey (USU): Uma Thurman music. front double full to open, well controlled. solid leaps; ro 1.5 to pike, she was supposed to do a lay full, but completely missed the punch. Kudos to her for keeping it on her feet, but that could be a SV issue also. 9.475

Wells (USU): nice double pike; leaps good; ro 1.5 step-out through to a double full. Cheerleading-esque. Clean Rudi with a hop up to lunge. 9.775

Clark (USU): this might just be the routine of the night! huge DLO to open; her leaps show the same power as her tumbling, and good positions too; sky high straddle jump; back 2.5 to front punch, nice. her front tuck goes so much higher than the 2.5! 9.925

Re: Eve Jackson vault. Amy Smith says they scratched her since they had 5 good vaults and she warmed up a little wonky. Utah State had some weird little floor things, and Toomey’s mistake didn’t help anything. Brie Clark continues to highlight that rotation!

McCright (USU): bhs loso, thought she had it but then bends at hips; she’s doing really good at working through this routine, even when she’s slightly off. Hits dismount. Not perfect, but a hit. 9.75

Sullivan (USU): front aerial back pike, good; switch leap back tuck secure; ro 1.5 step back. Another good one for her. 9.775

Miner-Van Tassell (BYU): huge double tuck to open, does a hop back in lunge; that’s watered down for her—she usually does a DLO but is playing it safe as she returns from “illness”; better control on double pike; solid leaps; ro 1.5 front full good. 9.825 LOL OK JUDGES.

Respectable totals for both teams, and USU will certainly take a mid-196 road score. Floor judges went a little cracky towards the end, but it was a good meet regardless and the score probably just about reflects the total as well as the separation between the teams. Shoutout to Brie Clark for getting her first career 9.9 on beam.

Miner-Van Tassell says competing AA was “a long time coming” and “was supposed to happen years ago”. She’s struggled with injuries in the past.