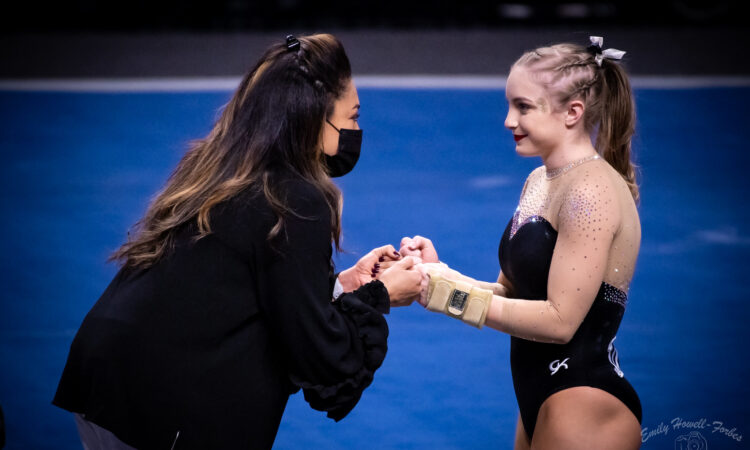 What an exciting Saturday night contest! We get to see ranking neighbors and conference foes do battle in Jenison. To top it off, Linda Zivat, who transferred from Michigan State to Iowa, is competing against her old team. This should be a blast.

These two teams seem likely—with Ohio State—to fight for a Big Tens night session spot. This early conference test could tell us a lot about what we’ll see come March. The Spartans’ Skyla Schulte, Gabi Stephen and Delanie Harkness are strong all arounders who could propel Michigan State past Iowa—a team led by star specialists like Clair Kaji, JerQuavia Henderson and Lauren Guerin—on a good day. This meet will be especially important in the first half, and especially exciting in the second. Both teams are thrilling on beam and floor, while vault and bars are a pace weaker. Whoever leads after two will have the advantage. Iowa has and edge on vault, since Zivat has the only 10.0 start in this one, while the Spartans have a leg (grip?) up on bars with strong routines from Harkness and Jori Jackard.

Today has been a true delight in the Big Ten so far. All of Maryland, Rutgers, Penn State and Ohio State had great outings. Let’s keep the good vibes going, shall we?!

The BTN+ countdown clock says we’re about one minute out, but I’ll believe it when I see it.

Lineups lineups lineups. No Adeline Kenlin for Iowa tonight, that’s a tough four routines to miss! Should affect beam especially, where Marissa Rojas is in. We’ll see Rojas on floor, as well. Nyah Smith is back in the mix for the Spartans, she’s on vault tonight.

We are now *checks watch* 15 past the hour so this thing should get rolling any second. I say should because I have seen some things with good ‘ole BTN+ in the past. If you’ve been around here awhile, you know.

Greenwald (Iowa): Cut in to her hopping on her double tuck dismount. 9.75

Henderson (Iowa): Toe hand to Maloney, messy backswing, loose legs in her bail hand. Full-in, good landing. That was sloppy but she survived. 9.8

Both teams will be pleased, the toughest event for each is out of the way. This is right where Iowa wanted to be at this point. MSU really was injected with energy after that Stephen score came in. The post-vault team huddle was LOUD. Moving into the next rotation, Iowa wants to minimize hops and MSU will be looking to hit early routines so that the heavy hitters later on in the lineup are pressure-free.

Stephen (MSU): Toe hand to Maloney, sloppy back swing. Toe hand to bail hand, some looseness in her legs, just not quite glued. Blind full double tuck .1 hop back. 9.7, just those messy legs.

Greenwald (Iowa): Yfull, hop, the camera work was TOUGH there for a moment, so we didn’t really see her in the air. Seemed to have some hip angle, yeah can see it on replay, pretty low amplitude wise too. 9.675

Schulte (MSU): True shaposh to bail hand, really clean throughout. Straight DLO, maybe a stick, she did hop her heels together and a picky judge will call it a hop. 9.925, I’m not mad at that.

Harkness (MSU): Toe hand to Gienger, bail hand, clean here. Half in half out stuck, some knee separation issues in the air. 9.925

MSU said this is our house. The early routines did exactly what they needed to to set the stage for that back half. There are a million good things to say about the Spartans’ form on bars: toes, legs, handstands. You can tell they’ve drilled details and it’s paying off. Iowa put up exactly the vault rotation it wanted to, and the Hawkeyes are in the position they want to be going into their best piece in floor. The party really starts now in this one.

MSU has a sideline reporter coming to us live every rotation break. He’s young, this is clearly a big deal for him, and he’s doing a great job. Thank you, MSU, for treating this BTN+ production as a serious deal. We see you, we appreciate you, and sideline reporter Zack(h?), you’re great!

Schulte, who is a freshman, really takes control in team huddles. She reads very much as a leader. You love to see it.

Harkness (MSU): Bhs loso, some soft knees and bent arms in the bhs, both small things. Pretty side aerial to switch, straddle 1/4, broke the connection between the leaps ever so little. Cat side aerial tuck 1/1, good start! 9.7

Killian (Iowa): Little shy on the 3/1, but a good landing chest-wise. FHs front 1/1 front pike, bit on her heels. Solid on her switch side popa, couldn’t see her feet though. Double tuck, slid her front foot back in the lunge. 9.825

Rojas (Iowa): LION KING MUSIC ARE YOU KIDDING ME. Front through double tuck, good landing but couldn’t see her feet, maybe slid back a touch. Leap series was clean. Low and short double pike, has to lunge forward, but it wasn’t wildly out of control. Good for her floor debut!

Stephen (MSU): She has a calm beam presence. Front aerial to two feet, love that so much. Bhs loso, offline and she fell, hit the beam pretty hard on her thighs, also some bent knees in both skills. Jumps were clean. RO 2/1, small step. 9.075

Vance (Iowa): Seems to be in for Greenwald? Hmm. We’ll see if there are other lineup changes. FHS 2/1, clean landing, some leg sep in the air. RO 3/2 punch front, low on that punch, the tuck seemed like a cover for what should’ve been a layout. Switch half to two wolf fulls, imprecise rotation and some shape issues on the wolf. FHS rudi, hop to the side and low chest.

Mitchell (MSU): Little bit of pressure now, but Mitchell is a pro. Pretty pretty work, as she’s known for. Bhs bhs loso, chest down balance check. Front aerial. Split to straddle 1/4 was good. She’s so calm. RO 3/2, deep squat and a hop back. 9.55

Schulte (MSU): Switch to switch half, wow, not many gymnasts can do a beam switch side that well! Bhs loso, big step back but stays on the beam. RO double tuck, medium hop back. 9.725

Henderson (Iowa): Full-in, so high, she did bounce back a bit in her lunge. Switch side popa straddle, great oversplits. Front through double tuck, stuck cold, no lunge needed. Really strong! 9.9

Garcia (MSU): Some pressure is on following a few mistakes. Meanwhile she’s dancing on the beam like nothing is wrong. Bhs loso, no deductions. She makes beam tumbling pretty. Front aerial to split, great. Switch to split, good oversplits. Side aerial layout 1/1 stuck cold. I have no words. Truly gorgeous. 9.9, maybe just some pike down in her dismount.

Guerin (Iowa): Full-in, lifted her front heel in the lunge, but kept her toes down. Switch side popa straddle, HUGE splits. This is vintage Guerin so far. Front through double tuck, great controlled lunge. 9.95, just that first lunge.

The Hawkeyes made a statement! MSU is strong on floor, and Iowa has had its beam demons like any team, so this is still anyone’s meet. What a treat this one has been. Great gymnastics on both sides.

Gilchrist (Iowa): Side aerial bhs, off from the start of the bhs, falls. Some low front leg on her leaps. Hitch kick to side somi, good. gainer pike, fights and holds a stick. 9.025

Nick (Iowa): Bhs loso, knees on both and an arm swing check. Greenwald is in the background with ice on her ankle, definitely injured to some degree. Leap connection was a little tight, not quite 180. RO 3/2, deep squat and a hop. 9.7

Mitchell (MSU): Double tuck, big slide back, might have stepped OOB, couldn’t quite see her back foot. RO 3/2 front lay, arched it down and landed on her heels, bit of a slide. Switch side popa to double stag, clean. Double pike, low and lands deep and short, stays on her feet. 9.7, seems she stayed in!

Stephen (MSU): The wrong music started. It seemed to startle her for a second, then she restarted. There we go. FHS 2/1 front tuck, little low and far on the tuck, but MAN that 2/1 is clean. Very cool front toss to one knee in her choreo. Good leaps. Double pike, hops into the lunge. This routine is great for her, she performs it so well. Great comeback form that beam fall. 9.875

Vance (Iowa): Bhs loso, soft knees but excellent landing. Side aerial to two feet, good. Split to straddle 3/4, dropped her chest a smidge, .1 off probably. Side aerial tuck 1/1, tiny foot adjustment, could read as a stick. 9.825

Harkness (MSU): Full-in, doesn’t quite pull it enough and has to lunge forward. Mike Rowe is such an underrated choreographer, these sets are great! Strong leaps. Front lay to rudi, misses the punch a touch and has some sloppy legs in the twist, but pulls it around. 9.85

Rojas (Iowa): So much pressure for her beam debut this year! Bhs loso, excellent. She looks calm for someone in such a pressure-packed spot. Swtich switch is clean. Front tuck to beat, slight adjustment on the tuck landing, but covered well. Gainer full stuck. WOW she really proved herself tonight. Big hugs from the whole team. 9.925!!! What a story.

Schulte (MSU): And it all comes down to this. Full-in, little messy in the air and hoppy in the lunge. Clean on her jumps if a little imprecise with her feet. Front through to double tuck, tries too hard for the stick and hops forward.

WOW we have to wait for scores on this one!

9.825 for Schulte. That won’t do it! Iowa steals a nail biter in East Lansing!

Wow. Wow. Wow. Stunning gymnastics from both teams. Beam bit both a little, and Iowa had just a touch more juice to take this one. Do not sleep on either of these teams.