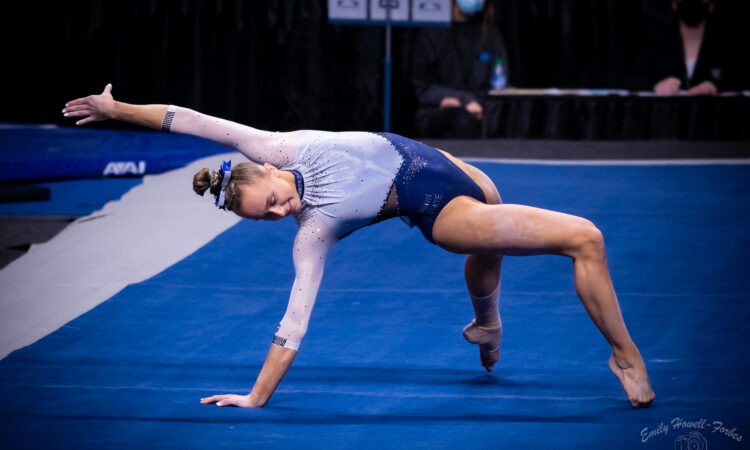 Even down one team, this halfhearted attempt at a State of Pennsylvania meet could be really interesting. Penn State has some fantastic freshmen, including Latvian elite Elina Vihrova and forward acro specialist Bella Salcedo. Penn, like the other GEC teams, was not allowed to compete in 2021 (read: Don’t panic if today isn’t the best) but has a monstrously talented group of underclassmen. It’s hard to tell how high the Quakers can go, but their program record of 195.075 can and should be beaten this season. Temple is a great team with an axe to grind: After reaching regionals for the first time in decades in 2021, the Owls were forced to withdraw due to COVID. They stand a very good chance of making it back to regionals (despite not being picked to do so by the WCGA coaches’ poll), but it’s a long road that starts at home in Philadelphia.

Bonsall (PSU): Double back good, clean combo pass, we cut away. Heard she fell on the third pass but we didn’t see it. 8.925

Barely picked out a hit in the background from Isabel Song at Penn.

Roland (TU): Huge full, her usual, touch of pike late and a medium hop back.

Johanson (PSU): Following a fall as a freshman, no pressure. Cut in partway through for a good double back.

Edwards (TU): Soft knees on the FTY with a medium hop.

Reistano (Penn): Half turn to Deltchev, slightly twisty catch and can’t swing out of it, has to recast. Double layout really good, fights a bit for the stick but gets it done.

Rushlow (PSU): Stepped out on her second pass.

M. Marr (Penn): Maloney to bail, holy… Only got one wrist on the bar and collapses over the top onto the floor holding something. FINISHING. Oh wow, I was sure she was hurt. Double layout with a small hop, wow. Hoping that arm holds up.

Kristen Kuhn stuck her dismount in the exhibition spot for Penn. She pretty much always does that.

Astarita (PSU): Double back and pulls the front foot back with her. Double pike with another shuffle-bounce thing.

EX Ayers (PSU): Out on her first pass but she’s absolutely Penn State’s best dancer so I’m just happy to get to watch her.

H. Stallings (TU): Great Ray, bit of flexed feet, bail with a touch of back arch. FTDB with great form and a step back. 9.65… bars judges are not in a good mood today.

Rushlow (PSU): Back on the table on her FTY, wraps around and lands a little on her heels with a big hop back. 9.375

Kuhn (Penn): Got iced by the judges. Wolf turn, BHS LOSO beautiful and steady. Remember that while she’s a sophomore this is still her college debut. Switch to straddle half, side aerial. pretty scale choreography. One and a half with a hop forward. Great debut!

Whalen (TU): Saw this in the tiny screen but hit.

Salcedo (PSU): HUGE Omelianchik. Massive. I’ve never seen an Omeli with actual block and she stumbled forward out of it but daaaang that’s potential.

Clark (TU): Goes for a Maloney and… doesn’t release? Crumples back onto the bar and jumps off. That’s probably just a nerves mistake.

Bridgens (PSU): One and a half made with a cross step! So happy to see her looking strong and fit.

Castrence (TU): Just saw the Tkachev but it sounds like a good hit for 9.80.

Yang (Penn): This routine just means so much to me. They did conference… 4/4. These judges have some sort of enemies to lovers fanfiction thing going on. BHS LOSO, little adjustment. Split to ring jump, another little adjustment, I blame the judges. Side aerial tuck full made.

M. Marr (Penn): She’s still okay and not injured phew! Made acro series, slightly iffy sheep jump. 1.5 dismount with a tiny hop. That’s a 6/6 beam rotation for the Quakers and the judges fought them EVERY step of the way.

Don’t worry about the scores, it’s a good meet, the judges just want everyone dead today. Penn State kicked major butt on bars and Penn hitting a full rotation of beam routines after two years away is huge.

Song (Penn): One and a half front lay, bound out. Double back, big step back.

Bridgens (PSU): Just got a blind full double back stuck.

Dorunda (TU): Triple series DRASTICALLY off line and the final LOSO doesn’t contact the beam at all. Punch front full with leg separation and a big hop.

S. Kenefick (Penn): Two and a half front tuck lands out of bounds and stumble backwards. Front double full twisted into the ground a little but controlled well.

Roland (TU): Choreographed arms prior to mounting the beam because she’s a legend duh. Full turn, slightly tentative, BHS LOSO with a soft back leg. Hitch kick, unsteady, dances backwards. Side aerial. Yeah, that was supposed to be connected but she made it on the second try. Slightly iffy splits. Stuck 1.5 dismount.

Penn State is really off to the races now. The other two definitely had some hiccups in that rotation but worked through it well.

Kraez (Penn): Huge FTY with a bounce. She’s worked a tuck 3/2 but I think this is a better scoring vault for now.

Romagnano (PSU): Grabs the beam on her triple series. Side aerial tuck back full.

DeBarberie (Penn): She spent a year away from the sport but her vaulting has looked amazing in preseason. That was a super full, very straight body position with a hop.

Salcedo (PSU): BHS LOSO, bit of knees and feet but well landed. Switch half with a leg up. Punch front full stuck! Good one.

Agarwala (Penn): Full on tuck off, that’s a 10.0 start and it was positively AIRY.

Penn State struggled to bring it home there on beam but everything up to there was great. Temple and Penn both have some positives, but the judges didn’t know quite what to do with their good routines. It’s a solid start with a lot of potential for all three of these teams but there’s also a lot more to do to settle in.