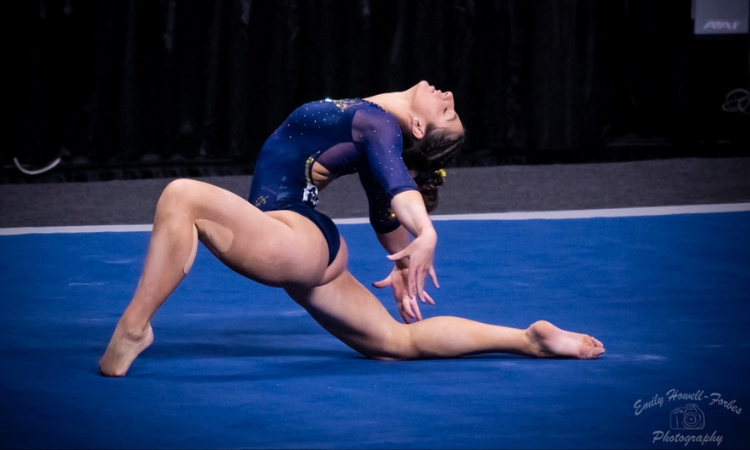 Is there a better way to start the 2022 NCAA gymnastics season than with the reigning champions? The Michigan Wolverines had a historic 2021 season that ended with a national title as they defeated Oklahoma, Utah and Florida in the national final. Michigan officially became the seventh team and first from the Big Ten to win a national championship in NCAA gymnastics history.

While Michigan triumphed, Georgia’s season ended with disappointment. The program was unable to compete at the SEC championship due to COVID-19 protocols and failed to advance to day three of regionals in its home arena. It was also the first time ever the Gymdogs had no gymnasts at nationals.

The team has not finished higher than seventh since head coach Courtney Kupets-Carter took the reins, and if Georgia’s First Look competition held on Dec. 11 was any indication for the 2022 season, 2022 will be another rough year.

Michigan will be competing without sophomore Carly Bauman this season due to a ruptured achilles tendon injury sustained during preseason. Bauman contributed on bars, beam and floor during the 2021 season. We’re also missing Nicoletta Koulos, who wasn’t at the intrasquad or in today’s projected lineups even though she seems healthy in training. For Georgia, Nhyla Bryant was spotted in a boot and scooter while Rachel Baumann is recovering from a sprained elbow.

Cashman (UGA): Tkachev with flexed feet, iffy KCH, bail with a bit of leg separation. Slight flexed feet on the double layout with a small step back. 9.725 is about right.

Wojcik (UM): One and a half high with a bit of leg separation on the table, medium hop forward. 9.85

Ward (UGA): Slight arch on the first KCH, shapey on the true Shap to very, very troublesome bail with major leg separation and soft elbows as she narrowly avoids collapsing onto the bar. Double layout good with a step. 9.225

Heiskell (UM): My favorite Michigan vault to watch, arms a little wide on the table and then wraps them in. Smaller hop than Wojcik. 9.9

Finnegan (UGA): Nice Ray! First really good skill this lineup has had. Minor leg separation on the Pak, the kind that NCAA judges are often willing to ignore, FTDB pretty but deep with a fake stick. 9.8

Morrison (UM): One and a half feels so easy for her, big hop forward but it’s very light and airy. 9.825

Schild (UGA): Toe on to Ray slightly labored with flexed feet, leg flicker on the bail but emphatic handstands, double layout piked throughout with a near-stick. 9.85

Brooks (UM): Flared 1.5, step back but it wasn’t substantially underrotated, just completed so quickly that she didn’t have time to orient herself to the ground. 9.9

De Jong (UGA): Toe on to Ray, for some reason it goes sideways and has absolutely zero turnover, makes a good faith effort to catch it but it was off from the start and she falls onto her knees. Great bail, double layout with a baby hop. 8.925

Roberts (UGA): Leg separation on the Maloney backswing but great bail. Pretty double layout with arms out in the second salto and a bounce in place. 9.825

EX Mulligan (UM): Just a full today with leg separation on the table and a small hop back.

Well… the readiness issues that we saw at Georgia’s First Look haven’t improved and the injury landscape is worse. Hard to see the endgame for this bars team beyond “hope that Nguyen’s ankle isn’t too bad.”

Michigan’s vault lineup is almost exactly the same as it was last year, which is a very good thing. No drama here.

Heiskell (UM): I object to her leading off here in the strongest terms, her routine is second-best to Wojcik. Anyway. Blind to Jaeger, Zamarippa’d a handstand and then gorgeous Pak, blind full double back stuck. 9.875 #robbed

Cashman (UGA): We saw that very briefly, crazy crashed full. Looks like she never made solid contact with the table but at least she’s safe. 8.75

Magee (UGA): I didn’t think she’d go for the one and a half but she did! A little deep with a side step but taking the risk and landing it in a pressure situation like that is great. 9.775

Morrison (UM): Gienger spectacular as usual, clear hip to bail, double layout a touch shapey with a hop back. 9.85

Wilson (UM): Blind super late to pike Jaeger, severe and obvious foot flexion and soft elbows on the catch, double layout with minimal height and a scoot. 9.925 for what. why.

Roberts (UGA): One and a half tucked…? I genuinely can’t tell if that was intentional. Near-stuck, though. 9.9

Wojcik (UM): Toe on to Deltchev to overshoot, spectacular, double layout kind of flung out but stuck. 9.95

Score ordering went out the window there but the general gist of this meet is clear, which is to say Michigan is much the same team it was last year (WHERE are the freshmen…) and Georgia is just not good vibes.

Morrison (UM): Some leg separation on the candle mount, BHS LOSO with an extra step and then a medium check. Cat leap to switch half to beat, pretty gainer pike with pointed toes and a baby hop. 9.775

Heiskell (UM): Cat leap side aerial, TINIEST adjustment. Switch switch is a composition change, BHS LOSO beautiful and very solid. Full turn, round off 1.5 likely stuck but her feet weren’t on screen so I can’t guarantee anything. 9.925

Magee (UGA): Pike full in, leg separation and a bit of a scoot into the lunge. Switch side Popa, little hop. One and a half to layout a little underrotated. Double pike underrotated. 9.7

Wilson (UM): Hitch kick, flexed feet. BHS LOSO, feet visible again. Straddle to split 3/4, weight on her heels and a check, double back with a step. 9.7

De Jong (UGA): Triple twist, minor bounce out. One and a half front lay is good! Footloose music suits her, she can pull off high energy and slightly silly. Double tuck, very underrotated and runs forward. 9.375

Brooks (UM): Triple series with a medium hip break, arrests it fast. Switch switch, it’s hard to tell splits from this angle but they looked borderline. Full turn, kickover front is high and emphatic. Double back, scurry back. 9.825

Guggino (UM): BHS LOSO looked a little off line to me but she didn’t have a problem. Split straddle 1/2, pretty. Her leaps are always nice. One and a half with a baby step forward. College beam debut and it went great, hopefully she’s here to stay. 9.825

Lukacs (UGA): Double pike, well rotated. Her endurance is holding up relative to the others. Leaps a little dodgy as usual, double tuck with a slight hop forward but nowhere near the issues others have had. 9.7

Wojcik (UM): Front aerial to beat, triple series with foot flicker but again it’s on the level that NCAA judges pretend they don’t see, one and a half stuck DEAD. 9.95

EX Koulos (UM): Oh there you are. Wish you were in the bars lineup! She did have an offseason wrist injury, but I know she can do a bars routine because I watched her do it on the Instagram story literally yesterday. Back handspring, front aerial to one-hand FHS with a big check. Split to straddle 3/4 pretty, attitude turn. Dismount hop. That composition is… odd… but maybe once her wrist feels better she’ll do something different.

The Georgia stamina is such an issue. Michigan beam likely has some shuffling to do but it’s already a very good lineup for January.

Magee (UGA): Blanked the leap series but it was hit. Triple series slow and steady. Full turn and skips out of a check. One and a half with a big step to the side. 9.75

Finnegan (UGA): BHS LOSO, immediately no. Steady after that, one and a half twist with a bounce. It’s a pretty routine. 9.25

Heiskell (UM): Got the double Arabian! Leg separation but it’s NCAA tumbling, we don’t care about that sort of thing. One and a half front lay clean and lovely. Switch side wolf full very precise. Double pike, great lunge. That was fantastic.

Wojcik (UM): Double pike, landed well. Tour jete half to Popa. Double full front pike STUCK. Rudi to straddle. 9.9, I could have gone for more, the tumbling was so good today.

De Jong (UGA): Switch to split, I’m not sure if she made the first split but it could have been a TV issue. Good front aerial. BHS LOSO a little shaky, arrests it with her arms. Side aerial back full stuck. 9.85

Morrison (UM): Half in half out!!! Gorgeous. Front lay front full. Switch half wolf full. Double back, emphatic lunge. The landings are greaaaat. 9.875

Baumann (UGA): Side aerial LOSO, tentative but made. Full turn, switch switch side. Baby step back on the one and a half. 9.75

Schild (UGA): Pretty press handstand work, front aerial tentative with a leg up before the BHS BHS with another check. Not sure if that’s an acro series. Full turn. Switch split, side aerial back full with a step. 9.2, yeah, no acro series.

Wilson (UM): Full in, front full front lay. Double back. Great landings! Landings can get to her but today she made them all. 9.95 is only fair.

Jenna Mulligan in the ex.

Obviously a great, great start for Michigan with a high degree of physical and mental readiness. I have to do the “questions for the rest of the season” thing though, and my question is about the depth. Only seven gymnasts competing, Jenna Mulligan as the #7 routine on two events… We’re really going to have to pray for Koulos’ poor wrist or the margins will be very, VERY thin.

For Georgia, my only question about the rest of 2022 is how fast they can hire a new coaching staff. Too harsh? Eh. This team is so talented and can be so beautiful to watch but the mess at this point is just out of control.

READ THIS NEXT: The Flame Is Still Alive for Peter and Mary Jansson in New Roles at Arizona