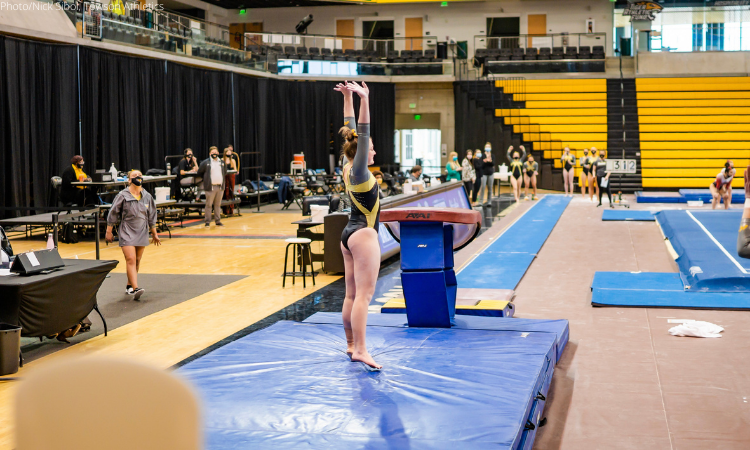 When Allison Zuhlke sprinted down the vault runway during Towson’s quad meet last February, she punched, flipped, twisted then landed to the cheers of her teammates. When her 9.800, she broke into a big smile, not because she was particularly proud of the number, but she had just made history.

The vault she landed, a front handspring onto the board into a Tsuk tucked full, had never been done before in NCAA gymnastics. And to understand the Zuhlke II, you first have to return to 2017 when Zuhlke, who recently transferred to Iowa, debuted the first iteration.

As she explains it, the idea of a new vault came up midseason. Zuhlke spent her entire optional career up to that point doing Yurchenkos. However, in the middle of the season she developed a mental block with the skill that resulted in her doing a round-off and completely going over the vault table.

One day she walked into practice and Rudnitski suggested a front handspring onto the board into a Tsukahara pike. Zuhlke was on board with the idea.

She didn’t have a lot of time to learn it, though. They started by doing pit drills before moving it to the actual vault. And they also decided to stick with just the pike in post-flight with the 2017 season well underway.

However, Zuhlke knew she needed a higher start value than what the vault was given—a 9.600—to be competitive in level 10 on the event. So a year after competing the pike she worked to upgrade, trying out adding a twist. While she did play around with a layout full at one point, Zuhlke and Rudnitski ultimately decided to stick with a tucked full, as it’s a less common skill. The vault is rated out of a 9.900 in level 10 but a 10.000 in college.

The process of creating a new skill doesn’t stop once it’s mastered. There’s a lot of administrative semantics that go on behind the scenes every time a gymnast goes to compete it. It’s a process Zuhlke learned a lot about in the early days of performing her vault.

Because the vault wasn’t officially in the Code of Points yet, during the meets that led up to level 10 nationals, Rudnitski would have to explain the skill to the judges at the event at each meet. They would then assign it a value and she would be set to compete. Not until she performed it successfully at nationals would it officially be named and added to the book.

While Zuhlke is of course the one to perform the vault for the first time, she doesn’t stop crediting her coach for its success.

“Vitali’s always concocting new ideas for everyone, so I’m not surprised at all. He came up with that,” she said.

While an eponymous skill in the Code of Points gives a gymnast huge bragging rights, it’s not what motivated Zuhlke to create hers and ultimately compete it. She found herself with an unfortunately timed mental block and needed to figure something out to be able to compete. However, other times, a gymnast wants to try something new.

Auburn junior Cassie Stevens doesn’t remember why she didn’t want to do a front handspring when constructing her level eight beam routine. 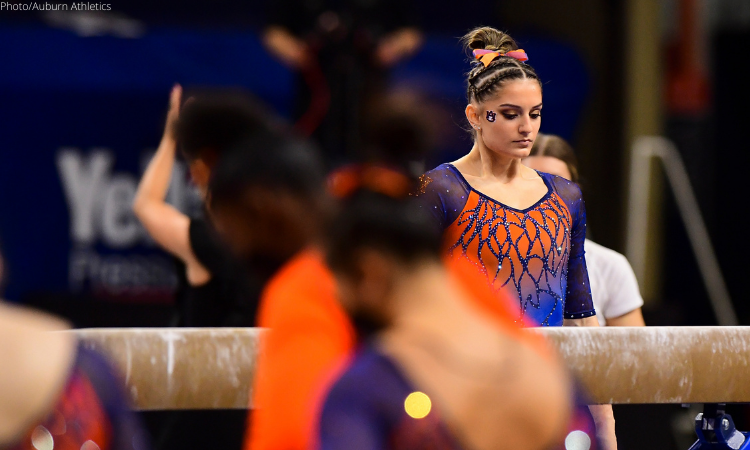 She competed the variation in level nine and stuck with it when she moved up to level 10. While training with another teammate over the summer, Stevens saw her practice a gainer front toss. Inspiration struck Stevens again and she attempted adding a gainer entry into her front aerial to knee. Confident with the skill, Stevens successfully performed the move that year at level 10 nationals, officially getting it named after her.

“Don’t limit yourself of what you’re able to do because then that’s probably all you’ll be able to do,” Stevens said. “If you shoot high, then you have a better chance of getting there.”

Like Zuhlke, Stevens’ coaches had to consult with the judges before she competed the skill, informing them it was a new skill and of its value. Eponymous skills in the USA Gymnastics club system need to be a “C” value to be named. She says she remembers an extra judge videotaping the balance beam routine to make sure she successfully completed the skill during her routine—another requirement to have a skill named and added to the Code of Points.

With so much similarity and cookie-cutter routines crafted to optimize scoring potential rather than creativity in gymnastics today, eponymous skills are an opportunity to break the mold.

“It’s cool to see new [skills] in gymnastics because a lot of girls do the same thing,” said Zuhlke, who would like to be a judge in the future.

She’s noticed the popularity of specific skills like Yurchenko fulls or Jaegers but emphasizes that it’s cool to see something new every once in a while.

“There’s going to be ups and downs,” Zuhlke said. “In the end, it adds more variety to the sport.”

READ THIS NEXT: One Year Later, Coaches and Athletes Continue to Strive for Diversity and Inclusion