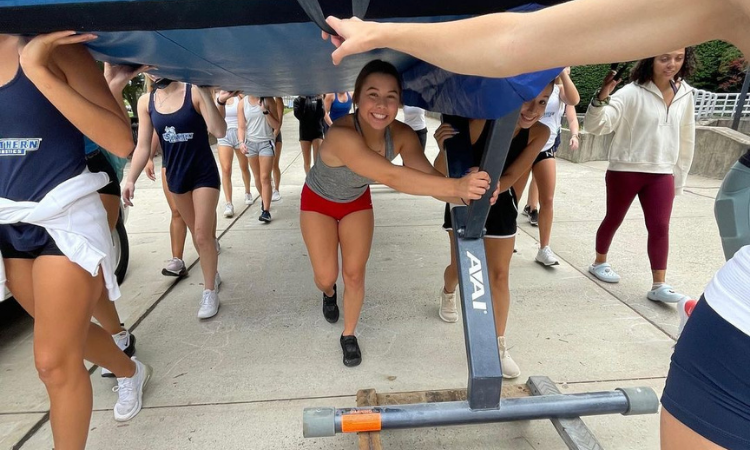 Much of Byron Knox’s gymnastic coaching career has been varied but consistently successful. Knox, who led Bridgeport’s gymnastics teams for 16 years, coached the team to six straight USAG national championship titles from 2009 to 2014 and 11 consecutive ECAC championships (12 overall). He was also named USAG head coach of the year four times and NCAA regional coach of the year six times.

Knox was ready to take the winning momentum to SCSU last year, but those plans came to a halt as COVID-19 protocols put any competition for the 2021 season on the back burner.

Although they weren’t competing, the Owls were still present and active in the gym, leveling up fitness and adding strength for specific apparatuses. Knox has also been building a robust roster of 38 gymnasts. Of the 38 gymnasts, 33 have never competed, and 23 are freshmen. He knows his team is a bit of an oddity, and he knows most coaches wouldn’t take on that large of a team.

“They see my roster, and they go, ‘There’s no way I would ever do that.’ Well, I have a different love. I have motivation. For me, it’s a little bit different. I love the challenge.”

While Knox realizes that most coaches are looking for gymnasts of high level, he also knows that there are only so many of those athletes to go around. Knox finds it profitable to develop those athletes who the more prominent Division I schools may not recruit but are motivated to learn new skills and become strong enough to compete.

Knox takes inspiration from some of his former gymnasts’ successes. Recently, three of his former athletes transferred to Temple after Bridgeport temporarily closed its program. Caitlin Gray and Julianna Roland were both in Temple’s lineup, contributing to the team’s great year in 2021. Hannah Barry also transferred but has not been in the lineup yet.

With 23 newcomers, he’s also building a team with whom he can develop trust and who will peak in the next couple of years.

Knox says it takes time for a team to get to develop trust, and a learning curve takes place. A coach can’t expedite the process, but he has a plan in place where he’s expecting to have a high level of success early on.

With a roster nearly the size of a football team, how can one coach and two assistants give quality attention and instruction with so many athletes?

Senior Hannah Stahlbrodt has undergone three coaching changes, a truncated 2020 season and a competition-less 2021 campaign. She has seen a lot in her three years at SCSU and is unfazed by the roster size. She trusts Knox and knows he has a plan.

“When he told us that he was getting 23 new freshmen for this year, we’re all a little bit shocked, but the saying is true—the more, the merrier,” Stahlbrodt said. “With all of us together, the atmosphere is so encouraging and positive.”

Stahlbrodt knows having such a big team will make it easier to take the specialists when the season begins.

There is no official manual for optimizing training for nearly 40 gymnasts, but Knox can easily publish a large binder of ideas.

Historically, SCSU has trained in two gyms. One is the Fieldhouse, and the other is Pelz.  Because their facilities are split into two gyms, the team has strategically divided training for each gym and set times for the different groups. The 23 freshmen practice in the morning, and sophomores through seniors practice in the afternoon.

Knox has worked with the administration to improve the facilities with the field house retrofitted to accommodate the influx of athletes. The SCSU alumni association has been very supportive, and they’ve been able to raise about $30,000, which is close to the team’s operating budget. In addition to retrofitting the field house, some funds have gone toward training aids and spotting belts. Still, Knox is philosophical about his budget and remains positive.

“[The team has] two scholarships. Thirty-seven kids out of state, one kid in-state, and we’re managing. We’re turning those peanuts into peanut butter. It’s going to spread it all around. Everybody loves peanut butter sandwiches.”

A former national team member and SCSU gymnast, Knox often incorporates aspects of men’s gymnastics in the team’s training. An example is the parallel bars, which the team uses for conditioning and sport-specific training. Conditioning on the apparatus helps with shoulder shrugs and supports. Weights are specifically used for gymnastics shapes.

In addition, a moving single bar is attached to the parallel bars for handstand training.

During beam training, they use a weighted bar behind their necks, extending their arms as if they’re walking on beam but with them on a line of the floor. By performing the basics with the bar, their beam skills seem effortless when higher up.

“As coaches, we use different tactics and are not necessarily techniques to get our athletes to respond and perform,” Knox said. “A lot of that stuff is a trade secret. I’ve had a lot of success with these tactics. I’m going to do that more at SCSU.”

Assistant coach Kelli Tereshko has been a gymnast under and an assistant coach with Knox at Bridgeport and SCSU. She’s observed that Knox doesn’t like pits because he believes people are just chucking skills and by extension, teaching themselves. Knox instead relies on spotting belts, believing the training aid creates more awareness, forcing a gymnast to be more plugged into the skill.

She recognizes his willingness to develop an athlete. While coaching, she’s seen Division I schools where many gymnasts already have releases or big dismounts on bars and 10.0 routines on every event.

“Byron will take someone that was level nine and maybe doesn’t have a 10.0 routine, but a year or two later—all of a sudden they have [one] and they’re competing just like all of the other people they graduated with,” Tereshko said. “He can always teach skills. I don’t feel a lot of teams necessarily teach new things.”

Even if a gymnast doesn’t make the lineups, Tereshko says the head coach allows everybody to perform in exhibition.

“That’s his big thing. Everyone should have an opportunity to be able to do college gymnastics.”

READ THIS NEXT: BYU Summer Season: A Leap Toward Year-Round Training 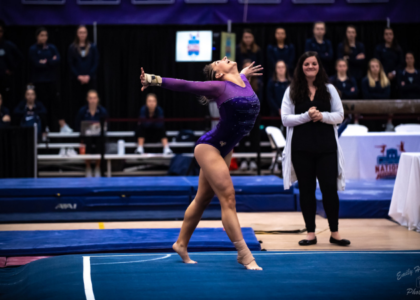