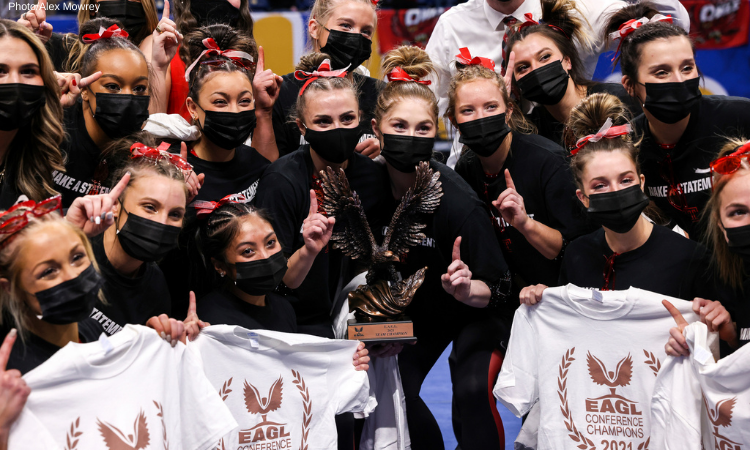 The two teams with the biggest jumps in the rankings were Towson and Temple, which moved up 20 spots and 17 spots, respectively. Both teams had record-breaking seasons in 2021 and both qualified to regionals for the first time in over 20 years. Another notable jump was from Boise State, which bounced back from a rough 2020 season to move up 16 spots in 2021.

Because of the COVID-19 pandemic and the potential of a shortened season in 2021, the NCAA change the way it calculated NQS, only averaging the top four scores (with at least two away) instead of the typical way NQS has been in the past. Because of this, it wasn’t fair to compare NQS from 2020 to that of 2021. That’s where average comes in. For some teams, the change in average gives a better picture.

Note: A few teams had meets where they did not have enough routines for a full team score. These scores were removed from the average for our purposes.

As seen in the graph above, generally an increase in average leads to an increase in ranking and vice versa. The most notable outlier on the graph is Centenary, which moved up 11 spots in the rankings despite its average going down 0.686. This is almost entirely due to so many teams opting out of the 2021 season. Because there were fewer teams, Centenary finished higher in the rankings, so the average gives a much better picture of its season overall.

The team with the largest change in average was Gustavus Adolphus, which went up by nearly one and a half points from 2020 to 2021. It is important to note that the Gusties only had four meets in 2021, but they had an excellent season overall despite the circumstances.

The two teams with the largest change in ranking, Towson and Temple, also had some of the largest changes in average, coming in at No. 2 and No. 4, respectively. Also improving its average significantly was Iowa, which improved its average by over a point despite only moving up six spots in the rankings.

Note: Temple made the switch from ECAC-I to EAGL for the 2021 season and is included in the EAGL averages.

The conference that had the largest increase in ranking was the MIC. This is helped out by the fact that many teams opted out of 2021, as every MIC team moved up in the rankings. However, the MIC also had the second highest increase in average, so the large ranking change is not as misleading as it might initially seem.

Other conferences with significant increases in ranking and average were the MRGC and the MAC. They were both tied for second in ranking difference, moving up seven spots on average. The MRGC had the largest improvement in average (+0.388) while the MAC came in third (+0.199).