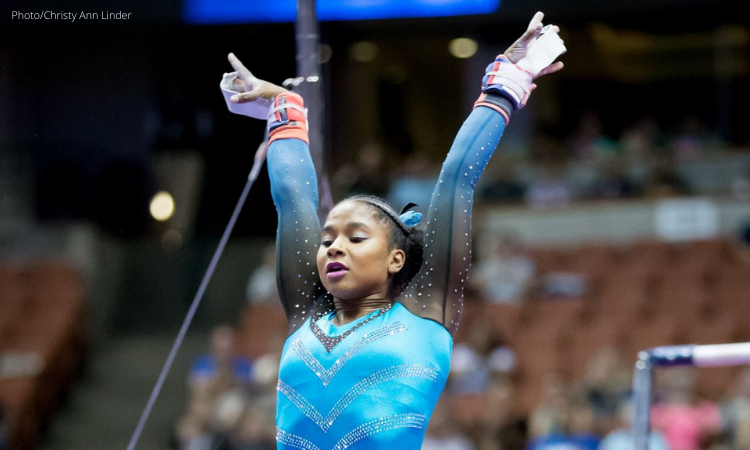 Nine incoming college freshmen will compete this weekend at the Olympic Trials, together with Simone Biles, MyKayla Skinner and seven other gymnasts in the classes of 2022 and 2023. The two-day competition will determine the Olympic team that will represent Team USA in Tokyo this summer.

Oregon State signee Jade Carey is the only gymnast to have already qualified to the Olympics through a nominative spot. She’s still expected to compete full difficulty at Trials, though.

Superstar Simone Biles is also a virtual lock for the Olympic team, but who are the other participants that are competing for a place in Tokyo?

UCLA has three commits: Jordan Chiles, who was third at the U.S. championships, Emma Malabuyo, who was fourth, and Emily Lee, who was 13th. Chiles had a breakthrough season this year, finishing in the top three in the all around at every meet she competed in. Barring catastrophe, she should be a lock for the Olympic team. It would be an incredible achievement for an athlete who turned senior in 2017 but never made a world team. Malabuyo overcame years of injuries to peak at exactly the right time at nationals. She’s unlikely to make the team, though she may be named an alternate or to the specialist spot. Plus, seeing her healthy is very good news for the Bruins. Lee seems out of contention, but her inspiring story has attracted a lot of media attention lately, including Deanna Hong’s latest documentary. Don’t miss it!

The other gymnast who seems a lock for the team is Auburn signee Sunisa Lee, who was second in the all around at nationals despite nursing an ankle/Achilles injury. Not only could Lee qualify to the all around final in Tokyo, but she’s one of the favorites to win Olympic gold on bars.

Florida has two commits in the class of 2021, as well as two commits in the class of 2022. Incoming freshmen Leanne Wong and Riley McCusker both stand a good chance at making the Olympic team. Wong could be the favorite to fill that much talked about fourth team spot if she hits all four events and especially floor at Trials. As for McCusker, it’s unclear whether she’s healthy enough to compete in the all around after being limited to bars at nationals. If she is, she could be in contention for the main team; if she’s not, she’s probably the favorite to be awarded the additional individual spot. Kayla DiCello, in the class of 2022, also has a chance at making the Olympic team. Similarly to Wong, her chances will increase if she can hit vault and floor, as the U.S. may need a gymnast with strong leg events in case Lee’s ankle injury flares up again. Shilese Jones, who is also expected to join the Gators for the 2023 season, showed up strong at nationals and had the best Yurchenko double twist in the field, but her all around readiness seems one step behind.

Utah is represented by two incoming freshmen: Grace McCallum and Kara Eaker. McCallum is also still in the running for the fourth Olympic spot, and her chances will come down to her performance at Trials. Eaker, who like McCallum competed at the world championships both in 2018 and 2019, hasn’t had a brilliant year so far, failing to stand out even on beam, her pet event. She could still be considered for the additional individual spot, though.

Former Ute Skinner is also in the mix. Her vault scores were impressive at nationals, but her other pet event, floor, as well as bars and beam, still needed improvement. Skinner, however, had a breakthrough performance at the Olympic Trials in 2016, too, so it’s too early to count her out.