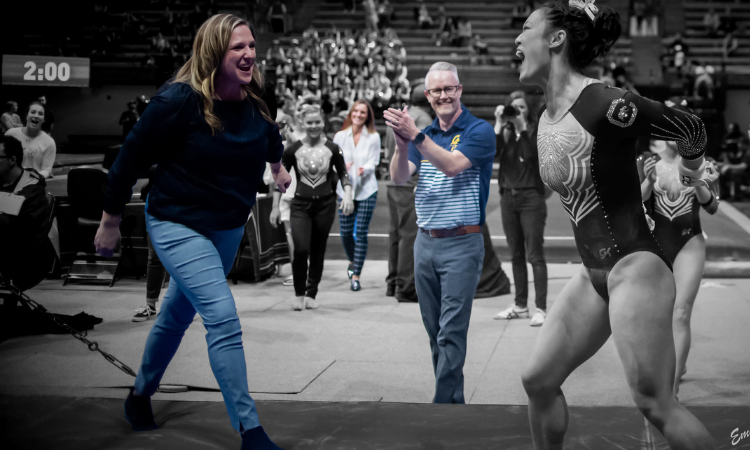 College Gym News is proud to announce its first annual end-of-season award recipients. Members of the CGN staff nominated individuals in six categories based on specified criteria. Then, the field was narrowed down and editors voted based on regular season performance only. You can find the categories, winners and remaining nominees below.

Gymnast of the Year

Criteria: Nominees shouldn’t just top the standings but have been a significant contributor throughout the season for their team. Nominees rarely had missteps and consistently produced top scores that made an impact. They stand out from their peers.

Florida junior Trinity Thomas competed all around in only six of the Gators’ nine regular season meets due to injury and COVID protocols. However, she made the most of her limited performances, hitting a season and career high 39.900 in the all around, earning three perfect 10s and scoring below 9.900 only eight times out of her 25 regular season performances (and only twice below 9.800). Thomas was a big reason why the Gators sat atop the rankings for the entirety of the 2021 regular season, and it was noticeable when she was out of the lineups.

Freshman of the Year

Criteria: Nominees must be a true freshman during the 2021 season. They are gymnasts who not only consistently produced top scores but made an impact on their own team and stand out from their peers.

There is little doubt LSU’s Haleigh Bryant is the best freshman in the country in 2021 thanks to her near-dominant performances all season long. While it may have taken her a bit to come into her own as an all arounder, her prowess on vault and floor in particular put her ahead of the pack. During the regular season, she scored below 9.900 just once on vault and even picked up a perfect 10. On floor, she fell below 9.900 only twice, coming close to perfection as well with a 9.975 in her very first meet. In the all around, she hit 39.600 three times and is poised to dominate for years to come.

Coaching Staff of the Year

Criteria: Nominees first and foremost coached their team to athletic success, whether that means a large improvement over past seasons or record breaking performances.

California had a record-breaking 2021 thanks to co-head coaches Justin Howell and Liz Crandall-Howell, and assistant coach Janelle McDonald. The Golden Bears tied the NCAA’s best-ever bars total with a 49.825. At that same meet, they also notched program records for team total (198.050) and beam (49.500). A week later, they scored a program record on floor with a 49.575. California’s stellar regular season ended at the Pac-12 championship, where it finished second to Utah for its highest finish ever.

Breakout Performer of the Year

Criteria: Nominees are juniors or seniors who were particularly successful in 2021 after not having competed, having only competed one or two events or having only received mediocre scores to start their careers. Nominees “came out of nowhere” on events they weren’t expected to contribute, started getting scores much higher than previous averages or finally added events you didn’t know they were even training.

While Addy De Jesus’ time at Nebraska might not have ended on the best of terms, the junior found a new home at Iowa State and excelled in her first year in Ames. She scored a perfect 10 on vault, the first of her career, Iowa State’s first since 2004 and only the team’s third on vault and fourth overall in program history. On top of all that, De Jesus performed phenomenally across all four events, notching a season high 39.600 in the all around and top marks of 9.925 on bars and beam and 9.950 on floor. Compared to her first two seasons in Lincoln, De Jesus increased her career highs on all four events and in the all around in 2021. And with at least one more year at Iowa State—if not two should she decide to use her extra eligibility—the Cyclones are set with a star gymnast and strong leadership for years to come.

Comeback Gymnast of the Year

Criteria: Nominees missed at least the majority of the 2020 season and didn’t just start competing again in 2021, but did so well, producing effective scores for their teams.

Iowa’s JerQuavia Henderson was a highly touted recruit when she joined the team for the 2020 season. However, an untimely Achilles injury saw her NCAA debut delayed a year. But it all worked out in the end, as the 2020 season was cut short and Henderson had ample time to heal without missing as many meets as she might have in a normal year. Then, in 2021 the sophomore started with a bang, becoming a reliable asset for the Hawkeyes on all four events, competing in the all around in seven regular season meets for a career high 39.3250. She tallied nine scores of 9.900 or higher, including a 9.975 on floor and a 9.950 on the event at the Big Ten championship.

Sports Information Director of the Year

Criteria: Nominees are individuals who can be described as responsive, attentive to the media’s needs, maintains the team website (is always timely when adding coverage links) and even goes above and beyond their job description when setting up interviews or providing necessary information, for example.

As a media organization, we work closely with teams and sports information directors to do our jobs. And while, appropriately, most of the focus during the season is on the teams and gymnasts, we don’t want the hard work these individuals do behind the scenes to go unnoticed. UCLA’s Liza David goes the extra mile every single week when it comes to providing access to her team. She not only kills the social media game (how many floor routines went viral this year?!), but she is responsive and forthcoming with information as well, making our jobs easier.

While David received the most votes from our editors, we wanted to highlight all of our nominees in this category because we feel like SIDs are the true unsung heroes of collegiate athletics. Whether it’s going the extra mile to set up interviews, emailing frequently with updates (or to say there still isn’t one) or making it possible for us to cover meets in person safely during the pandemic, we appreciate all the SIDs have done this year to keep college gymnastics running.