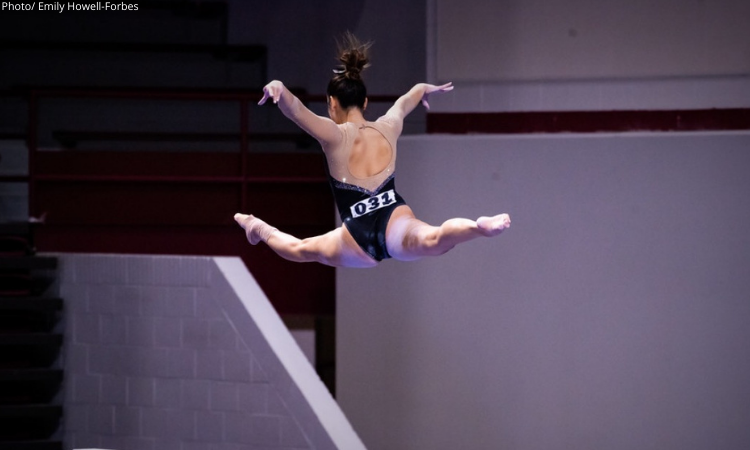 It’s time for one of the most competitive battles of the weekend with all four teams capable of earning high scores and advancing to the next round. Alabama is considered the lock out of the group for day three, but the second spot is wide open.

Arkansas is having a remarkable year and has scored two program record scores but will need to have a stronger performance than it had at the conference championship. Bailey Lovett may be limited to beam if she competes at all due to elbow pain. The Razorbacks will need athletes to step up in her place.

Iowa and Iowa State are two of the best floor teams in the country. Addy De Jesus, Maddie Diab and Andrea Maldonado lead the way for the Cyclones. Iowa finished the regular season at No.1 in the Big Ten on floor. Lauren Guerin is a contender for the national championship title on the event and has been waiting on her opportunity for a 10. Guerin’s chances of making it to nationals as an individual on the apparatus have also increased with the absence of Auburn and Derrian Gobourne.

Beam will be an event to keep an eye on. Iowa State has had a few disastrous meets there, and Iowa fell twice at Big Tens. To qualify to day three, neither can afford to count falls.

We love leotards at College Gym News, but there is nothing like a leotard choice with meaning.

As we approach the 10th anniversary of the devastating April 2011 tornados, we are wearing these leotards today in honor of the resilience and strength our community has always shown in times of crisis … #TTownNeverDown#NCAAGym #BamaStrong #RollTide pic.twitter.com/Tsu85JDFQM

Doggette (Alabama): Full turn, Bhs loso, soft knees but solid landings, beat to switch half, under rotated and large balance check, side aerial to a full, small hop back. 9.825

Seems to be a large delay on Floor.

Kaji (Iowa): 1.5 through to double back, low chest on landing, incredibly dynamic on this event, lacks some flexibility on leaps. double pike, nicely done. 9.875

O’Hara had a huge routine for Arkansas.

Henderson (Iowa): solid routine with a front tuck through to double back to end. 9.925

Guerin (Iowa): fantastic full-in, great flexibility and height on her leap pass, front tuck through to double back, short and has take a step forward. Not sure it’ll be enough for nationals. 9.875

Really great gymnastics all-around for all four teams. Arkansas had a rough start, but had a fantastic ending to its rotation. O’Hara and Hambrick both scored above a 9.900 to finish it off. Bars is arguably Arkansas weakest event, so it will be happy to get that over with. Arkansas is clearly in the lead with perfection from Blanco and a solid performance from Gaskins. Iowa State and Iowa performed to its standards on its respective event. Both programs were arguably on some of its best events and will need to keep up the quality for the remainder of the competition.

Guerin (Iowa): FTY, opens her hips up nicely. lacks control on her hop back.

Klopfer (Alabama): Huge Double Back, Tour Jete half Popa, RO 1.5. to Front lay, understates it and sits it down, double pike, nicely done.

Its so wonderful how somehow all four events happen to be at an extended pause at once.

Shaffer has had multiple balance checks on beam for Arkansas, .

Gaskins (Alabama): Double layout, under rotates and lands with her chest super low,  Switch ring to switch half, Front to double back, hop forward with a shorter landing. I live for her toe point. 9.800

De Jesus (ISU): Step-out to Ray, great amplitude, good Bail, A tad short on final handstand, DLO, soft knees and a hop back. I’m assuming she missed a connection or SV issue because her score is only a 9.575.

Arkansas did not have the strongest beam rotation, but the Razorbacks were able to get through the rotation without a major disaster and a fall. Kennedy Hambrick helped lead the team to second place over Iowa. Alabama struggled on some landings on floor and will need to work on those for day two. Hambrick and Blanco are two athletes watch for the all-around title. These athletes are having exceptional meets so far.

Adams (Alabama): FTY, Short and lands with a low chest and hop forward. 9.675

Fantastic routine for Turner on BB

Rough start for Iowa on Bars. 9.650 from Henderson and just had a fall from Rodgers

Rough rotation for Alabama and Iowa so far here.

Shaffer (Ark): Double Pike, her knees gave out, 1.5 to front lay, not even close and has a second fall Tour jete popa, good, Double Tuck, bails and does a single tuck. Smart decision. 8.000

Bars camera is just not on anymore, but Horowitz was solid on beam. Horowitz went 9.775

Rotation three was the weakest of the competition quality-wise so far. But we have a close one here and this regional is certainly living up to its hype. Alabama had a rough vault rotation with multiple short landings. Arkansas was able to takeover the lead from Alabama with stellar floor routines from Carter and Hambrick. Iowa had a slow start, but was able to finish strong with routines from Kaji and Kenlin. Iowa’s impressive finish pushes them to a tie for second with Alabama. Iowa State had a decent rotation on beam with a good lead-off performance from Steinmeyer.

Steinmeyer (ISU): Fhs double twist, Popa, Back 1.5 to front lay, nicely done, Really scary fall on her double pike. Landed face first and is being attended to by medics. She is getting carried off the floor now. 9.100

Doggette (Alabama): Huge amplitude on her Tkatchev to Pak Salto, gorgeous final handstand, DLO, stuck landing. That may do it for Alabama over Iowa. It’s a 10.000 for Doggette and will be her first career 10.000 as well.

Alabama set a program record on bars with a 49.675 and will be advancing to day two.

Kenlin collided with the beam on her  mount/ prior to mount and is bent over talking with her coach right now.

It's OK. Adeline and I both recovered. pic.twitter.com/53SLZFArGq

Kenlin (Iowa): Collects herself and restarts. bhs loso, solid, nice leap series, Front aerial to cat jump, fantastic, ends with a ro 1.5, stumbles on the landing. Great to see her get back up on the event. 0.000.. Took too long to re-mount the apparatus.

The sophomore class was the story here today for Alabama. The Crimson Tide struggled on the power events of vault and floor. However, Doggette and Blanco were able to come up with perfection on bars and beam respectively. With a program-record on bars, Alabama was able to take the competition over Arkansas. Arkansas will be pleased with its comeback meet from SEC Championships. The Razorbacks struggled a tad on bars to start off the competition. However, they were consistent across the board on the other events. Kennedy Hambrick had a fantastic all-around competition.Claire Kaji had a career competition for Iowa with 9.875 plus on every apparatus she competed on today. Iowa State had a decent competition, but had too many scores in the 9.700’s to advance further.