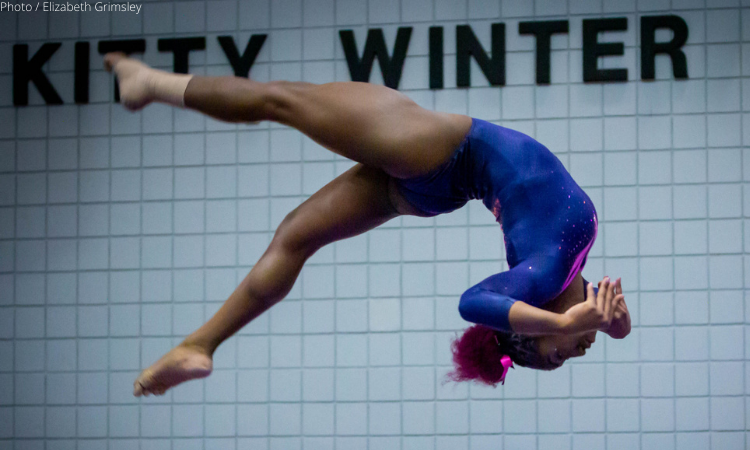 The afternoon session of SECs got a little smaller on Thursday as Georgia announced that COVID protocols would keep it from participating today. But fear not, this will still be an exciting meet. No. 14 Kentucky and No. 15 Auburn are fighting to maintain their top 16 rankings going into the postseason, while No. 23 Missouri would love nothing more than to be a surprise victor here after struggling with injuries this season.

Auburn’s stars this season have been Derrian Gobourne on three events–but her floor is the can’t-miss routine of the entire session–along with Gabby McLaughlin on beam and Drew Watson on vault. Kentucky is led by all arounders Raena Worley, Josie Angeny and Bailey Bunn, but keep an eye on Cally Nixon on vault and bars as well. Amaya Marshall and Sienna Schreiber lead an improving Missouri team, but Alisa Sheremeta is sure to be a highlight on beam and floor.

T-5 minutes and we have no lineups from any team. I’m planning to watch the main stream for the most part, which may have some split screens every now and then, but I’ll keep the all around feed on a smaller screen to the side.

I’m a little thrown by them starting the feed off with the tri-screen but they’ve switched to just one now, thankfully.

Schreiber FX: Front full to front layout to stag jump, clean. Rudi to back tuck (should’ve been a layout) to punch front, she was very off balance on that last pass and had to downgrade. 9.775

Magnelli VT: Front pike half, nice in the air but overpowered and has to take a large hop back. 9.7

Piper Smith UB: Maloney to Pak, some form issues on the Maloney. Short on her half turn on the low bar. Handstands pretty good. Pretty DLO! A little underrotated and takes a hop forward. 9.775

Marshall FX: Front tuck through to double pike, good landing. Back 1.5 to front pike, some leg separation on the twist. Double tuck to finish, a little low but lands it well. 9.775

Angeny VT: Beautiful Y-full! A slight shuffle back on the landing. 9.85

Nixon VT: Started the twist a little early but huge, gorgeous Y-full. Overpowered and takes a hop back. 9.775

Patterson VT: Front pike half with a hop back, very pretty in the air. 9.9

Gobourne UB: Huge Tkachev, misses her grip on her Pak but somehow saves it?? Wow. Huge FTDT, stuck. That was an amazing save. 9.85

Mizzou only going five up on floor, Schaffer looks upset on the sidelines so I’m not sure what happened there.

Kentucky had a fantastic vault rotation but it could’ve been even better with some better controlled landings. Auburn won’t be happy with that bars score considering it’s usually one of their better events.

Oldham BB: Missed the beginning, saw a BHS LOSO. Form issues on her 1.5 dismount and she takes a hop to the side. 9.775

Patrick VT: Pike Y-full with a large hop back. 9.7

Bunn UB: Blind to Jaeger, not a ton of amplitude and her feet are flexed. Nice bail handstand. Last handstand is short. Pikey DLO with some leg separation, stuck. 9.8

Gobourne BB: BHS LOSO with a check. Hitch kick to side aerial, another check. Double twist dismount, has to wave her arms around to hold the stick. 9.725

Nixon UB: Shown at the same time as Gobourne BB so I missed a lot, but her dismount was high and gorgeous with just a small hop back. 9.85

Luksik UB: Beautiful first handstand. Ray is nice and then she almost goes over on a handstand but saves it. Stuck DLO with legs glued together, maybe a small right foot movement but I think they’ll count it as a stick. 9.725

Watson BB: BHS LOSO with soft knees. Cat leap to side aerial, solid. Switch leap to split jump with a lean in between, not sure if she’ll get that connection. RO 1.5 dismount, stuck with a lean. 9.8

Sylvia BB: Front aerial BHS BHS, good toepoint throughout. Switch leap to sheep jump with a small check. BHS swing down is lovely. Gainer full off the side, stuck. She’s a joy to watch! 9.85

McLaughlin BB: BHS LOSO, solid. Switch leap to straddle 1/4, pretty. Small check after her full turn. Side aerial with a large check, misses connection to straddle jump. Gainer pike dismount, stuck but with her chest down. 9.575

Stevens BB: BHS LOSO, solid. Cat leap to switch ring but she barely even bends the back knee. Her signature front toss to knee skill is a little shaky. RO 1.5 dismount, stuck. 9.9

Auburn was lucky to score over a 49 there after a relatively shaky rotation. Meanwhile, Kentucky is cruising with a consistent 49.200 on both events so far, but they’re heading to beam next.

Magnelli BB: BHS LOSO LOSO, solid. Hitch kick to switch straddle quarter, legs not even in the air. RO 1.5 dismount, a little short and takes a hop back. 9.8

Sabados FX: Front double twist, a little messy in the air. Back 1.5 to front full, again slightly messy but she has a clean landing. 9.825

DeGuzman BB: Wolf turn to open. BHS LOSO, very floaty and pretty in the air but has a small check. Front aerial, solid. Switch leap to sheep jump, another small check. RO 1.5 dismount with a hop back. First collegiate beam routine for her! She looks thrilled. 9.775

Brusch FX: Front tuck through to double tuck, maybe a little short but clean landing. Leaps not fully 180. Double pike was low in the air but she somehow overrotated it and had to take a large step back. 9.85

Patrick UB: I only saw the dismount but it was a very pretty and stuck DLO. 9.775

Saw a little bit of Schreiber on UB in the split screen and her dismount looked great! 9.825

Angeny BB: BHS LOSO LOSO, solid. Front aerial a little low and with a small check. Side aerial to back tuck finish, some leg separation in the air but stuck. 9.85

Gobourne FX: High, open double tuck, her front foot slides back on the lunge. Front full to front layout, shuffles both feet on the landing. Double pike to finish, a little underrotated but she manages to have a clean landing. 9.9

Auburn scored a 49.350 on floor to close the gap to only 0.200 going into the final rotation, so this is shaping up to be an exciting finish! Missouri isn’t too far behind the other two, but the Tigers are heading to beam which is never a fun event to finish on.

Payton Smith VT: Y-full, some bent knees in the air and lands it short, has to take a large step forward. 9.675

Albores FX: Missed the first pass due to tri-screen. Front layout to front full, clean. Double pike is a bit low in the air but ends up overrotated with a large lunge back. 9.725

Piper Smith VT: Y-full is clean in the air but doesn’t get a lot of distance. Small hop in place on the landing. 9.775

Sabados VT: Another Y-full, clean in the air with a hop back. 9.8

Watson VT: Y-1.5, slightly underrotated with a diagonal hop back. 9.8

Gobourne VT: Y-1.5 very nice in the air but too much power and has to take a large lunge forward. 9.85

Bunn FX: Double pike, stuck in place without a lunge. Back 1.5 to front pike, another great landing! Rudi to finish, slightly soft knees in the air but yet another good landing. Great routine. 9.9

Stevens VT: Y-full, overpowered with a large hop and a step back. 9.675

Marshall BB: Front toss, foot slides off a bit but she controls it. Front aerial BHS BHS, solid. Split jump to straddle 1/4, maybe a slight check in between but I think she’ll get the connection. RO 1.5 with a couple tiny steps to the side. 9.8

Angeny FX: Double pike is slightly underrotated. Back 1.5 to front layout, the front lay was a little low. Double tuck to finish, again underrotated with chest down on the landing. 9.75

Sheremeta BB: Missed the beginning. BHS LOSO, right on. Split jump to ring jump, not a great ring position but this is college so it probably won’t matter. Front aerial with a bent leg, but front toss is nice. Gainer pike dismount, small step back. 9.85

Angeny’s score has clinched the meet for Kentucky!

Schreiber BB: BHS LOSO LOSO, solid. Switch half to split jump to beat jump to back full dismount, what a combination! 9.925

What a meet for Kentucky! Auburn didn’t have the vault rotation to stay in it, but Mizzou put up a 49.275 on beam to beat both other teams on the event and move much closer to Auburn in the final standings.