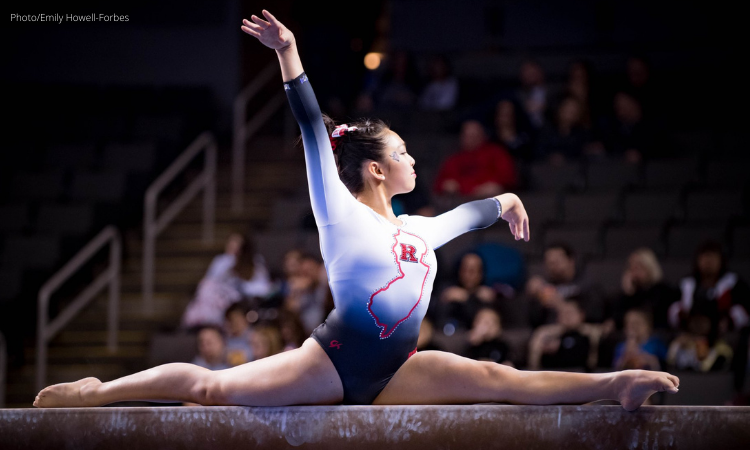 Hello and happy Saturday, friends. Minnesota is at home in the Pav taking on a team that isn’t Iowa for the first time in almost three weeks, so buckle your seatbelts and prepare for a new conference face off. I’m reporting live from the Pav again, and it feels worth mentioning that I feel extremely grateful to be here this season.

Let’s start with the Gophers. This is a team that is more than capable of a big score if they hit on every event; the problem is they have yet to truly do that. There seems to be at least one event every meet that proves to be at least semi-problematic. Perhaps most strangely, the event that makes me the most nervous to watch is beam, which is a far cry from how I felt watching this team last year. The absence of Sales in that lineup is noticeable, although Lexi Montgomery has improved consistently throughout the season, and Abbie Nylin is proving to be a dependable option as well. Bars is the other event that seems to be the shakiest, although there are some fabulous routines in there when everyone hits. Floor and vault continue to be standout events, although Halle Remlinger’s absence last week was definitely noticeable as well. All in all, the Gophers can easily hit 197-plus when they make it through a meet without needing to count a sizable mistake, so let’s hope that today shows just how much they are capable of.

Rutgers, which has an extremely young roster (12 freshmen!) is still trying to figure out what lineups work best. However, the team has consistently improved on its performance each week and will be looking to continue that momentum today. Hannah Joyner and Belle Huang continue to be all stars for the Scarlet Knights, with Calah Newman also stepping up with some big scoring potential—earning a scholarship for her hard work.

As Emily M pointed out last week, the Big Ten has a United as One campaign this academic year. It appears that each team is designating one home meet as being part of that initiative, and it looks like Minnesota will be doing that today.

They released this video today as well, narrated by the athletes and filmed by freshman Ella Sirjord:

Our leo for tonight's matchup on @ESPNU! pic.twitter.com/kObrjGN1G8

Wow, intros kicked off at 4:40; perhaps ESPN being here will lead to a Big Ten meet actually starting on time!?

An interesting in-house tidbit I doubt they will show on the broadcast: they are playing the Black national anthem in honor of Black History Month: Lift Every Voice and Sing.

Notably absent from the Rutgers bar lineup… Belle Huang. Trying to see if I can even get eyes on her – kind of at a difficult vantage point for IDing gymnasts.

Hooten (MIN): Y1.5 with a big step forward. Nice to see her having too much power as opposed to too little here. 9.875

Newman (RU): clear hip to tkatchevm good. Bail to handstand was sharp. Blind full into double back dismount, little slow on the full. 9.725

Koch just went on vault in an exhibition but she did not wait until Joyner was finished so that was confusing.

Stats feed is not working and they are not posting scores in the arena so hang on tight folks.

Super solid start for Minnesota on vault; that was possibly the best vault I’ve ever seen Ramler do. She really set Loper up for another 10 there, alas it was not meant to be today. Rutgers had a solid rotation as well, I believe that is a season high on the event for them.

Loper (MIN): Held that first handstand nicely. Pak nice and floaty. Looks like she took one extra swing on the low bar. Finishes with a nice blind full double back, small hop. 9.775

Sales (MIN): Beautiful handstands to start from Sales, as usual. Little archy before her markelov. Tiny bit short on the final one. DLO hop back. 9.875

Both teams had good rotations here and are on pace for good scores. Both vault and bars scoring was a wee bit generous for both teams if I’m being honest, but at least it was the same across the board.

Montgomery (MIN): BHS LOSO, soft knees but solid. Full turn was controlled. Beat jump straddle half, tuck. Punch front, big bend at the waist, touches the beam. RO 1.5, lands a little short and takes a step back and to the side. 9.125

Zanella (RU): Double back to open, under rotated and lands short – takes a step forward. Back double full, some loose legs in the air. Last pass was good. 9.700

Loper: BHS LOSO, beautiful. Front toss beat jump, good. She’s struggled with that combo this season for some reason. Switch leap switch side, good. Finishes with a RO 1.5, tries to hold the stick but leans forward. 9.900

Nylin (MIN): This beam music is a choice. So upbeat. Full turn good. BHS BHS LOSO, right to the end of the beam but good. Hitch kick switch side, good. Finishes with a RO 1.5 and a hop forward. 9.850

Newman (RU): First pass is a double pike, lands with chest a little low. Double back with with a scoot back. Good straddle position on her leaps, possibly a bit shy on the final one. Finishes with a 1.5 to front lay, good.

Huang (RU): Starts with a front double full, lovely per usual.  Rudi to LOSO, not a lot of power or something because her knees were super bent there. Front 1.5, great control on the landing.

If I am being honest, that 9.875 for Ramler was a wee bit generous, but aside from that it was a solid rotation. Lovely lovely routine from Korlin-Downs especially. Rutgers had a solid floor rotation as well and is on pace for another season high if they can hit beam.

LeNeave (MIN): Double pike to open, controlled lunge back. Switch half + wolf 1/1, maybe a bit short on her split position there. Nice second combo pass. Finishes with a double back, cowboyed but good landing. 9.825

Ramler (MIN): Ring full to open, nice. Double pike, controlled lunge. Pretty switch ring position through to switch half. RO 1.5 through to 2/1, legs a little loose but good landing. Finishes with a 1.5 to front lay, pretty. Solid routine, pretty much her normal here. 9.900

Loper (MIN): Front lay to rudi, great control and good form in the air. Switch ring tour jete half, looked good. Second pass a 2.5, small controlled step forward. I don’t know how that isn’t an E pass, but its fine. Finishes with a 1.5 to front lay, step to the side.

Great day for both teams! 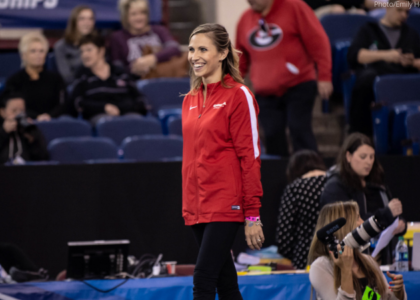