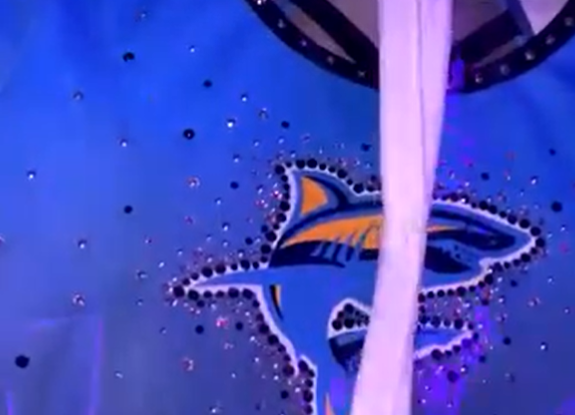 We’re all here for one thing, but I happen to know a lot about New Hampshire right now due to live blogging both of its two previous meets this season. Let’s talk about that first! The Wildcats are looking promising, with heavy contributions from a strong freshman class (plus transfer Kenadi Brown coming soon) and led by sophomore all around pair Robyn Kelley and Kylie Gorgenyi. Make sure you catch technically spectacular junior Hailey Lui, too.

But today is realistically all about the Long Island University Sharks’ debut on the NCAA scene. This is a massively talented roster, and we don’t know a great deal about who we’ll see in lineups. All eyes will be on beloved international elites like Mara Titarsolej and Talia Folino, but you can expect the (slightly) more experienced transfers to get lineup time and settle the young team. The one thing we know for sure is that Nika Takagi has recently mentioned that she expects to compete bars and beam early in the season and add vault and floor later on. The Canadian Bridgeport transfer has never competed in college, having struggled with injury in her freshman year, but she’s massively talented and beautiful to watch. Another thing to watch is that Folino only very recently traveled to the US to join the team. This could mean that she’s not quite ready for lineups, but on the flip side, she could have actually had a less interrupted preseason in Australia than her LIU teammates.

Regardless of lineups, I’m one of perhaps a majority of NCAA gymnastics fans who have never personally witnessed a new team joining the fray, and I’m sure you and I both consider ourselves lucky to get to witness something so uncommon.

Apparently “a lot” of the LIU team has had COVID and their preseason was very interrupted, so we’re moderating expectations.

LIU starting hot with a five-up vault rotation! Apparently Jah’Liyah Bedminster was hurt in warm up and a few other athletes, including “some from other countries,” are currently NCAA-ineligible. I’m assuming that means Talia Folino, who just entered the country, until we have more information. A few UNH athletes are also in quarantine.

Miller (LIU): FTY, piked down with a dive to one side but avoids taking more steps. 9.375

Kelley (UNH): Clear hip to Gienger, clean, bail with leg separation. Shy on a handstand, blind full with arched back to double back with a step forward. 9.65

Loo (LIU): FTY, two steps back before falling and safety rolling out. Much higher vault than the first. 9.225

DeVincenzo (UNH): Slightly closed shoulders on the first handstand, peels backwards after her Maloney and lands on her stomach, mat scoots substantially backward with her. That was funny. Pak with major leg separation, might have hit her feet down there, missed a handstand, good double lay with a little hop back. 8.8

Lui (UNH): Maloney with leg separation, toe on to bail with leg sep again, loose blind full to double back with a step back. 9.7

Bauman (UNH): Blind to Jaeger to overshoot, commentators think she hit her feet on the ground, blind full double back with a hop. 9.55

They have to sanitize all the equipment before warmups so I’m just gonna go ahead and play some Minecraft. This meet is moving SO SLOWLY.

Biette (UNH): Soft on the table, no height on her FTY, lands with her elbows down almost immediately. 8.725

Miller (LIU): Blind to bail to toe shoot, clean until the end which was a little close, pretty double lay with a hop back. Not a 10.0 SV but a good start. 9.5

Okay, good Tkachev, clean Pak, gets stuck halfway around on her blind full and jumps off. Blind full to flyaway. 8.65

McDonald (UNH): Overpowers her Yurchenko half and falls. Counting a fall now. 9.25

Takagi (LIU): She was my favorite as a Bridgeport freshman and I’m so excited to finally see this routine in competition. Great first handstand, blind to pike vault, misses a cast and has to try again. Toe blind to straddle back, good, she has so much potential on this event. Toe on front layout 1/2, comes in short and puts her hands down. She’s done a pike before, maybe she couldn’t find the pike shape and that’s why that was a challenge to rotate. 8.45

Graver (UNH): Sloppy on her FTY, loose legs and pikey, couple steps to one side. 9.45

Lapp (LIU): Great first handstand, Maloney to Pak, slightly bent elbows but works through. Ugly half turn on the low bar, this is why we do switch kips here in the NCAA, double layout soft on the landing with a big step forward.

DeVincenzo (UNH): Yurchenko… 3/4? She landed fully sideways and stepped it around.

Koopman (LIU): Apparently she took three years off training bars, so this should be fun for her. Clear hip, archy, to true shap with form and hits her feet on the overshoot. Missed a handstand, clear hip FTDB low but hit with a hop in place. 9.6

This is pretty unglamorous, guys. The stream is barely keeping up, we saw some vaults from the bars camera, the live scores still don’t work. Definitely growing pains. UNH is basically having a UCLA-style exploring depth meet today.

Koopman (LIU): BHS LOSO with a bit of knees but really solid. Tuck full jump beat jump, side aerial with a bend check, switch leap, gainer full off the side. 9.525

Ricketts (LIU): She’s gorgeous on this event. Side split mount, front aerial with a sketchy connection into a split jump. BHS LOSO pretty, step, switch switch split is gorgeous. Her splits are so natural. Full turn, side split 1/2, side aerial tuck 3/2 dismount with a big side step off the mat. 9.55

Barrington (LIU): Full turn, tentative, BHS LOSO good. Switch split a touch short, cat leap side aerial split again short of split. One and a half twist and the MAT SLIDES and she takes a step back. I wasn’t a gymnast but you’ve gotta imagine that the athlete’s stomach drops out when they land on a sliding mat. 9.55

Lui (UNH): Lovely control on her front double full to pique arabesque, solid leaps. Round off LOSO for the tumbling requirement, front lay to Rudi with a touch of leg form. 9.775

Doten (LIU): Ring jump to beat, I’m not quite sure if the front leg was high enough, tentative but clean BHS LOSO. Y turn a bit uncertain, split half to split great, cat leap side aerial layout full piked down but stuck. 9.75

Lapp (LIU): BHS LOSO gorgeous, moves her front foot a touch. Nice handstand choreography, front aerial to double stag. Full turn, one and a half twist with a big hop. 9.8

Bauman (UNH): Two and a half twist, leg form but well landed, the landings on her leap series are so ambiguous that I can’t even tell what it was meant to be. One and a half front lay with bent knees.

Great 6/6 beam showing for the Sharks, with a lot of technical proficience as well. Scores should rise here over time. UNH had a few different athletes in floor to usual but got through clean enough.

Graver (UNH): Cat leap side aerial, wobbly, BHS LOSO with about four steps back. Full turn, split to sheep, side aerial back full with a bit of form but stuck. 9.5

Cohen (LIU): One and a half front lay, hair choreography is always a winner. Switch side Popa split full, little hop, rebound on her double back and puts her hands down. 8.95

Koopman (LIU): Triple twist great! Switch to Shushunova, double turn to tuck 1/1 jump, two and a half front tuck with a deep squat but stands it up. 9.25

Lapp (LIU): Deep double pike, lovely choreography. Switch ring switch half wolf full great, double wolf turn, Jahliyah Bedminster is following along with the choreography and knocked her water bottle over on the sidelines, side hop on her combo pass. 9.675

Lui (UNH): This routine has more acro skills than you’ll see anywhere else in the NCAA. Front aerial to split lovely, BHS LOSO with a bend check, full turn, side aerial, side somi, switch split with oversplits visible in real time. One and a half twist planted. 9.825

Goldberg (LIU): Messy Rudi with a side step, not clear if that was in bounds. Switch half wolf full-ish, random back tuck, solid last pass.

That was the longest dual of my life and I’m too tired to have emotions.