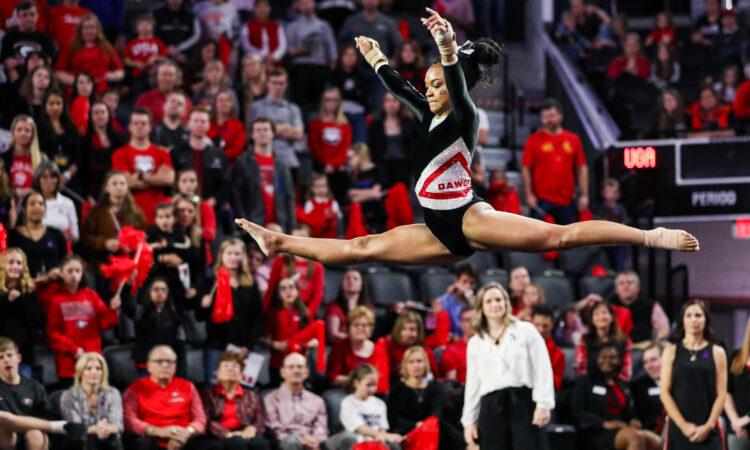 Georgia rebounded last week but still has a long way (and some key injury recoveries) to go on the road back to 197. Home scoring tonight could be beneficial, but the Gymdogs can’t afford the same landing issues and shaky beam performances they’ve struggled with all season. Those will be the key to comfortably defeating the Razorbacks (getting Mikayla Magee back would also be a big help).

But Arkansas will likely make it a close matchup tonight. The Razorbacks showed they can handle a tough road environment when they nearly took down LSU in Baton Rouge. Tonight’s performance will be another key confidence test as the Razorbacks seek to cement themselves as a top10 contender this season.

Just waiting for the stream to start as we finish up in Gainesville. Florida just scored a 197.850.

Cashman (UGA): Nice full, not the biggest but a solid landing with a small hop. 9.800

Shaffer (Arkansas): Really killing it with the handstands, beautiful Maloney, tiny hop back on the DLO. 9.750

Hambrick (Arkansas): Missed the release but hit, good handstands, sticks the FTDLO. Good one but these bars scores are a little tight. 9.850

LOL on the SEC graphic Kennedy Hambrick was listed as “Kaitlin DeGuzman.” Nice try with definitely the right team.

Georgia continues to bounce around on vault but they’ll take the 49+ score. Arkansas looked a little better than the scores would suggest IMHO, but still some handstands to clean up.

Schild (Georgia): Cast handstand goes a little over, release close to bar, this is a little laborious. Nice last handstand, pretty DLO with a tiny shuffle.

Gianfagna (Arkansas):
Just had an internet issue and missed a bit of the stream.

Apparently there was an interesting bars miss while I was away. Must check back.

Elswick (Arkansas): NEARLY sticks the FTY but a small hop back. 9.850

So far about as tight as we’d expected. Looks like there was some Shaffer vault score confusion which tends to happen every single time she competes.

A season high vault score for Arkansas looks like.

Johnston (Arkansas): Double tuck nice and open. 1.5 to front full. This is an excellent leadoff routine. Switch half to straddle full, so far this is great. Double pike strong ending. 9.875

Finnegan (Georgia): Perfect BHS LOSO. Side aerial to wolf jump, slight hesitation between the elements but I think she’ll get credit. Leap combo tiny hesitation. Back 1.5 small hop back. 9.825

Hickey (Arkansas): Very dramatic music. Double pike chest slightly down. Back 1.5 to front lay a little bouncy but controls it. Double tuck, could tell she was a little tired at the end. 9.850!

Hambrick (Arkansas): Double tuck hop back, a little too much energy again. Little short on the straddle leap. Double pike really big and a better landing. Love her final pose pounding the floor. 9.850

Oakley (Georgia): Love the choreo from wolf turn position to straddling the beam. Triple series NO hesitation. Switch half to ring jump, small check. Full with a small step. 9.825

Gianfagna (Arkansas): Nailed BHS LOSO, same with full turn. Falls on cat leap to front toss, didn’t have a chance sadly…Straddle jump great extension, shuffle back. Not the way you want to open when you’re leading by this little. 9.075

Perez-Lugones (Georgia): Mix up with her music so she has to wait a minute. Not sure whose sax this is but I’d be glad it’s not mine LOL. Oh love her dance to begin. Big double pike chest slightly down, sticks it! Back 1.5 to front lay. Straddle full to wolf full, really big. Double tuck. Great way to set the tone for what is sure to be a fight. 9.875

Apparently the sax was her music last year. 💀 How did I forget?

Lovett (Arkansas): Nice extension on her switch to spli. Aerial to BHS no hesitation. Back full sticks it. Missed the series but it seemed good and like she got it on track. 9.925

de Jong (Georgia): Back in the lineup this week. Double pike good open. Back 1.5 to front lay. Back tuck opens a little early and hops back. Don’t want to give away these tenths! 9.825

Lukacs (Georgia): Double layout a little wonky on the second flip but gets it around. Double pike and nearly sticks it. 9.850…with that DLO…?

Shaffer (Arkansas): BHS LOSO decent sized check but saves it. Another tenth you’d want back. Back full a little bent and tries to hold the stick but can’t. 9.800

Cashman (Georgia): Double pike to her knees! Uh oh. Back 1.5 to front lay picks it up. Switch half to straddle, good positions. Really nice to see her back. Double tuck good height and landing. Welp, the pressure is on now. 9.275

Carter (Arkansas): BHS LOSO hesitates. Glorious sissone position. Sticks the back 1.5, this will be good getting down to the end. 9.800 must have missed something…

Hawthorne (Georgia): Okay HER name on the score sheet is Kendal Moss. Where are y’all getting this? @SEC Network. She ignores the blatant mislabeling for an amazing double pike, Rudi also great. Double tuck strong to end. 9.800

Hambrick (Arkansas): BHS LOSO zero hesitation. Switch full to switch half slight hesitation but saves it. Straddle full, another imperceptible hesitation but okay. Remarkably strong in the face of adversity and a nice back full. 9.925

Baumann (Georgia): Wolf double quite beautiful. Double arabian super powerful and she ends up flipping forward out of it, disastrous unfortunately. Back 1.5 to front full and steps a little out of bounds, definitely influenced from that mistake at the start.

And that will give Arkansas its first ever win in Athens.