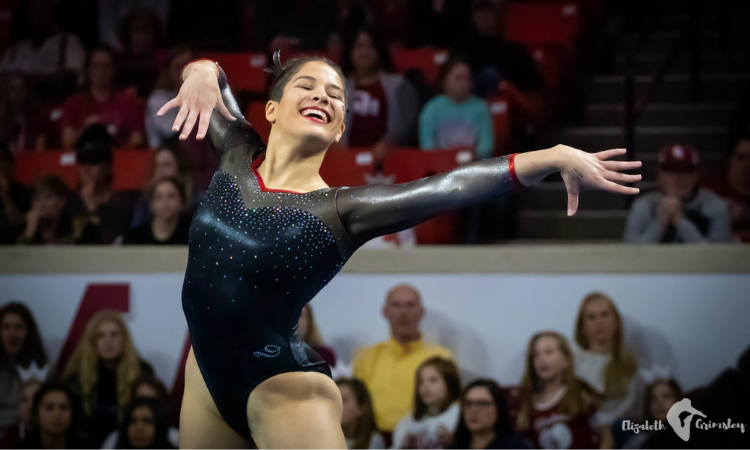 Big match-up here tonight between Georgia and LSU! Although LSU is currently ranked quite a bit higher than Georgia, the Tigers haven’t looked unbeatable this season, and the Gymdogs will certainly be on a quest to claim their first regular season win over LSU since 2016.

LSU had a much stronger outing last Friday than its somewhat disappointing season opener the previous weekend, improving its team total by roughly seven tenths. Haleigh Bryant made her all around debut and scored a massive 39.600 to soar into second in the national rankings. Overall, the Tigers look to be in a much better position than many seemed to think they were after week one, but they will need to continue to focus on details in order to stay above the mid-ranked SEC teams.

Last weekend, Georgia showed its depth and resilience when it was able to maintain a score in the 196-range despite losing star freshman Victoria Nguyen to injury prior to the third event. However, in order to be a real threat to the Tigers, the Gymdogs will need to key in on vault and floor landings as well as demonstrate a confident and consistent beam lineup. There is a lot of room for growth this week and making a few of these minor improvements could be a difference maker in the outcome.

Leading us off tonight on Bars:

Next we move to Vault with:

Baumann (UGA): Small leg separation on blind, Jaeger a bit close, nice transition, double lay flies out a bit and she hops forward. This was her first time ever competing bars! 9.775

Ward (UGA): Shaposh + bail–bail is super short and crunchy, double lay is nice but takes a step back. 9.575

Finnegan (UGA): EXH — Maloney + pak with leg separation and drags her feet through the bottom, dismount landing is also crazy and she takes a few crunchy steps back.

Pretty good first rotation. LSU looked great on vault just didn’t quite get those landings. Georgia made it through bars without a fall, but wasn’t spectacular… Overall I’d say scores look a littttleee high but nothing crazy.

Baumann (UGA): FTY a little crunchy on the table and piked down with a big step forward. Not a great start… 9.625

Shchennikova (LSU): Close Ray with flexed feet, pak and pirouette are fine, double lay pings out with her usual position issues and a hop forward. 9.800

Okay, bar scores got a bit hairy in that last rotation. However, I’d say that the split we currently see between the two teams is accurate.

Desiderio (LSU): Happy to see she’s okay after last week! Great leap connection, floaty bhs loso, full turn with a small check, solid front aerial, cat leap + gainer full with a step and lifts her leg up??? *Makes no wobble set on the beam. Wobbles on the floor* What a gymnast thing to do haha. 9.800

Perez-Lugones (UGA): Big double pike and slides back, whip half + front lay is nice and controlled, leap connection is lovely, another big double back and has to lift up the front leg in the lunge. 9.825

Bryant (LSU): A little off on the front aerial but hangs on and is able to do the bhs out of it, great leaps, confident front tuck, punch Rudi dismount with a small step forward. 9.875

Roberts (UGA): Huge piked full in! WOW! Front lay + front full and hops into a lunge, decent leap pass, double pike but pops her hips open on the take off which makes her land a bit short. 9.800

Hawthorne (UGA): Oh boy! Massive double pike and flies back, front lay + Rudi + split is great! Love this music and set! Just caught myself bopping along to the music lol. Double tuck is is big but opens a little soon and steps forward. 9.800

Baumann (UGA): Wolf turn is a little wonky (but like, when aren’t wolf turns wonky), double pike and bounces back, back 1.5 + front full lands squatty but stays on her feet. She looked really tired through that whole set. 9.600

Dunne (LSU): EXH — floaty bhs loso, front aerial with soft legs, switch + switch half is a bit shy of 180 on the half, gainer full with her chest down and a small step.

Whelp ladies and gentlemen, the scoring has officially gone a bit haywire. Don’t get me wrong, there were some beautiful beam and floor routines! But there were some very obvious landing problems on both events that seem to have gone unnoticed.

Schild (UGA): Pretty press hs mount, front aerial + bhs + bhs with a tiny check, side aerial + flutter jump is good, lovely extended leaps, gainer pike off the end doesn’t rise at all and lands with her chest low with a tiny hop forward. 9.800

Finnegan (UGA): Bhs loso solid, side aerial + wolf is a maybe not connected but these judges will probably take it, good leaps, big RO + 1.5 with a hop forward. Good debut! 9.750

Lukacs (UGA): front toss + flutter is solid, bhs + loso with a slight check and soft knees, hitchkick-y type jump into a switch side, full turn is a little too aggressive, good RO + 1.5 with the smallest little slide forward. 9.800

Shchennikova (LSU): Front double full + scale out of it, strong combo pass, big Rudi + split! That was much better than the last time I watched her. 9.900

Hawthorne (UGA): Bhs loso with a big wobble that she really probably didn’t need to take, leaps a little short and a bit hesitant in the connection, nice turn, STUCK RO + 1.5! 9.800

Desiderio (LSU): Double lay with a pike down but much better landing than last week, combo pass is a little off but she stays on her feet, double tuck and lands superrrr short and puts her hands down. 9.200

Baumann (UGA): side aerial + loso with a big leg up wobble, flutter step out + switch side is an interesting combo, RO + 1.5 with a tiny foot slide and chest down. 9.800

Good meet for both teams. LSU really proved itself tonight and even showed its incredible depth with exhibitions on every event. Georgia kept up fairly well throughout the meet but ultimately, it came down to the same issues it has been struggling with all season — a shaky beam rotation and landing problems on every event.