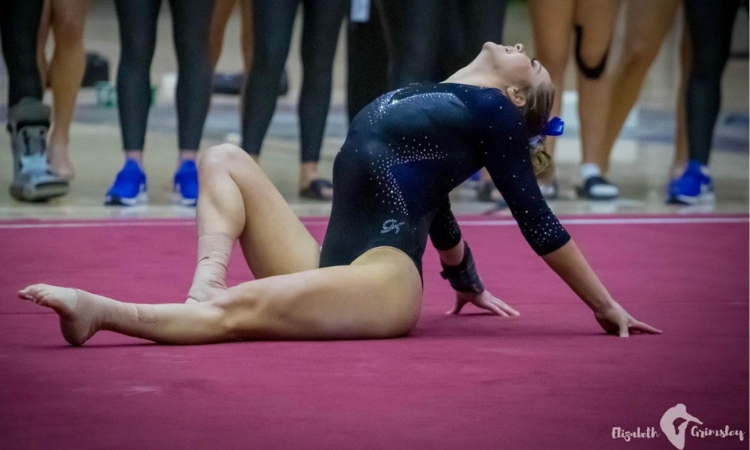 Some may say this SEC matchup is underwhelming, but the youth of these two teams will be under the bright lights in one arena tonight. Who knows, we may just be able to figure out the stars of tomorrow.

Missouri lost key contributors to its lineups but was able to add junior Alisa Sheremeta back on bars, beam and floor after she was absent from the meet in week one due to COVID protocol. Kentucky is a silent underdog in the SEC this season. The team lost performers like Mollie Korth and Hailey Poland, but it put together two solid meets thus far. Raena Worley is much improved on bars, which gives her an increased chance at taking home some all around titles this season. Additionally, Josie Angeny has added floor to her resume to give the Wildcats another all around competitor.

Angeny’s dad made his TV appearance last week with his shirt of his daughter’s face to show support.

literally no one is talking about josie angeny’s dad enough pic.twitter.com/nBd5tLCYHQ

Kentucky is the favorite to win, but Missouri did come close to upsetting Alabama last week. It should be a good one to kick off Friday Night Heights.

Note: According to the Kentucky SID, Ella Warren is not currently training due to medical/personal reasons.

Looks like many of the NCAA gym teams are honoring diversity tonight. Let’s hope this continues and helps push the sport in a positive direction.

Kentucky has had difficulty finding a consistent leadoff on bars so far. Will have to see who gets the call in this competition to make their case for a permanent spot in the lineup. McCrary and Gottula have not debuted their 10.0 SV vaults yet for Missouri. Also of note, Kambrie Brandt has been missing from lineups, so will be watching to see if she appears here and can add her 10.0 SV.

I really like this black, silver and yellow color combination on Missouri’s leotard tonight.

Gottula (Miz): FTY, squats super low on the landing and takes a step back. 9.7

On another note, much respect for her majoring in nursing and competing college gym.

Luksik (UK): Cast handstand, Ray, huge air, bail handstand, ends with a dlo and takes a small step. Kentucky has really nice form in their DLO dismounts. 9.725, hmm that seems low but maybe I missed something.

Schaffer (Miz): Career debut, was a last minute sub for Hufendiek. FTY, pikes down and another low landing but it’ll allow them to drop Swanson’s score. 9.625

It seems like bar scores are tight tonight, but Kentucky also had missed opportunities with their landings. Missouri’s vault rotation was not what they wanted. It was nice to see McCrary debut her Y1.5 this season and hopefully they can improve upon those landings in upcoming weeks.

Well, it’s never good to start the meet with a score in the 48 range.

Kentucky may not have many 10.0 SV on vault, but they do have great execution scores on the FTY’s that are in the lineup. Missouri has a unique bar routine from Sheremeta that is certainly one to watch this season.

Kentucky is ranked No.3 on the vault.

Hufendiek (MIZ): Blind Change to Straddle Jaeger, lacks height short on handstands, bail handstand, good, Giant Full to Double Tuck, stuck. May be her best one of the season so far.  9.75

Christensen (Miz): Short on handstand, Tkatchev, these releases are all very low, bail handstand, gain full to double tuck, takes a step and lands with a low chest. 9.675

Patterson (UK): FHS Pike, she completely missed her hand on the table and just misses hitting her head on the table. very short of rotation and sits it, but she looks to be okay. 8.05

Very happy to see Patterson walk away from that vault for Kentucky. That may be the win of the rotation. Not what either team was looking for again, but both teams were able to rally back after a fall and tally up scores in the 9.8’s.

We have yet to see a score over a 9.9 in the first two rotations and neither team was able to stick a vault landing.

Both these teams are going to want a clean rotation from their athletes on these next events.

Hopefully we can see some more controlled and safe landings.

Angeny and Worley are tied right now for the lead in the all-around competition.

Bunn (UK): Double pike, stuck, switch half to wolf 1.5, Front full to front pike, nicely done, HS Rudi, slightly under rotated but manages to stick it. Will get a deduction for low chest and large knee bend though. That was her 3rd event lead of the day.  9.85

Hagis (UK): This is a fun and very engaging routine, Rudi to back loso, switch side straddle full, nicely done, double pike, hop back. Happy to see her out here on the floor for Kentucky. 9.9

Clarke (UK): Front double full, nicely done, Front lay to front full,  Its’s either my sound or it sounds like her music went out, but she is doing a great jump of continuing. 9.825

Okay John Roethlisberger  is now saying the audio issues are from the arena.

Christensen (Miz): Back into the lineup after being taken out last week, side aerial bhs, off the beam, side aerial full dismount.8.825

These two teams are displaying their inexperience, but are also showing a great deal of potential for the future.

Kentucky has a large lead here, but there is still one rotation left to go!

Kentucky had to count a fall on beam last week after both Magnelli and Patterson fell on a front aerial. The team is also ranked last in the SEC on this event, which is a unique situation for the Wildcats. Missouri ended their floor rotation with a career high from McCrary, but will need to have more controlled landings to improve the event total.

Bailey Bunn was just added to the lineup, so she will be making her debut in the AA.

I think they took out the front aerial, where she fell last week unless I missed it.

Schreiber (Miz): Double pike, large step back, she has great eye contact with the audience/camera. Rudi to back tuck, that was supposed to be a loso. Gets the tuck around nicely though.  9.8

Sheremeta (Miz): Front double full, short on her leaps, rudi to back loso, nicely done. John and Alicia are very excited about the “ninja turtle spin.” Back lay 1.5 to front loso, well done. 9.875

The loso out of the tumbling passes are very aesthetically pleasing.

Patterson (UK): Fell last week and she falls again tonight. Last week she fell on the front aerial. Tonight it was the Bhs loso. Starts with a good full turn, but does fall on that Bhs loso. Has a Balance check on front aerial, switch leap switch leap split jump, nicely done, bhs 1.5, good landing. 9.025

Missouri’s landings are much better tonight on floor than the past two meets.

Worley (UK): Cat leap to switch side, Front aerial,bhs, loso. Somehow manages to connect those despite being slightly off on her front aerial, RO 1.5, Stuck. 9.85

I’m very impressed with how much Worley has improved from her freshman year to her sophomore year.

This Missouri team fights all the way to the end, but was unable to overcome their issues early on in the meet to beat out Kentucky. Neither team will be satisfied with a 195 score, but it seems like many teams are having a rough competition. No. 3 Michigan and No. 4 Minnesota both scored 195’s early on today.