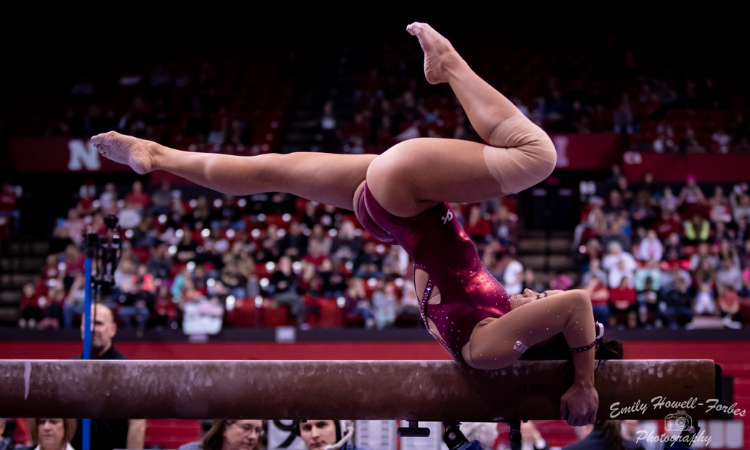 There’s breaking news in the college gym world: In 2021 the national qualifying score for teams will be calculated using the top four scores, with at least two from away meets. In previous years, the 36 teams qualifying to the postseason were determined by taking the top six scores, three of which from road meets, dropping the top score overall and averaging the rest.

There are two aspects to this change. First, the top score overall is no longer dropped. This will likely benefit teams who are well-known for having a home-scoring advantage, which is unsurprisingly a similar list to the teams who have historically been most likely to make nationals.

The second aspect to this change is that fewer scores will count overall. Given that the schedules that have so far been released are showing approximately three fewer meets (or about a quarter of the usual schedule) per team this season, this is a change that makes sense.

While the March 9 Road to Nationals team rankings ended up counting as the final 2020 season order, that doesn’t tell the whole story of the season. There were several teams who still had three or more opportunities to drop low scores from their NQS calculations that would have pushed them farther up the rankings. To illustrate this, we calculated each team’s “upside,” which is their season high score minus the lowest score that was counted in their final NQS. This tells us approximately how much opportunity the team would have had to increase their NQS if they performed at their top ability for the remainder of the season. Here are the Upside values for the top 45 teams at the end of the 2020 season:

Within the top 10 teams, the ones with the highest potential to make a move were Alabama, Utah and Minnesota, but the teams who really suffered the most from the abrupt truncation of the season were farther down the rankings: Boise State and Southern Utah tied with an upside of 1.925 apiece, followed by Pittsburgh, Maryland, Rutgers, North Carolina and Utah State.

Since the 2020 regular season ended two weeks early and the 2021 season will have approximately three fewer meets per team, we decided it would be a fun exercise to apply the new NQS rules to last year’s scores to see how it changed the standings. It might just give us a hint of how things might have shaken out if the regular season had been completed and teams had had more opportunities to drop low scores.

As expected, the new approach allowed the teams with the highest upside to drop scores that were holding them back and move up the rankings. Within the top 10, Utah moved past UCLA into third and Minnesota moved up from 10th to eighth place. However, the top movers overall were Boise State with a whopping eight places, and Maryland, Utah State and Nebraska with five places apiece.

So what does this mean? We’re not trying to rewrite 2020 history—there’s no guarantee that these teams would have scored high enough to make these moves in the standings before the end of the regular season. But they were the teams that arguably lost the most opportunity to improve by the premature ending to the season.

What does it tell us about 2021? This upcoming season is sure to be full of frustration and chaos, with last minute cancelations and unpredictable athlete absences, but with the change to no longer drop the high and to count fewer scores overall, there will be a lot more breathing room than normal. If your favorite team starts out with a couple of lower scores, these new NQS rules will allow plenty of opportunity to make up for it. Don’t panic!