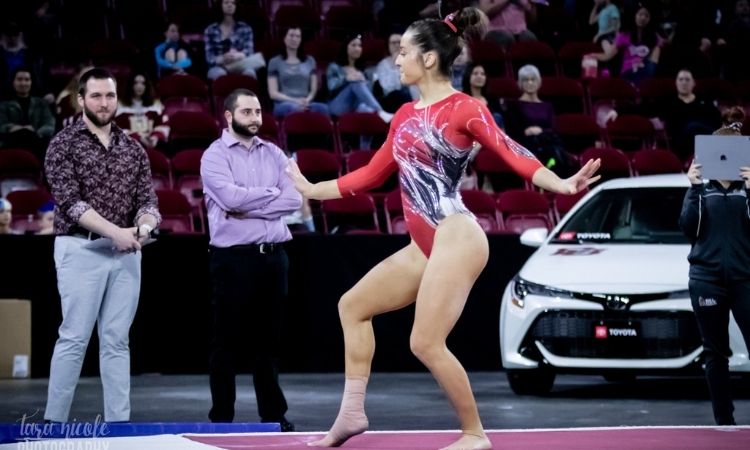 Being as competitive as the MAC is, it should be no surprise to see that most of these teams were separated by mere tenths of a point in 2020. The biggest factor was the fact that the top four teams hit 196 at least once, while the lower three did not. It is not for lack of talent or ability, however, and we will be eagerly watching to see what these teams are capable of in 2021.

To say that Ball State had a great 2020 season would be an understatement. The Cardinals set a program record for team score not once, not twice, but three times, culminating in a 195.850 in what would be their final meet of the season. Despite losing some key routines due to the departure of Rachel Benoit and Maddie MacDonald, the team is poised for another strong year ahead thanks to a strong freshman class.

How It Looked Before: Vault was the Cardinals’ best event last season, and they finished ranked second in the MAC and 26th overall.

How It Looks Now: The Cardinals are not only retaining their entire lineup from last year, but also adding some strong options from the incoming freshmen: Victoria Henry and Hannah Ruthberg both provide strong Yurchenko fulls and Suki Pfister has been training a front handspring pike half, which would be a 10.0 start value.

Trending up, down or too early to tell? Trending up

How It Looked Before: Bars was a weaker event for Ball State, and unfortunately it will be losing one of its stronger routines in Maddie MacDonald.

How It Looks Now: There is a lot of room for improvement on this event, and it’s certainly one where the freshmen could have an immediate impact: Both Henry and Pfister have strong routines that could fit into the lineup nicely.

How It Looked Before: Beam was a pretty good event for the Cardinals, however there were some consistency issues. This is a talented lineup, with some unique skills to watch for (like Arden Hudson’s switch to tuck full and sophomore Taylor Waldo’s front aerial to front handspring).

How It Looks Now: With most of their 2020 lineup returning, the Cardinals should be able to build on what they did last year and even see improvement. Junior Sari Thaler, who was injured and did not compete last season, has a beautiful beam set that would be a welcome addition to the lineup if she is healthy. Ruthberg is another option here as well.

How It Looked Before: Ball State excelled on floor, with fun routines that had both difficulty and fun choreography. Then-junior Claudia Goyco was exceptional here and was named the MAC Specialist of the Year for this event.

How It Looks Now: The Cardinals are retaining most of their lineup and have freshmen that will be more than capable of stepping in to fill the gaps left behind by Benoit and MacDonald. This is the event where Henry will certainly shine; absolutely expect to see her in the lineup.

The Cardinals will be looking to build upon the records they set last season, and have all the tools to do so. They will need to clean up their weaker events—particularly bars—if they want to pose a significant challenge at the conference championship; if they can do that, expect to see them in the conversation for that MAC title and even pushing for a regionals spot.

Eastern Michigan climbed a few spots in the overall rankings in 2020, finishing the season 45th. The Eagles will be looking to build on that ranking in 2021, but will have their work cut out for them after losing their top all arounder in Emili Dobronics. That being said, the already-solid roster should provide a strong foundation on which this talented group of freshmen can build this season.

How It Looked Before: Vault was the Eagles’ weakest event, and Dobronics’ Yurchenko full will be a big score to replace.

How It Looks Now: Molly Parris’ return to the lineup will be critical, as will the freshmen’s ability to step up and hit. Sophomore Mickayla Stuckey had a strong Yurchenko full during her J.O. days, although she has yet to compete on this event for the Eagles. Of the freshmen, Anna Grace McCullough’s Yurchenko full is the most competition-ready vault, although Raisa Boris has one that could be an option as well.

How It Looked Before: The Eagles had some standout bar workers, with Courtney Bezold and Jada Rondeau being the strongest of the pack. However, this was a very inconsistent event overall, with scores landing all over the place.

How It Looks Now: Eastern Michigan is sitting in a good position on bars with eight routines carrying over from last season. Expect to see Boris contending for a lineup spot immediately, as she has a particularly lovely routine that should score well.

How It Looked Before: Beam was the Eagles’ best event, both in terms of consistency and scores. They finished first in the MAC and 28th overall.

How It Looks Now: The Eagles are only losing one routine, and while it will be difficult to replace Dobronics’ consistent 9.8-plus score, there should be enough depth in the returning gymnasts and the incoming freshmen to fill in the gap. Watch for Boris and McCullough to contend for some lineup time here.

How It Looked Before: Floor was consistently one of the Eagles’ best events, thanks in large part to their depth.

How It Looks Now: Eastern Michigan is only down one routine and should expect to see similar success to last year. It won’t be easy to replace Dobronics here, but not impossible. Boris has a full-in that’s worth keeping an eye on, and McCullough and Katie Butler could certainly see some line-up time as well.

The name of the game for Eastern Michigan is consistency. There is a lot of talent and potential on the team, but until it is able to keep mistakes in check, its scoring potential will be limited. If the Eagles can regularly put up clean routines each week and minimize the bigger errors, we expect to see them jump up in both the MAC and overall rankings in 2021.

Bowling Green had a major rebuilding year in 2020 after losing seven seniors and bringing on six freshmen. It is difficult to see improvement when there is that much turnover; as a result, the Falcons dropped a few spots in the rankings. This year the Falcons will be without Jovannah East—which will certainly be a blow—but there is a very exciting freshman class coming into the mix that cannot be overlooked.

How It Looked Before: Vault was a strong event for the Falcons, although they saw a pretty big drop in the overall rankings from the previous year.

How It Looks Now: Losing East will sting on all events, but this is the one where her score is going to be most difficult to replace. Having Seattle Pacific transfer Kayla Chan will be very helpful here. Of the freshmen, Lauren Banister and Sydney Bennett provide the best options, with a Yurchenko layout full and Yurchenko tucked full, respectively.

How It Looked Before: Bars was the Falcons’ weakest event, and the one on which they struggled the most with consistency.

How It Looks Now: Bowling Green is retaining all but one routine from last season, and this is an event where the freshmen could have an immediate impact: Kylie Yacamelli has a pretty routine, as does Bannister, and both could expect to see lineup time.

How It Looked Before: Beam was a pretty good event for Bowling Green, but it will definitely feel the loss of East and Taylor Worthington here.

How It Looks Now: Of all the events, this is the one where the freshmen will feel the most pressure to contribute immediately. Watch for Yacamelli, who has a unique acro series (side aerial to layout step-out) to be the front-runner of the freshmen to get in the lineup. Bannister has a fun acro series as well—a side aerial to front toss—although don’t be surprised if it is replaced with something less risky.

How It Looked Before: Floor was a weaker event for the Falcons, although their scores stayed relatively consistent from week-to-week.

How It Looks Now: While it will be difficult to replace East, they aren’t losing any other key routines, and they are gaining a strong one from Chan. Bannister brings exciting difficulty to the table as well, and we expect we will see other freshmen in the mix for a lineup spot as well.

While 2021 won’t be as big of a rebuilding year as last season, we expect that there will still be some adjustments to make after losing East. Fortunately, there are a lot of strong athletes on the Falcons’ roster; as long as everyone stays healthy, there is real opportunity for growth.

READ THIS NEXT: Potential Lineups: MAC Part I